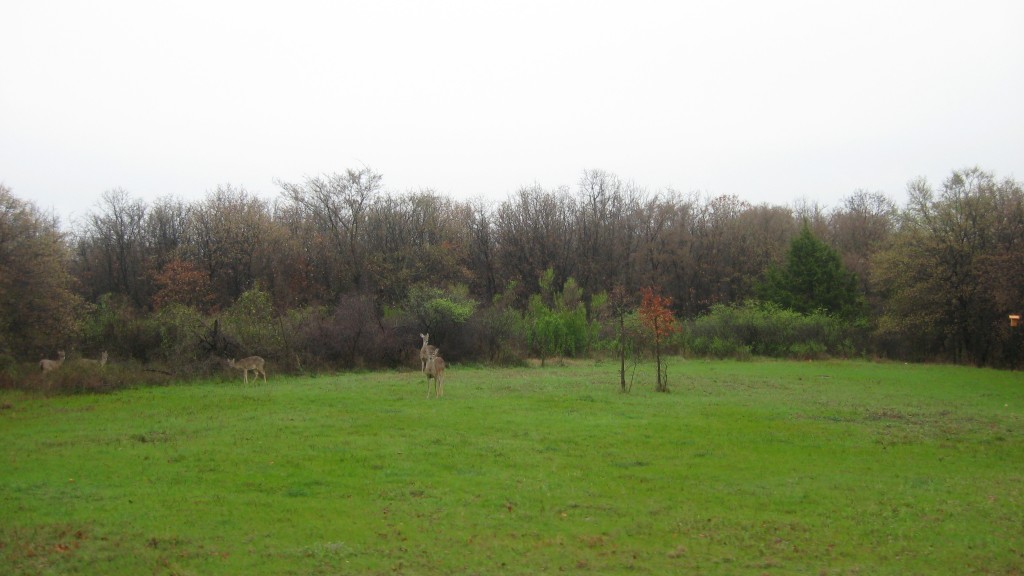 It was a wild wet weather weekend.
Yet, there we were, tent camping in the midst of all that.  Because we’re nature freaks.
No, really, it was because it was a weekend we could not miss, being the first Mega Event (a geocaching event drawing more than 500 particpants) in Texas since GeoWoodstock IV back in 2006. And, because it was the Texas Challenge, an annual competition among regions to see who can find the most caches in a four hour window. We go every year.
This was my fifth time to compete in the Challenge, and it might have been my best year. My oldest son did the competition with me, as well as a mom and teenage daughter that live relatively close to me. The four of us found 22 caches in that time frame, and hiked almost the entire time.
Here is my son along the trail: 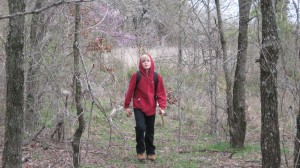 He did pretty good with the hike. However, the weather was not our friend this weekend. It started raining about one hour into the four hour time span, and did not stop for about 24 hours straight. His hands got really cold, and he began whining about this about halfway through. He was a good sport though and kept up with us right until the very end, when he decided he had enough and headed to the first aid station about 15 minutes before us.
Our team won this year! We had a really good strategy for communications and technology. We also had this really awesome group of cachers that totally kicked ass and scored 35 caches each, and there were 7 people in their group. The winning region is determined by the team that has the highest average score per player. The bottom 20% of scores are tossed out, and individuals can earn bonuses by being the first to find a cache, and also the team earns bonuses for finding their “evil hides” – really hard cache hides that take an eagle eye to spot.
Here is our winning team (SouthEast Texas region) before the event started. Our team colors are pink.

The trails in this park are really nice. It seems small on the map, but when you are on foot, it seems to go on forever. Some portion of the trails are paved, but then there are several smaller footpaths (or game trails?) that go off of them. The scenery was awesome…however, it was impossible to get pictures during the Challenge because we had to move so fast and there was no time for idleness. Afterwards, it rained so much and was so cold that we could not go back out to explore. Plus, there were activities for the event, and dinner.
My idea of using our campstove to prepare hamburgers, skillet potatoes, and beans was out of the question, so we headed into Pilot Point for dinner (and to sit somewhere dry and warm for a while). Who knew Pilot Point was Texas horse heaven? There are 25,000 horses and 300 ranches in that tiny town – 7 horses per person in that town! It was really a pretty drive around town.
The park hosts a lot of deer – whitetail I am fairly sure, although they could be mule deer. What do you think you see in that first picture? We saw some but saw evidence of a lot more. Coyotes could be heard singing at night and at sunrise. There were some very noisy ravens. I had to take this picture as it was the overriding nature theme of the weekend. 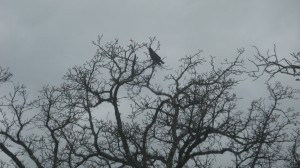 Both mornings, I was up before the sunrise, listening to the birds wake up and trying to distinquish which ones they were. This birding thing is really hard for me sometimes! I think I saw tufted titmice as the sun came up Sunday, and saw some cardinals. There were other birds but I did not identify them.
We had about an hour in the morning Sunday where it cleared up and we were able to get packed up. Then we were in this big rush to get home so we could unload and get dogs and all this. I really wanted to get pictures of wildflowers and saw some cool ones on the way up there, but we were in too much of a rush both times. We want to go back out for a leisurely drive Sunday and see them, hopefully in nice weather this time.
Here is my parting shots – the best nature shot I got all weekend, and me with the “trophy” of the weekend – the infamous “Golden Ammo Can” – and our team captain. 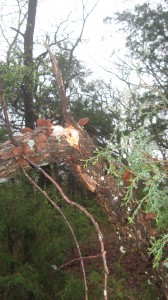 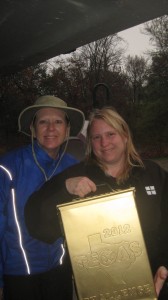