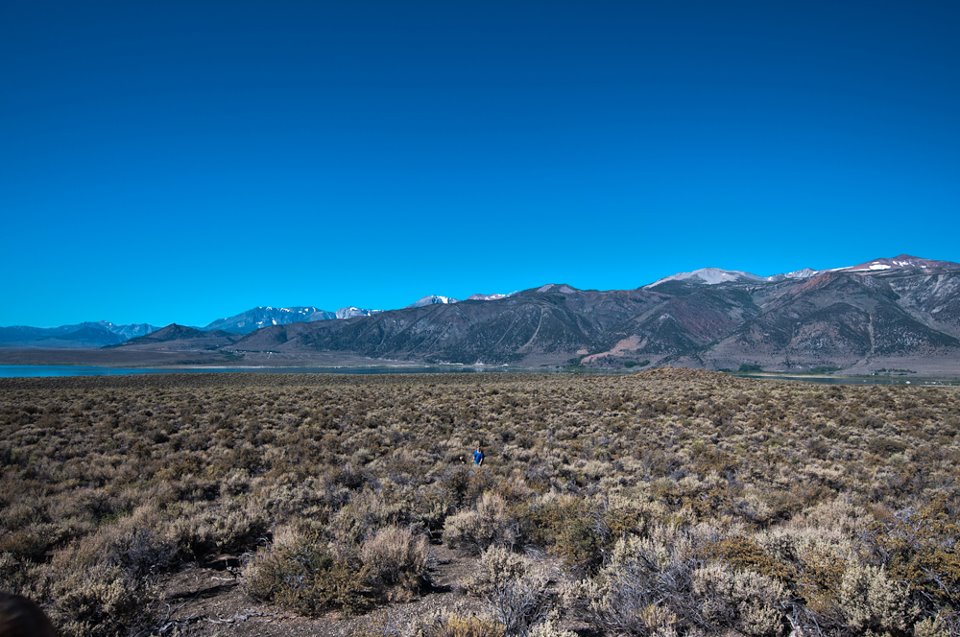 A Claustrophobic’s Nightmare/Just Say NO to Crack
Black Point, Lee Vining CA
This was the scene of our next adventure. One of our friends placed this cache back in 2004, and we had heard a lot about it since. We had to give it a try, so we drove our rental vehicle as far as we could along the dirt road out near the Mono Lake County Park. At some point the road becomes impassable for 2WD vehicles, and we had to stop to park and then hike the rest of the way out to the lava fissures.  It was a longer, warmer walk than expected – you can see me and the youngest in this picture above, from Jason’s vantage point ahead of us on the trail. 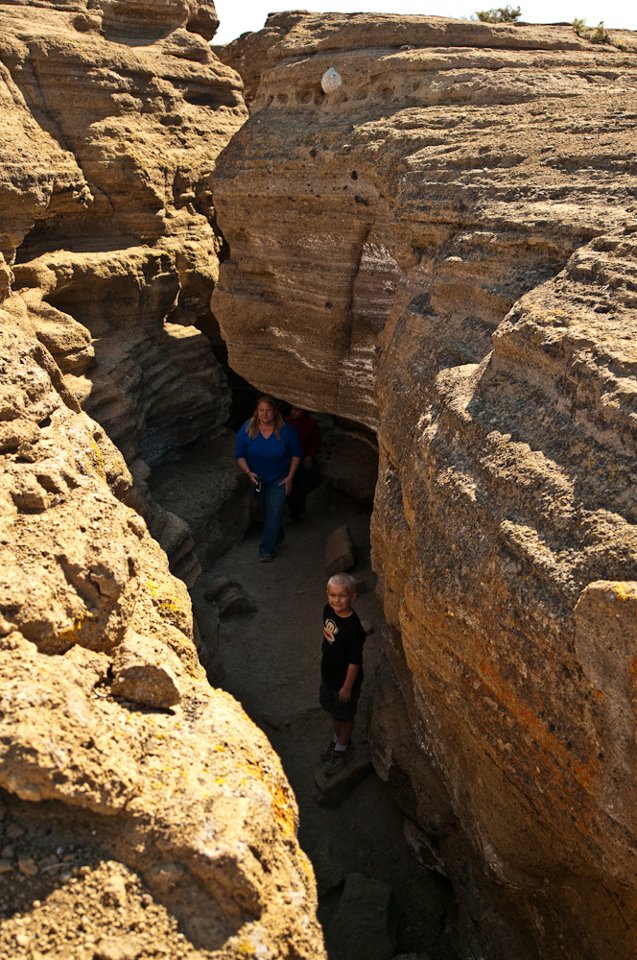 These fissures exist because of the tremors of an underground volcano 13,000 years ago. The volcano in the area is still active, and every 250-700 years the geology shifts a little as a result.  The last time there were such shifts was around 1980.

You can walk among the cracks in the wall, as you see above, and in this case, there is a small geocache hidden within the crevices.

It took teamwork to find this little bugger; Jason spied from above as I tried to both make sure the kids were being safe (ha!  impossible!  they were trying to jump around like goats and see if they could scale the walls) and look for the cache.  Jason’s sharp eye spied the cache before I did – a small lockbox – and threw a small pebble to the area to let me know where to look.  I had actually already looked there!  But I didn’t reach in deep enough.  We also looked for the answer to the questions for the nearby earthcache.

The walk back to the car seemed more arduous due to the heat, even though it was only the beginning of July and mid-morning; probably was not even that hot but we felt closer to the sun here in the high desert.  We drank a bottle of water each, and I remember being annoyed at the youngest for wasting a fifth bottle – he had either dropped the bottle, lost it, or poured out what was left because he wasn’t thirsty anymore.

After returning to the car, we drove back out on the rough dirt road we came in on, and then decided to find some more caches in and around Lee Vining.  We had eaten breakfast before our hike at the only restaurant open in town – Nicely’s – which was a bit of a misnomer because the service was almost as bad as the food there.  It was pretty terrible.  We should have drank more water there, though, or brought more with us, because we felt pretty dehydrated and only searched for two caches (also hidden by our friend Snoogans) before stopping back at the Whoa Nellie Deli to gas up the vehicle, and sit in the AC with drinks and snacks to recharge before we headed back out on the open road.