You haven’t heard much from me on here lately.  It’s not because I haven’t been thinking about you.   It’s just that we haven’t had many nature experiences lately.  First it was the storms and flood that kept us in, and then it was the heat and the bugs.  It has turned into that time of year when those of us in Houston turn to the refuge of TVs and ACs and avoid the outdoors.

However, you know me, I’m not going to stay in for long, and my desire for adventure is going to led me out of the house.  So my goal, then, is to find ways to have adventure that also keep my kids cool when we are doing it.  These are the ways we have found to do that lately this summer:

Splash pads: we have visited three splash pads so far this summer, but I plan to take the kids to more.  One splash pad that we went to with a Hike It Baby group is a public one I would recommend to anyone, with words of advice.  It is located in Nottingham Park at 14205 Kimberley Ln, Houston, TX 77079.  This park can get busy, so be prepared for that.  There might be times that are better than others to go.  The girl who hosted the Hike It Baby there said it was not busy on a Tuesday morning when she went, but on the Friday morning we were there, there seemed to be 2-3 field trip buses that showed up.  Still, the kids had fun.  There is a playground attached to it, and I think next time I will let the kids play their hearts out FIRST, and then cool down in the splashpad.  The time we went, they did that backwards, and slides don’t work as well in wet bathing suits, plus we ended up having to go back to the splash pad to wash off and cool down after. 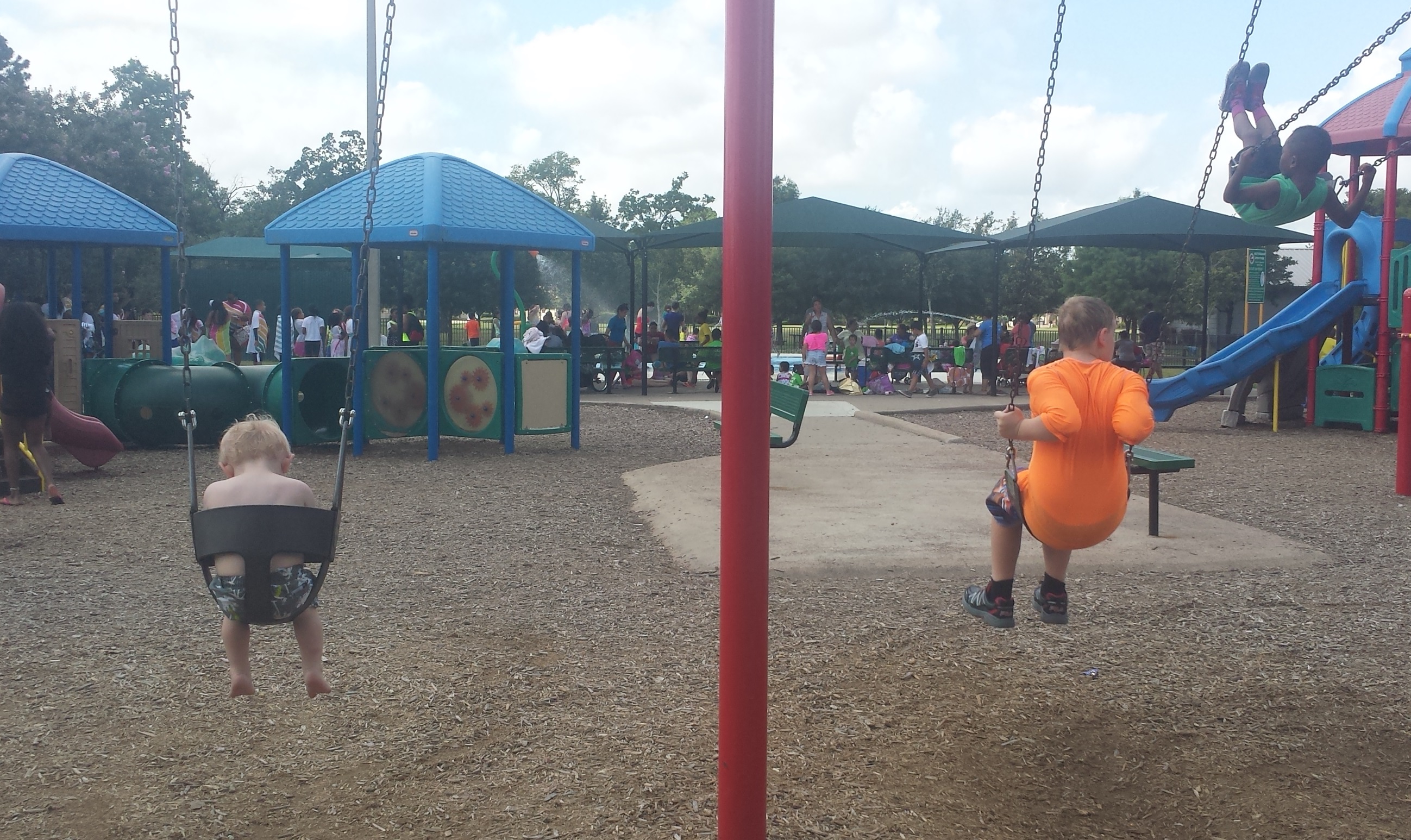 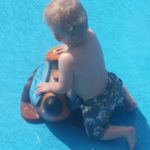 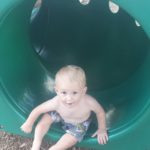 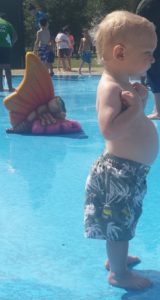 We also went to some neighborhood splash pads (Grand Lakes, Pine Mill Ranch), but apparently the residents get really worked up about non-residents sharing these, especially in Grand Lakes.  The people in Pine Mill Ranch didn’t seem to care either way, and their splash pad is really nice, so perhaps we will just keep going there.  Some that we have planned to go to still this summer:  McClendon Park, Cullen Park, Discovery Green, Wiley Park, perhaps the Aquarium and Zoo ones.

Pools: we have been frequenting the outdoor pool at our local YMCA.  It is a great pool for babies and young ones, but of course, only open to members.  The good news is that YMCA memberships are city-wide, so if you are a member of one Y, you could use the pool at any Y in the greater Houston area.  There is also an indoor pool that we sometimes use there.

We also have a pool in our backyard, but I have only taken the kids to swim in there once because I kind of don’t want Sebastian to even know about it.  He loves swimming and he is entirely too brave and independent for his own good.  We are trying to make sure he learns how to swim safely and early.  He took classes at the YMCA and now he is taking classes once a week at Pengu Swim School, but he is still a toddler who doesn’t know how to hold his breath yet.

An awesome pool for little ones that we recently swam at was at the Best Western Plus hotel in Austin, off 35 at the Oltorf exit.  That is a great hotel, so if anyone is going to Austin, I could not recommend it enough.  Their pool had a baby pool that was one foot deep, and separated from the main pool by a ledge that could easily be passed over by a parent to take the kids from one side to the other.  We went back and forth a lot when we stayed there last weekend.

Some other pools that we plan to visit this summer include the Noah’s Ark pool at the Quillian Center in the Westchase area, the Bellaire Town pool, Rob Fleming in the Woodlands, and probably Grandma’s pool.

Children’s Museum Flow Works: we had a free pass to the Children’s Museum and Sebastian had a great time playing with the pipes and PVC elbows in the flow works area, and there is enough splash off that his shirt was quite wet and he stayed cool while playing there.

Beach: we took the kids to Galveston once this summer, maybe we will go again.  Sebastian LOVED it and was quite brave about the waves.  Kaleb always loves the beach, that is his happy place, and in fact that is why we went: to celebrate his birthday. 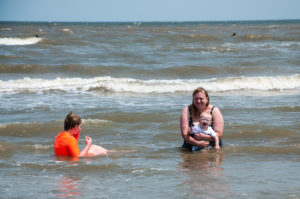 Other ideas I have on how to stay cool while having adventures with the children this summer include visiting the Galleria, downtown tunnels, museums, and the gem show again.

I have been doing a bit of geocaching alone on my bike (to give me some exercise but not expose the kids to too much heat).  We have a bike trailer but it does seem to get Sebastian hot quickly, so we are not using it when the sun is shining down.  Maybe we will go on evening bike rides, and perhaps now that Jason has a different schedule he can take morning bike rides towing Sebastian.  Jason is going to be a stay at home/work from home dad for a bit now, and there are some places he will most likely be taking the kids to have some fun indoors this summer.

I want to share the adventures we all have, and hope that we can resume hiking and forest explorations in September.