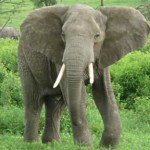 On December 29, 2004, elephants in Sri Lanka giving rides to tourists began trumpeting and acting agitated.  Chains were broken, and the beasts ran for the hills.  They weren’t the only ones acting peculiar that day.  In nearby Yala National Park, monkeys and birds had been acting odd all day, turning their noses up at bananas offered to them. Three elephants were seen fleeing uphill.  Flamingos fled breeding grounds in Thailand, and in India a lighthouse looker observed a herd of antelope stampeding for the slopes.  Most of the animals began a mass exodus to points north, seemingly fleeing from something nobody really understand.

Until about an hour later, when the Asian Tsumani hit, the worst tsumani in history.  The death toll in all the affected areas hangs around 187, 000 people.  However, in Sri Lanka, where these elephants hailed from, there were 0 reported animal deaths, compared with 30,000 human deaths.  No animal carcasses were found in Yala National Park, and all the tourist elephants and all the 250 wild elephants living in the park survived.

Some want to hail this as proof of a “sixth sense” of animals, or that the animals have some kind of deeper connection to the natural world.  Others want to disprove it somehow or call it urban legend.  I think it is possible that the elephants more sensitive hearing and ability to detect infrasound gave them a heads up that danger was coming, and their survival instinct led them to advance to higher ground. Or perhaps they were able to feel the vibrations of the approaching storm through their feet.  Many animals, including humans, are designed to feel vibrations in the earth (we are equipped with special receptors called “pacinian curpuscles” for just this purpose), but most of the time, humans tune this information out.

There are two facets that intrigue me about the behavior of the animals before the storm.  Scientists studying the elephants at Yala say their radio collared elephants were acting normally before and after the storm  (http://nationalzoo.si.edu/Publications/ScientificPublications/pdfs/41A3412A-04F5-48D1-86A7-8BF03813F28B.pdf) , and that their behavior was normal in response to environmental cues.  The scientists are trying to disprove the theory that the animals were acting in a way akin to a “sixth sense”, but yet a Google search about the elephants behavior lists all stories about this alleged sixth sense, and only one tag to the scientific paper about these radio collared elephant.  It makes me wonder about media and perception and what people would rather believe.

The other interesting aspect is how humans have processed this information.  Since the incident and these widespread stories, using animal behavior as an “early warning signal” of approaching weather disasters is being looked into by governments, research institutions, and other interested parties.  Expect to see more information in the future on animals being used as sensors predicting natural disasters in the future.

One thought on “Did Someone Say “Tsunami”?”