Last week at work, I saw an unusual bird hanging out in the mid-foliage range in our little mini-forest that borders one side of the property.  It was striking in appearance, and of course I wanted to solve the mystery of what it was, since birds have been on my brain lately.  Without a field manual, I was reduced to googling bird websites and images until I found a bird that looked like what I saw. 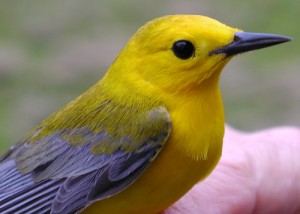 The image that matched the most was for a prothonotary warbler.  However, the websites I was reading about this bird on suggests that our area is not within the typical range for this one.  So I started to think I was chasing another “zebra” and investigating other similar looking warblers.

However, I did learn something interesting about this bird while I was snooping around online.  This little bird was central in a House of Un-American Activities trial as evidence of Alger Hiss being a spy.  Also, it helped a certain junior senator named Richard Nixon climb his way up the political ladder.

Apparently what needed to happen in the trial to help convict Alger Hiss was to link him to a man named Whittaker Chambers.  Nixon and his team were trying to prove a link between Hiss and the Communist Party.  Chambers had fingered Hiss as a spy for the Communist Party, but Hiss denied any involvement and any knowledge of Chambers.  Finally, after some days of back and forth involving cars and pseudonyms and whatnot, it was Hiss’s quick admission of his seeing the prothonotary warbler, and Chambers telling Nixon about the sighting the day before, that helped link them together.

After a second day review of birding websites, I found one that had an interactive map for different species with sightings colored in in various parts of the world.  For this species, there was a clear band of sightings going from Sugarland to Pasadena, of which my work is right in the middle, so I think after all, I too might have had an unusual sighting of this bird.

Maybe I shouldn’t run off and tell everyone about it, though.  After all, that evidence could be used against me in a court of law. 😉

One thought on “I Spy”