So, I have recounted how on this second full day of our western road trip, we did not manage to make it to the Gold Bluff Beach Campground before they were all full up.  After doing the Fern Canyon hike, we figured it would be best to find a place to lay our tents out for the night.

We ended up finding a place up the road in Klamath, California (not to be confused with Klamath Falls, Oregon, where the boys had their origin), in this sketchy Kamp Klamath campground.  Despite the shadiness of the checking in process, in which no information was collected from us, other than cash on the spot and a sudden surcharge at the end for pitching two tents instead of one, this was actually a nice place to camp.  And the guy’s advice on where to get a good burger late in the evening in this little town was spot on. 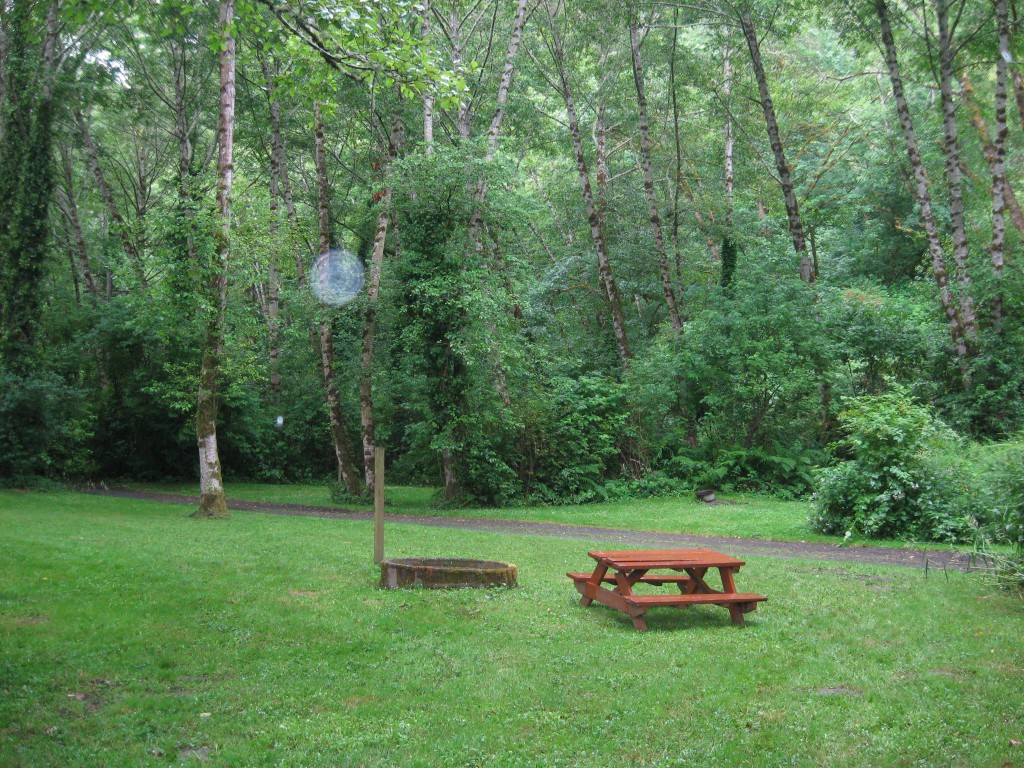 When we woke up in the morning, it was raining. The rain hardly let up all day long, taking some of our plans with it. We pulled up to the Trees of Mystery park, but no one felt like getting out and getting wet to enjoy it.
I went in the gift shop to answer a question for a virtual geocache there, and got tempted into buying some delicious fudge. Four different kinds – a peanut butter chocolate, an M&M candy flavor, a white one with caramel, and some other kind of white and brown swirly deliciousness.
After eating a hearty breakfast at the Forest Cafe nearby, the kids and I were all about eating some fudge, but it could only be eaten in small increments and outside the car. The children were a little reticent about disengaging from their video games and whatnot to go exploring the rainy wilderness in geocaching experiences along the way, so I began to use the fudge as a bribe to entice them to participate.
My oldest could only be fooled so long, and also was really into a book he was reading later in the day as we drove out of California and into Oregon. A particularly beautiful stretch of road around this time traced the edge of the Del Norte Redwood Forest, and I wished we had a chance to explore it up close but the rain was really coming down and even we adults didn’t feel like braving it. When we return to this part of this world someday, though, I hope for a sunny day.
So, towards midday, we were ahead of schedule as we approached a turn off for this Eight Dollar Road, which I had learned in my trip-researching had some great scenery and potential for wilderness exploration. Plus, the rain had let up a little. So J did not object to making the detour.
So we ended up on this little mountain road that followed along the Wild and Scenic Illinois River. This section of the Illinois is a protected tributary of the Rogue River, testing the skill of boaters in eight 4-4+ rapids in the fifty miles from Cave Junction to its intersection with the Rogue. We saw some campers and vans way down the road in this ledge area, it was all very interesting, but we soon turned around and parked on the way back to the main road at a trail head.
This hike I had planned out was not that far, less than a half mile round trip. The oldest boy did not want to go, but the younger one bounced up when I asked who wanted to get out of the car.
Now, this one had wet tennis shoes, because he did not want to listen to our guidance the night before to not jump in the flowing stream in the Fern Canyon. Show me a six year old boy who can resist jumping in puddles for a splash, and I might believe there is one out there who can withstand temptation.
So he had to make the hike in flip flops. 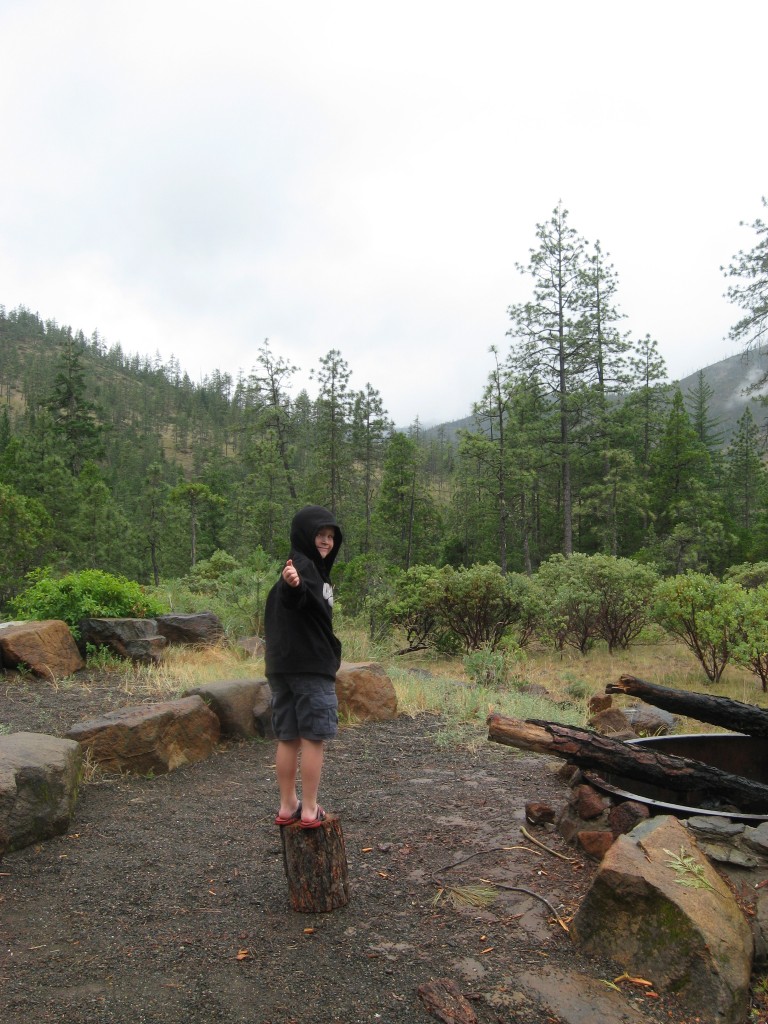 Now, it doesn’t look that muddy in this picture, but somehow by the time we made it back to the car, this little boy had mud streaks along his calves and feet, mud that we carefully cleaned away with baby wipes. The hike turned out to also be a little rougher than I anticipated. The trail started out okay, but then there was some climbing down a little embankment and little terrain changes that made me feel bad for him and his inferior footwear. He was a real trooper, though, and seemed to enjoy finding an ammo can and going through it for swag and making our way up and down the little rugged trail, in between bites of fudge that I was offered up like little rewards for his good attitude.
I was a little frustrated on the way back with the unexpected terrain, and with J’s disappearing trick he had done when we had gotten down there (he had wandered off to take pictures, but then found it amusing to be silent when I was calling for him trying to reunite, instead watching me searching for him and getting increasingly anxious). It took some help from me for the little guy to make it back to the car, because the going got a little slippery and difficult.
When we were almost there, little K, who is no longer having any fun, turns to me and confesses, “I didn’t really want to go on the hike. I only agreed to go because you said you would give me fudge.”
Aw! 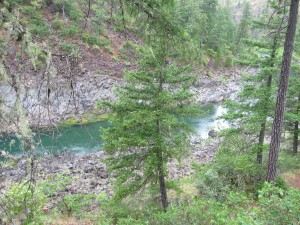 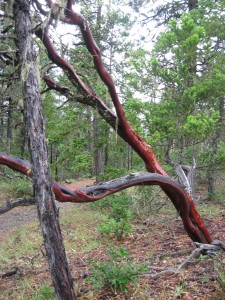 What kind of trees are these?

So, we get back on the road. It is drizzling now. A half hour later, J begins a conversation with me in which I am fairly sure we determined that we could wait until a few hours from now to eat. Another half hour, and he is pulling over in a McDonald’s parking lot and suddenly, we are eating.
The kid’s tennis shoes are still wet, so we have him put his flip flops back on. We finish ordering, and turn around to notice there is suspicious brown tracks that back right up to the Happy Meal display, where he was standing…brown tracks that follow him to his seat…and then we are realizing that we, in fact, are those jackasses that put the kid in dirty shoes, and that he is now tracking Oregon wilderness red clay throughout McDonald’s.
It was terrible, but what could we do but watch, as people came in and suddenly looked at the floor. You would think these people had never seen mud prints before. They were freaking out. We ate quickly and J hussled the kid out the door while the older boy and I picked up. There were quite a cast of characters assembled in this McDonald’s, and everyone seemed to be hyperfocused on trying to solve the riddle of what was left behind.
“What IS this!?” A WalMart-shopper type woman exclaimed, going to tell her companion, “there’s something gross on the floor! I am going to tell the employees they need to mop!”
“I am sure they are aware,” he says in return. J says later he was watching me from the truck, and was cracking up at the way I looked at the lady, and the expression on her face.
I felt like saying, “Calm down, woman.