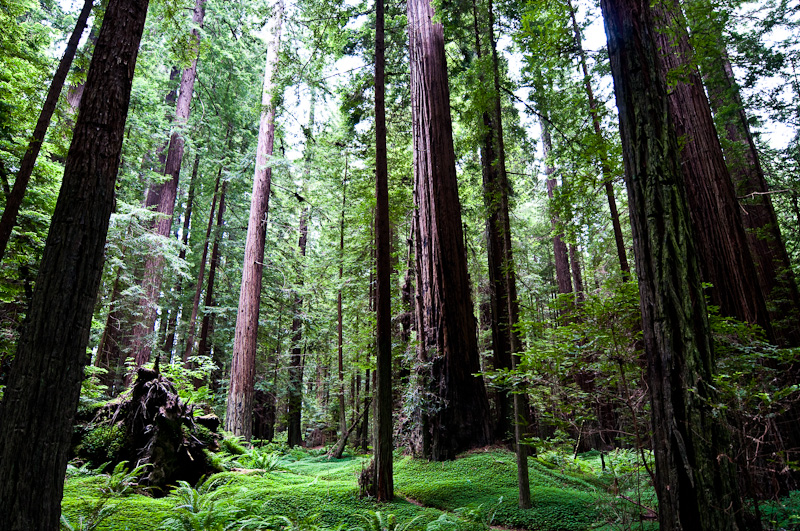 Albino Redwoods are so very rare that only fifty of them are known to be in existence. Six of those are located inside Humboldt Redwoods State Park.  Others have locations kept secret to keep foot traffic down near the trees.

I thought I was going to take everyone to see one.  I had the coordinates for a location for one, and all we had to do was park the car, and hike a little ways into the forest to get there.

Only, the hike got really annoying.  The kids had a lot of energy, being cooped up in a car the past two days, and they wanted to play this game that involving hiding from the photographer.  Their game involved shrieking every time they saw J behind us, and then running off ahead and looking for places to hide.  I was torn between trying to catch up to them, so I would not lose them, and staying close to J so he knew where we were.  Of course, the shrieking was kind of giving away our location, but also was ruining the sanctity of the hike.  I kept trying to explain this to the kids but they were like…on a mission to be bratty and not listening to me.

We finally got to the alleged coordinates.  J found us a few minutes later, but he was completely annoyed with all of us because he felt like we were ruining his enjoyment of the forest.  Also, there were several twists and turns to the trail and he felt like he did not know where we were going, except that he could follow the sounds the kids were making.  He did find us, so it worked, I guess.

Once again, though, I failed to understand something about the GPS.  Plus I was distracted by the actual finding of a geocache, and not a tree.  I asked the others to find the tree, and they kept asking me, is this the tree we are looking for?  Is this one it?

We didn’t see anything that was exactly standing out to us as an albino tree.  Later, I realized that the GPS had two sets of coordinates in it – one I didn’t know about, a “child waypoint” – that had the tree marked at 200 ft away.  SO we could’t see it from where we were.  And, because I did not research this ahead of time, I am not sure I would even have recognized it if  I saw it, because an albino redwood does not even look like a tree to me.

The hike was really nice, though.  This was actually one of the most beautiful places I think we found on our journey – a rare treet even if we did not get to see the rarer one.  So it’s a good thing that we did not miss this forest for a tree. 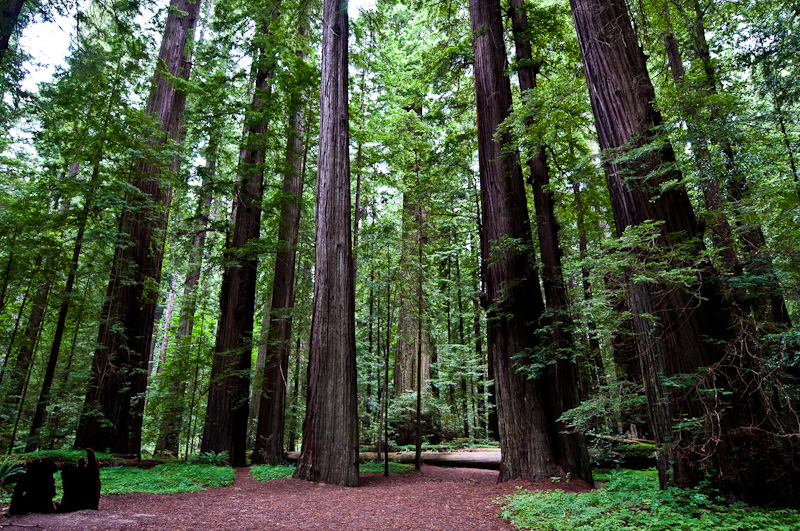 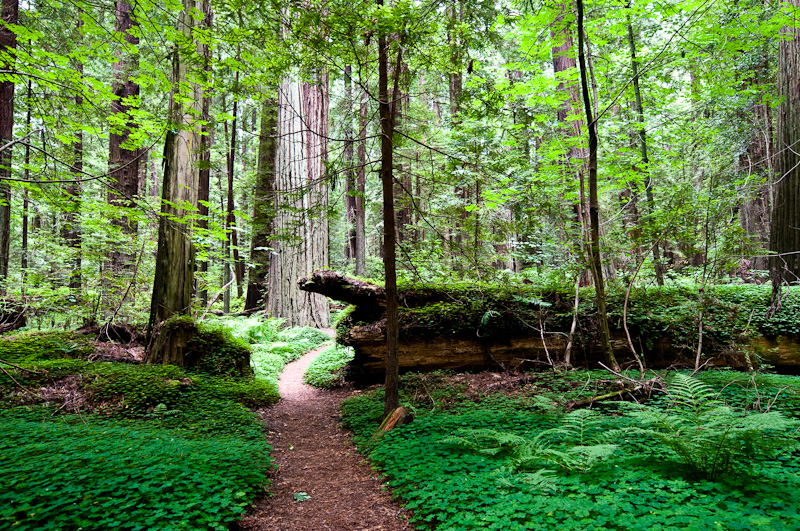 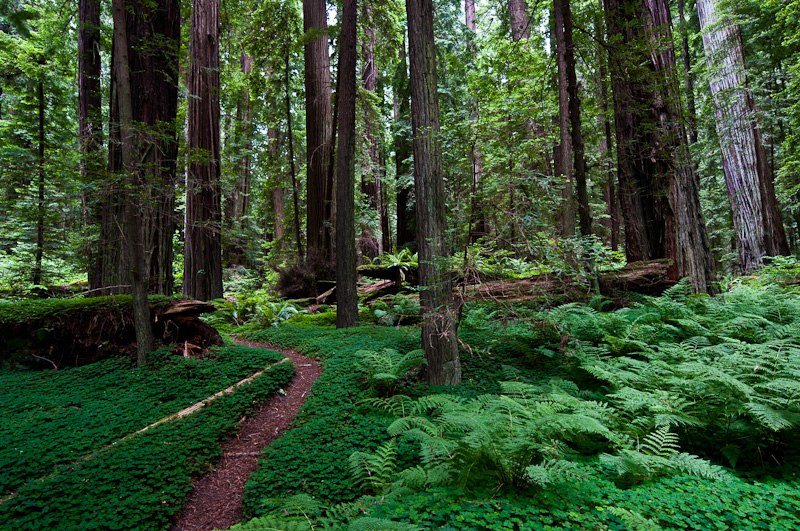 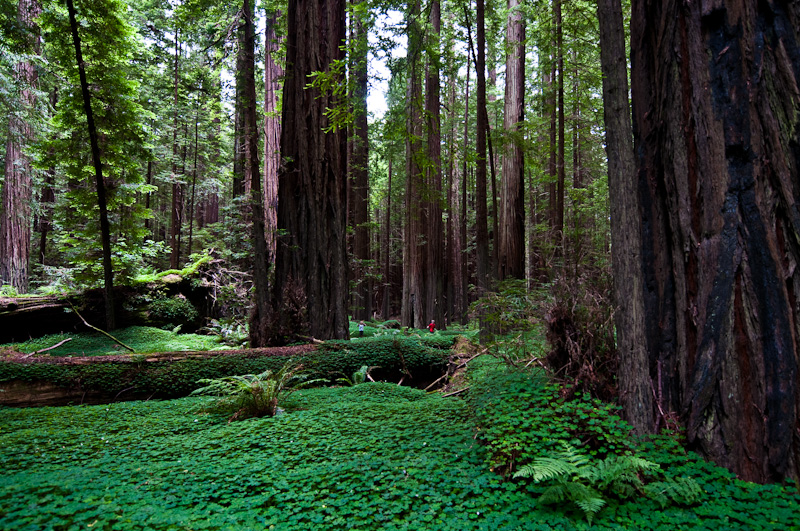 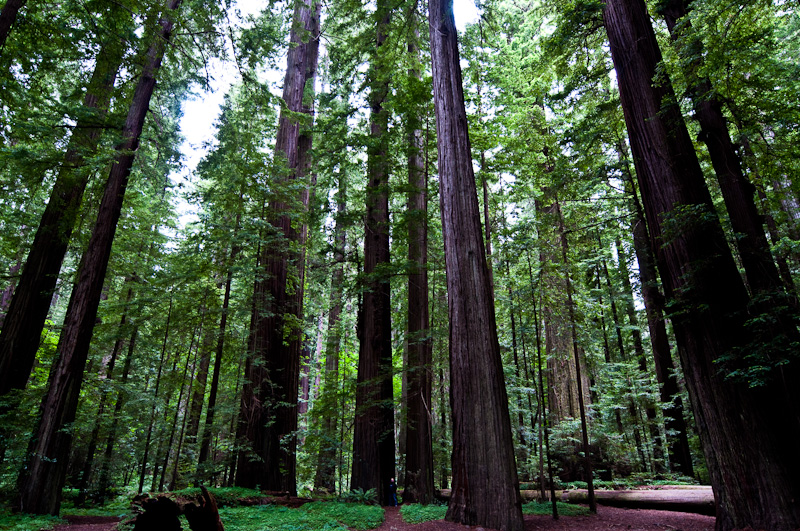 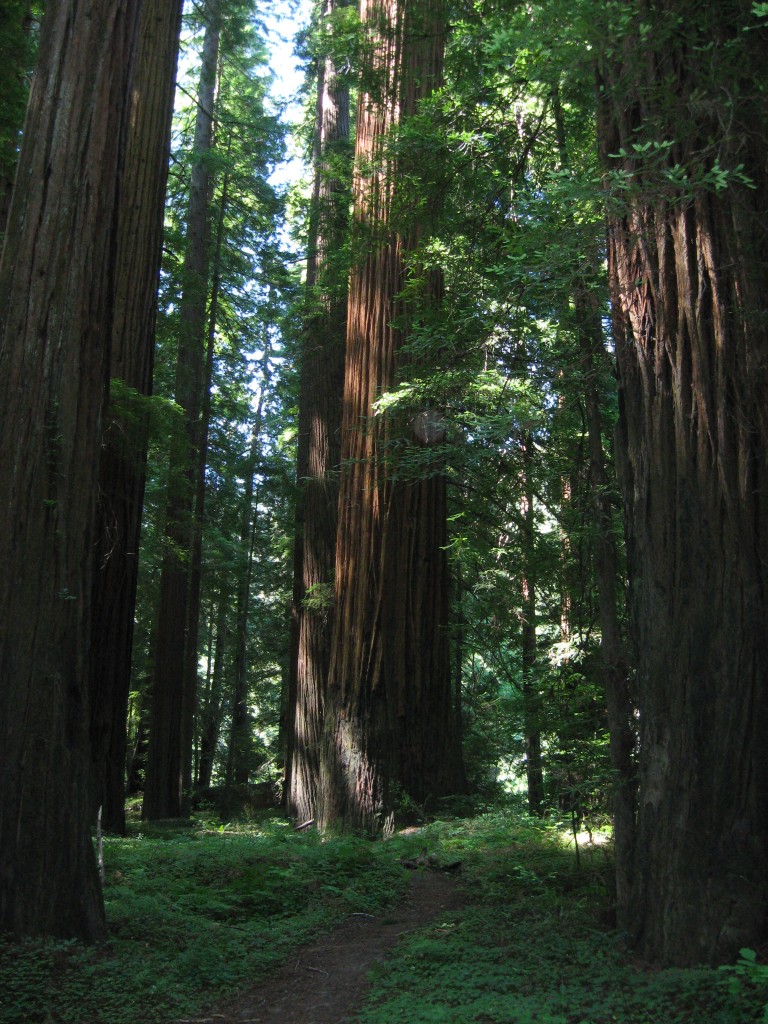 The first thing that happened had to do with last night.  Not this current last night, but the last night before this day, this day of odd surprises.  I had made reservations before our trip for last night in the Humboldt Redwoods State Park. I had struggled over which of the two main campgrounds to reserve in, until I saw one that was rumored to be more beautiful, but sort of off the beaten path and maybe a little difficult to get there.  We thought that would mean less people, more privacy.  I envisioned it as being in the main park, just kind of…further back and off to the side from the two big campgrounds.  I hadn’t, actually, looked it up on the map.  So it is a good thing that we hadn’t really tried to make it there in the dark the night before.

So here we are, trolling along in the Avenue of the Giants, taking pictures of huge trees and finding geocaches, when we stopped near a sign at a pullout.  The GPS was telling me I was 150 ft away from a cache, but it looked to be straight up along a hill, into the forest.  Usually in caching, if there seems to be a hard way there, there is probably an easier way there that you are missing, so you should look for it – this is what we have learned in the years we’ve been playing.  Probably also in those years, we should have learned to use our GPS properly – like make sure it has settled when you stop, and also make sure it is set back to “find off road” when you have been using it in the on-road navigation function.  So it seemed like the easiest way to approach this was to go up a short ways to the turnout for a campground, and then park in there and go down the hill to find it.

We pulled in and realized there was a day use fee.  As we were asking the ranger about the possibility of accessing the area for free just to see if this was the closest route to the geocache, and her telling us that she was pretty sure there was no geocaching at this particular park, I finally noticed the name of the park on the side of her guard shack.

Hidden Springs Campground.  THIS was the one we had the reservations for.  This one, I never would have found the night before, because I thought we were headed somewhere off 101, not 254 – the Avenue.  Well, once I explained to her that we paid for camping the night before and had not used it, she recognized our name and told us what campsite we were going to be in, and gave us our little day fee pass for the window, saying we should at least get our money’s worth. 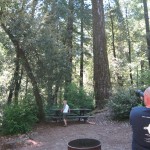 To see the sign that read, “Hidden Springs Campground”. 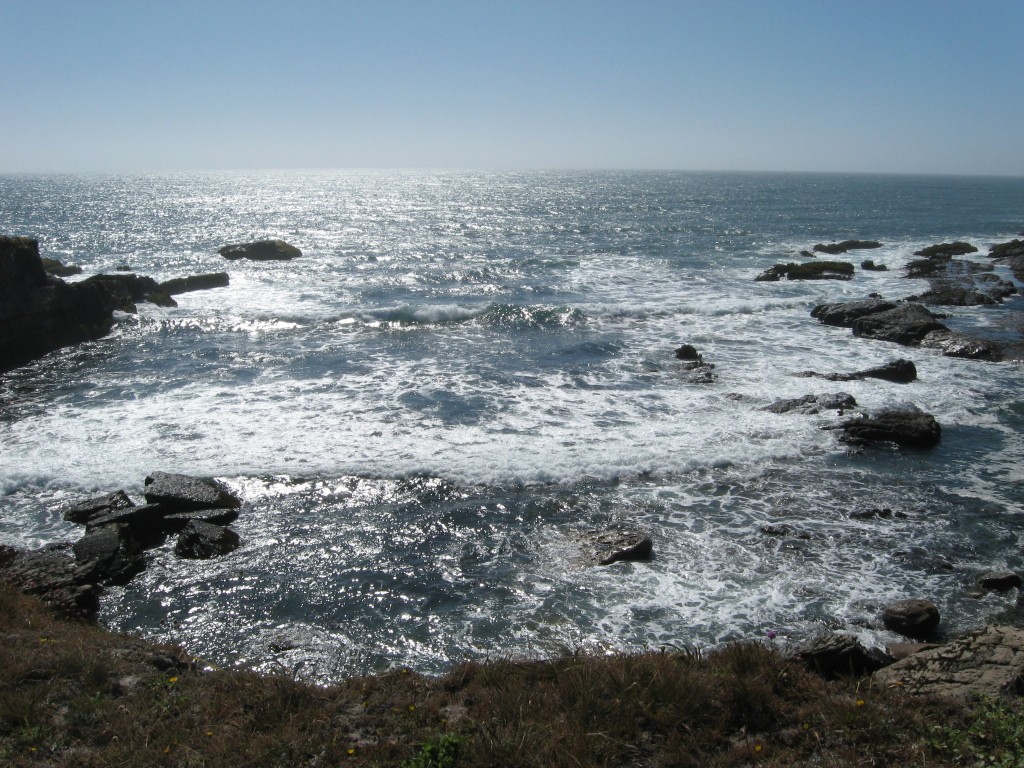 After traveling the long and winding Highway 1 off the California Coast, stopping only to eat deli sandwiches in a little overpriced convenience store deluxe in Olema, we realized we were not going to make it all the way to our campsite.  We were going to have to find a place to stop, soon, so we could minister to the various ailments of the Harding boys.    We were lucky to find a great place to stop for the night, in the unexpected form of the Redwoods River Resort.

The place was affordable, sold food on site, and, most importantly, had a room available. We were sold…and hungry. The food was substandard microwavable fare, and the room and beds maybe a little rough around the edges, but it was decent enough and surrounded by so much beauty.
In the morning, we headed back out to begin our explorations of the Redwoods. We backtracked just a few miles to head to a secret waterfall tucked back along a mysterious overgrown trail along Highway 101.  At first I sent J to do recon, and he didn’t believe there was actually a trail there.  I stubbornly insisted there was, and compelled our little group to wander down it.  The little one fell and scraped a knee along the way, and we fought some spider webs, but in the end, it was all worth it. 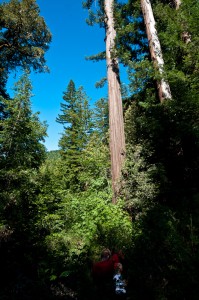 Then we began our northward journey, lurching towards our Zion in a rented GMC Terrain stuffed to the hilt with suitcases and borrowed camping gear.  The Zion in this case was the Gold Bluff Beach campground, located in Prairie Creek Redwoods State Park.  Reservations not accepted, but if you get there around eleven am, you might have a good shot at getting a camping spot.  We were on the road by nine, so I felt confident initially we could make it the alleged one hour down the road in time to get there.

But first, we really must detour through the Avenue of the Giants.  Find a few caches.  Search for the elusive Albino Tree.  And have some ironic, fantastic, and annoying experiences along the way. 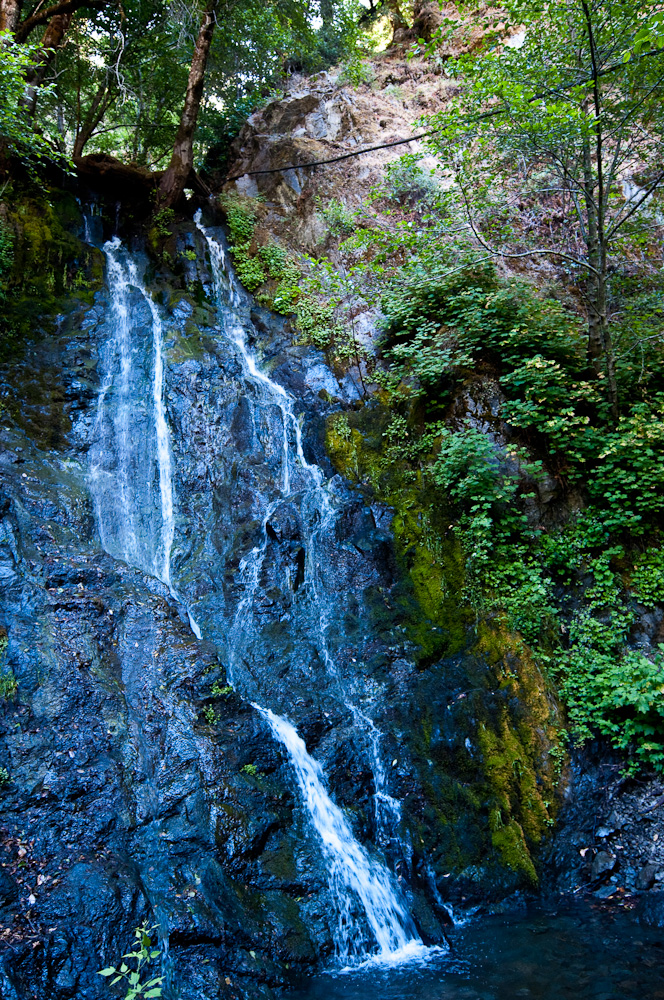 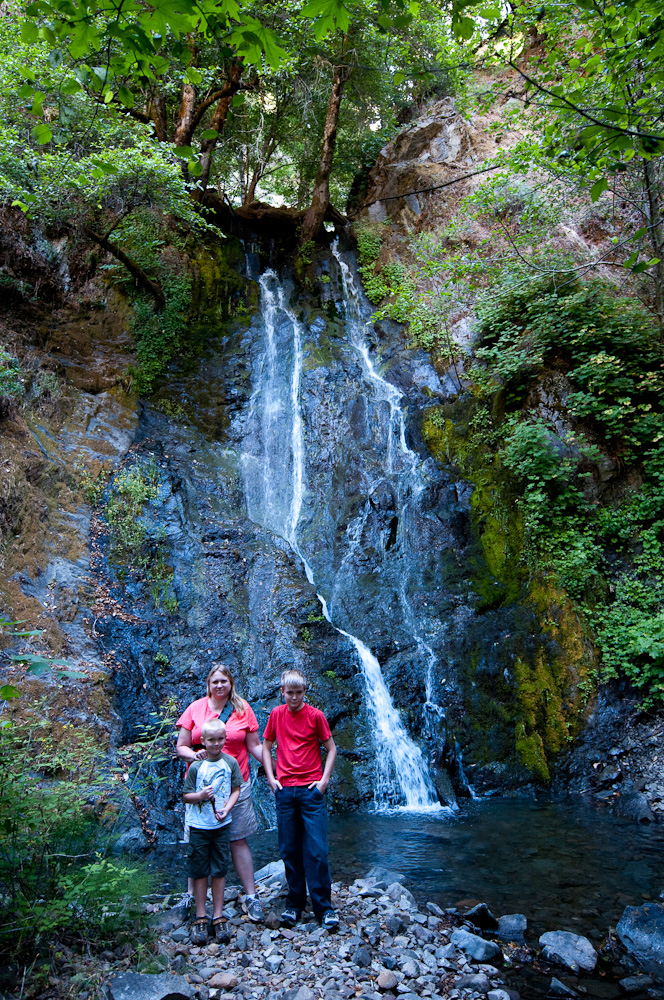