This past week, we’ve been getting out and stretching our tendons, strengthening muscles weary from winter rests.  It’s been a beautiful week, with mild temperatures and sunny skies.  Birds have been tweeting sweet temptations from the trees, and we desired to go see the things they spoke of – branches, berries, bits of brittle wheat grass and little insects hopping on a forest floor.

And so we ended up at Addick’s Reservoir. 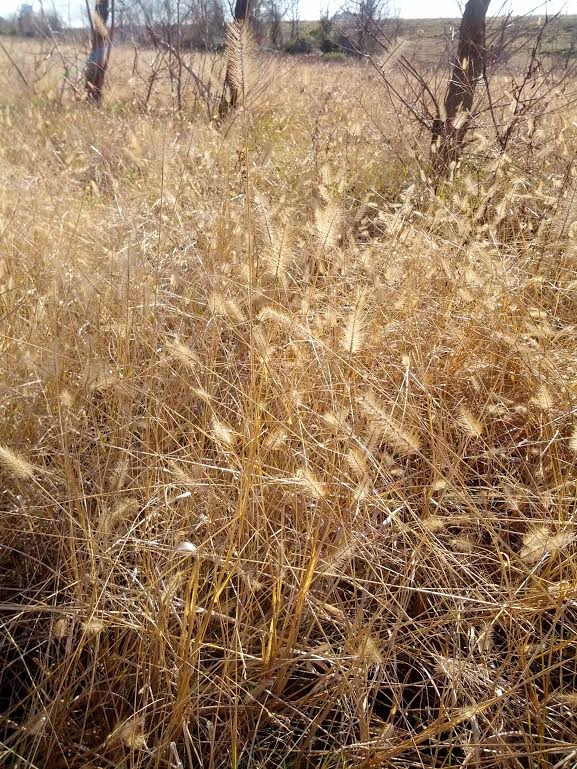 We were in search of the Elements – not just wind, water, earth and fire, although we did find the first three (and signs of a past fourth).  No, this time we were seeking Copper and Zinc, as in two of the natural earth elements that are featured on the cache pages of these two in the Elements series by Z Malloc.  These were two in a line that I could have gotten in a cache run on President’s Day some years ago, but couldn’t because they were past the water line.

Today we took a path that led down the side of the reservoir and towards the edge of the water line.  Then we turned east and walked towards a stand of bare, gnarled trees, one of which held the cache.  Yellow rumped warblers were too numerous to count, twittering in and out and all around the fields and trees.  A few American Robins were spotted here and there.  A hawk flew above us, either a red-tailed or a red-shouldered.  The vultures were ever present to the east, just above the water that grew from a trickle where we stood to a little gully several feet across in the distance.  If I was an artist, I would draw for you the sight I saw from my binoculars as I looked that way – the sight of three incongruous birds perched in a vertical line in the bare branches of the tallest tree; the lowest a blue heron with delicate neck in a s-shaped curve, the middle a white ibis with long curved bill, and the top unidentified, with the bill of an ibis but dark brown feathers.  I wished I could see that mystery bird better, but we were also in a mission to keep going, find what we were looking for, not fall down, and get home in a reasonable time frame.

As we made our way east, we heard one, then another crack of a rifle to the north.  We aren’t sure what was being hunted.  We did see signs that, at night probably, the wild things were doing hunting of their own.  I am fairly certain that in these collection of tracks below, besides the obvious raccoon, that a large cat was spending some time out here, perhaps bobcat.  Also, a few piles of coyote scat were seen, as well as damage to the side of the reservoir from feral hogs 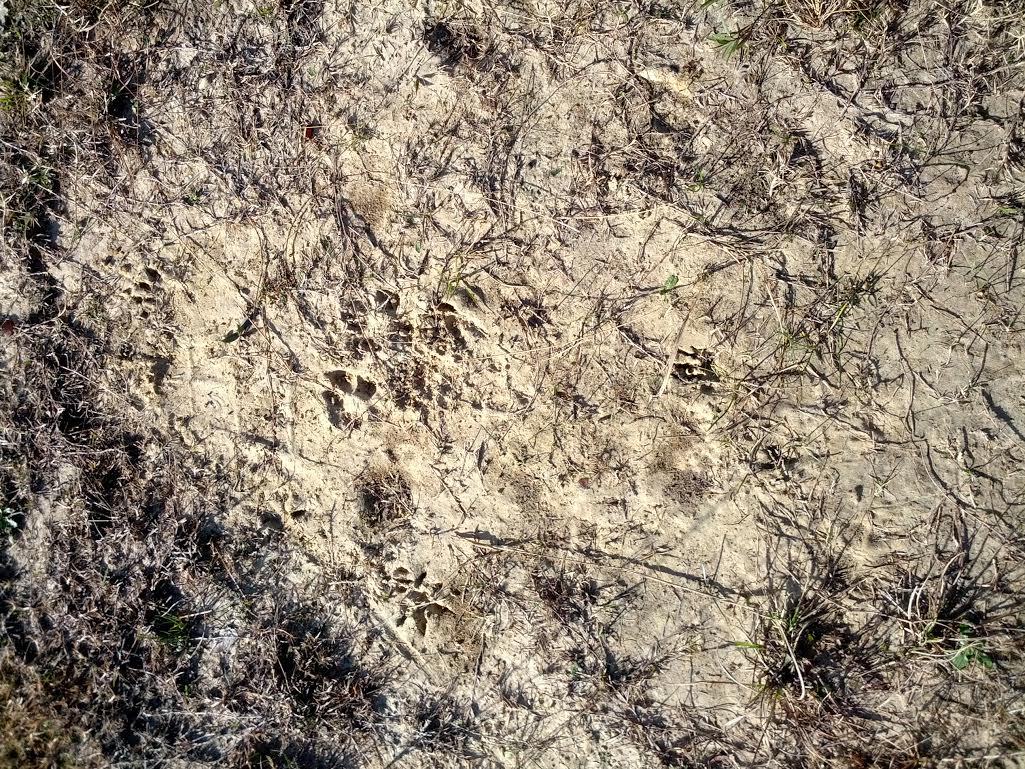 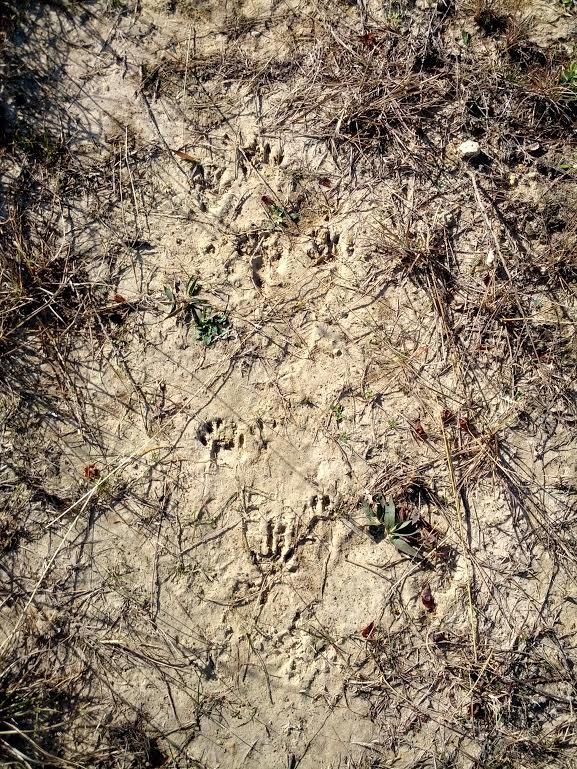 On the way home, we stopped to take a picture of a red-shouldered hawk perched all dejected-looking in a tree.  I will have to post those shots once J gets them off his camera (all shots in here are from my phone).  Also, I had him get a shot of a striking Northern Cardinal singing to the day at the top of a bare tree.

Later, we ended up in Cullinan Park on the south side of town.  We were with kids and parents, armed with sets of binoculars and a birding book to see what was going on at Pumpkin Lake.  We saw American Coots and Common Moorhen, with Great Egrets congregating at the back of the lake.  More yellow rumped warblers flitting in the bushes, along with what appeared to be Song and Savannah Sparrows.  There were probably a great many others, but identification is still difficult for me.  We walked along the trails and found a cache, and talked about others that used to be here (that I never found, only J) and what the trails used to be like.  Apparently this bridge used to go all the way across, but now stems the tide of trash down in the large creek: 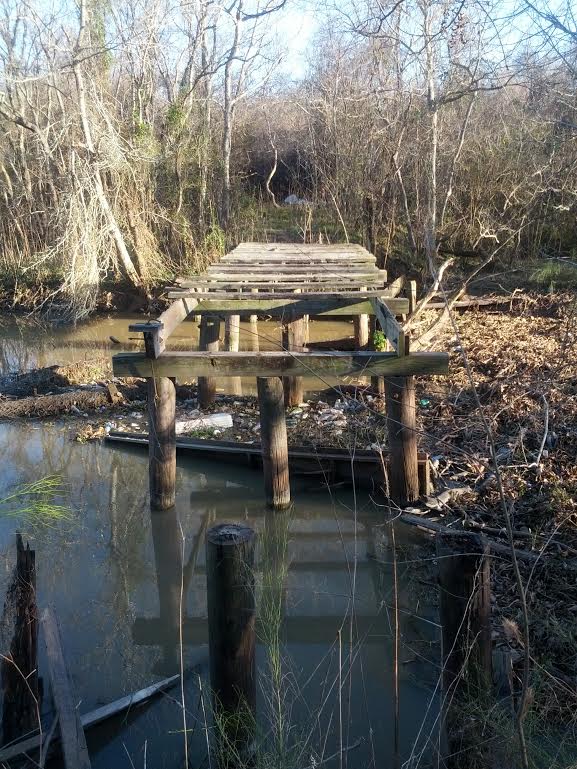 Also this week, I have been spending quite a bit of time along the Willow Fork Trail Bayou Extension (?) that runs under 99 and to the west along the bayou just south of Westheimer Parkway near my house.  I’ve been strengthening these muscles there, too, combining dog walking with geocaching and looking for birds.

One day, in the golden hour of light just before dusk begins, I had a rare moment where the multi-users of this trail had disappeared, and the birds felt comfortable enough to peek out and peep down the trail.  A Downy Woodpecker flew past the Song Sparrows that were cheeping along looking for insects.  Several Blue Jays were seen, one carrying what appeared to be a big muffin in his beak.  Several birds were heard fluttering around on the forest floor, none of which I was able to get a good lock on.

With these birds, plus the Great Horned Owl sighting of earlier this week, it brings the yearly total of seen species to 37.

One thought on “Things with Wings”