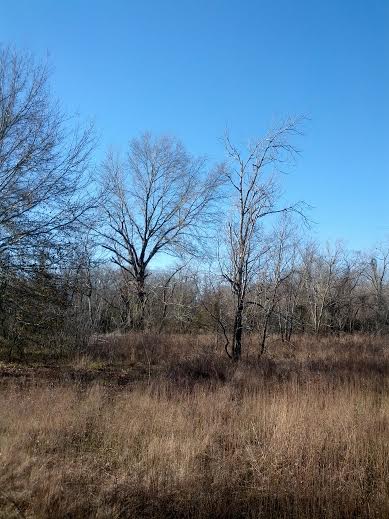 On a crisp winter morning, I met up with a friend from geocaching to head out to George Bush Park.  We were specifically after a series of caches off the Noble Road, an old farm road from the turn of the century that was later converted to a three mile stretch of trail.  This trail runs from Highway 6 to the hike and bike road leading to the Equestrian parking lot at the end of South Barker Cypress.  It was the latter parking area that we parked at around seven thirty this morning.

I carried a lightweight pack and binoculars, but I realized pretty quickly that I was going to have to choose between hiking and caching, and watching birds.  Last weekend J and I did a little of both, but we were only after two caches; today, my friend and I were trying to get 15-20 and we had a limited time frame, because I was headed to the Wildlife Center midday for a volunteer training.

The Wildlife Center’s motto is “A place to grow, a place to heal, a place to be wild”, and this is what I thought about this morning during our hike: not about the Center, but about this park.  This 7,800 park is reported to be home to about 10,000-15,000 feral hogs, signs of which were apparent to us this morning.  We saw several piles of what I believe to be scat from these guys, some quite fresh.  We had some discussion on whether it was actually their scat, because there was hair in some of the piles.   I was aware that pigs are omnivorous, but not sure if they actually consumed small mammals (I learned later that they will, on occasion).  There was also the tell tale evidence of the rooting for food that these creatures do.

There were also other sets of tracks along the path, telling the oldest story of all: the relationship between predator and prey.  I didn’t get a picture unfortunately, in the interest of expediency and regret it now.  I am fairly certain what I was seeing were the tracks of a raccoon, who was being tailed by a coyote.  I am not sure if both made it out alive.

Later, as we got past the curves and headed into the part of the trail that heads straight to Highway 6, we had our first and only encounter with actual wildlife.  A doe was grazing as we came around the curve, then lifted her head and watched us for a minute before darting off into the thicket to the right.  A few minutes later, an adolescent deer, most likely her fawn, came trotting out of the woods on the left.  It was confused for a bit, and I think even mistook us for its mom, because it began running towards us.  Then it stopped, and ran back, then towards us, back again, then from side to side along the path until it finally figured out how to also dart off into the right side of the thicket.  We hoped he got reunited with his mom. 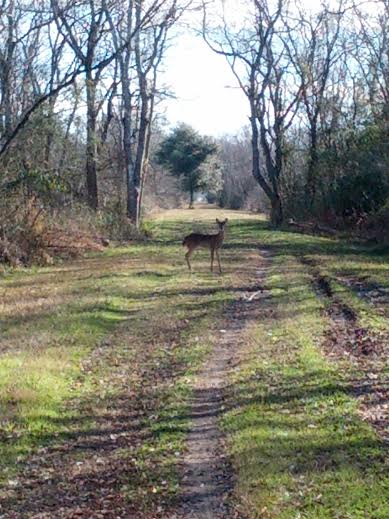 A place to grow and a place to be wild, that is what this park is; a sanctuary for wildlife in the middle of urban sprawl.  We heard the gunshots from the range all morning and wondered if the animals who live here just get desensitized to the sound.  Perhaps they never know what guns mean, seeing as that one recreational activity not allowed here is hunting; good news for the feral hogs, not so good news for the homeowners around the park that have yards torn up by these wild things.

Despite the lack of hunting, the deer still have a healthy fear of people.  I was a little concerned by the young one running up so close to us before he found his way out into the forest, but the mom was quick to bolt, reminding me of this line from an Indigo Girls song, “they’re coming for us/cameras or guns/we don’t know which/but we got to run”….we just wanted to take her picture, poor thing.

Even though George Bush Park sometimes gets cursed under our breaths for its thorns and rough forest patches, it is still a wonderful thing to have so much land available here where the wild things can live without restraint, and where we can go looking for them by hoof, foot or bike.