Sunday afternoon was drizzly and a bit cold, but here we were, in the truck headed south to Brazos Bend State Park anyway.  We were on a mission to retrieve J’s lost binoculars lens cover, and he agreed to indulge my desire to get a few caches and look for a few birds.

We settled on the Old and New Horseshoe Lake part, because that was a trail in which we could accomplish both missions.  Last time we were here, we were not near the water, so I wanted to see what the water birds were doing.

Old Horseshoe Lake is pretty much dried up right now, but there was a lot of action going on at New, as well as the larger Elm Lake to the left of the trail.  We meant to be moving right along, but got distracted by a hawk flying over and then parking himself on a branch across New Horseshoe.  We watched as a gator trailed an American Coot across the water.  It seemed like the gator was serious, but at one point he slowed down, and the coot stopped and moved back towards him, like, “whatcha doing now?”  It makes me wonder if the gators eat the coots or not, although it seems like it would be a good food source for them.  There were a LOT of coots in this lake.

There were also White Ibises feeding across the lake, as well as an egret here and there.  Common Moorhen also cruised the water.  Our new find of the day was a pair of Blue-winged Teals who moved in and around the coots, feeding at the edge of the lake.  We watched the hawk for a while, identified as a Red-shouldered, and then moved off to get those caches.

The caches were great – ammo cans just a bit off the trail, not too hard to get to or find but enough of a challenge to keep us interested.  The rangers or volunteers of some sort were driving around the trail on a golf cart, stopping now and then to pick things up, and it was the only thing that interfered with the song and sound of birds.  I could hear them, but I couldn’t always see them.  If I am going to take this bird thing serious, I really need to learn their songs and calls to be able to identify what is out there on hearing alone.

Our best bird find along the walk was finding a pair of Yellow-bellied Sapsuckers.  That was fun.  Later, we saw a red-bellied woodpecker.  We also saw and probably heard cardinals and the yellow rumped warbler.  We saw another hawk, or maybe the same hawk, calling and then perching on a dead tree out on the field to the right as we made our way back.  It was a red-shouldered as well, so might have been the same one.

As we passed the New Horseshoe Lake one last time, we found another bird in the lake that got us in a heated discussion trying to identify.  It was a goofy looking bird – big and tall, with mostly grey-ish feathers with black markings and a white head.  His feathers on his chest stuck out on all kinds of directions, and he looked like an old retired bird, long past the point of caring about what he looked like.  After much discussion, combing the bird book, and looking at pictures online, we finally decided he was a Great Blue Heron, although his blue was now a bit faded.

I think we have 87 active caches left in this park that we haven’t found yet, so I am sure we will be back to find them, and more birds, soon. 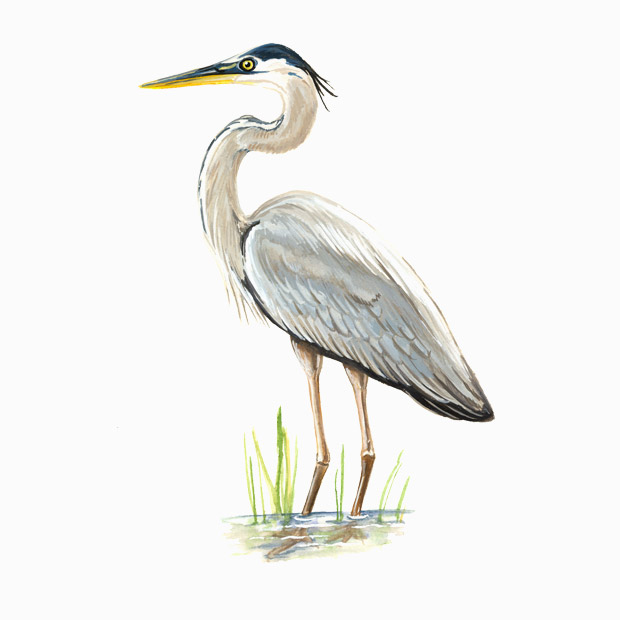