Details:  moderate hike, 5-7 miles round trip, takes average of 3-4 hours for most people to complete.  Park at the Calf Creek Campground and follow the signs.  $3 use fee required.

Highlight:  you can swim in the water when you get there.  It’s cold, though! 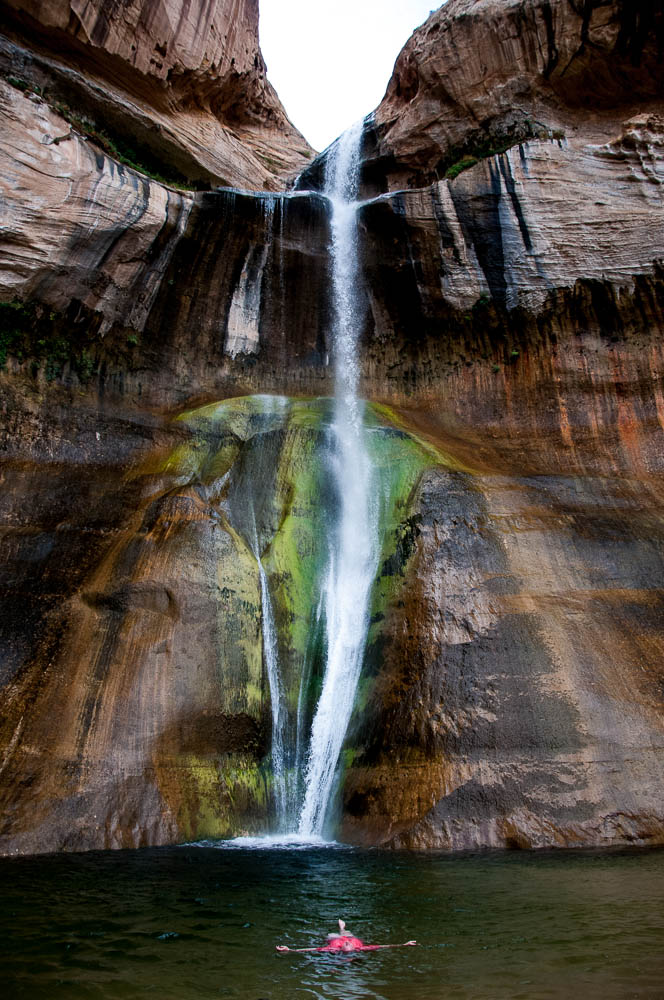 We got to the trail head for this hike around 4 in the afternoon in the middle of the summer, which is not when I would ideally recommend starting this hike.  It was hot, over a hundred degrees, and there is very little shade along the hike.

We also brought 16 oz of water per person, plus an extra 16 oz bottle, but we probably should have/would recommend bringing more.

The trail is sandy a good bit of the way, and on the way back, we probably all did at least the first mile without shoes.  Here are the boys feeling particularly chummy on the way back: 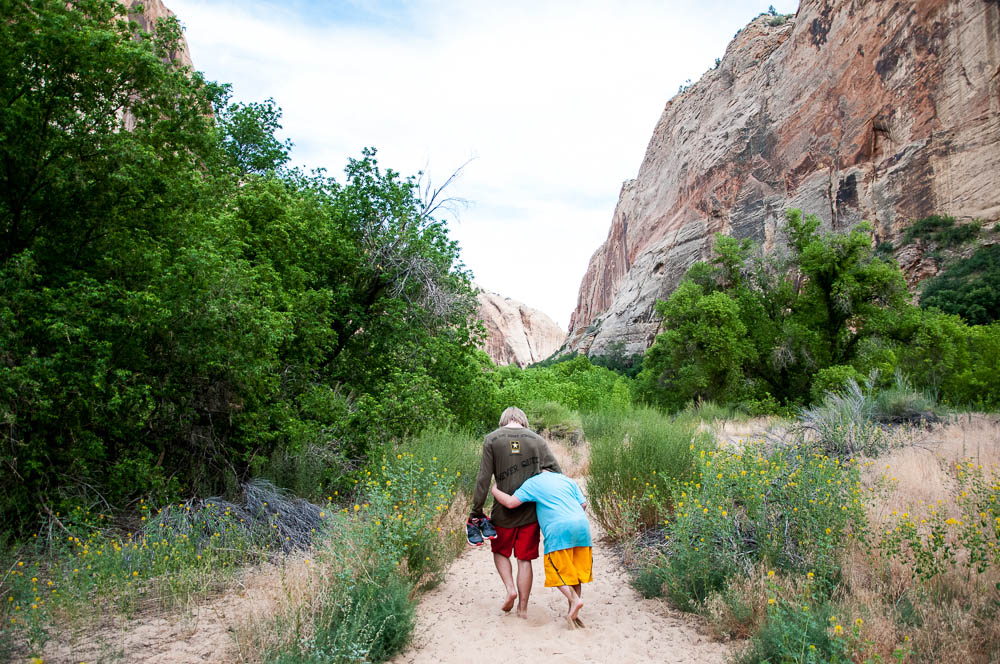 I was busy looking at birds on the way back.  I kept seeing a kind of bird I had never seen before, and it took me a little while to see it clearly enough to identify it as the Spotted Towhee.  We also saw White Throated Swifts flying up and down the canyons, Pinyon Jays, Mountain Bluebirds, and Townsend’s Solitaire. 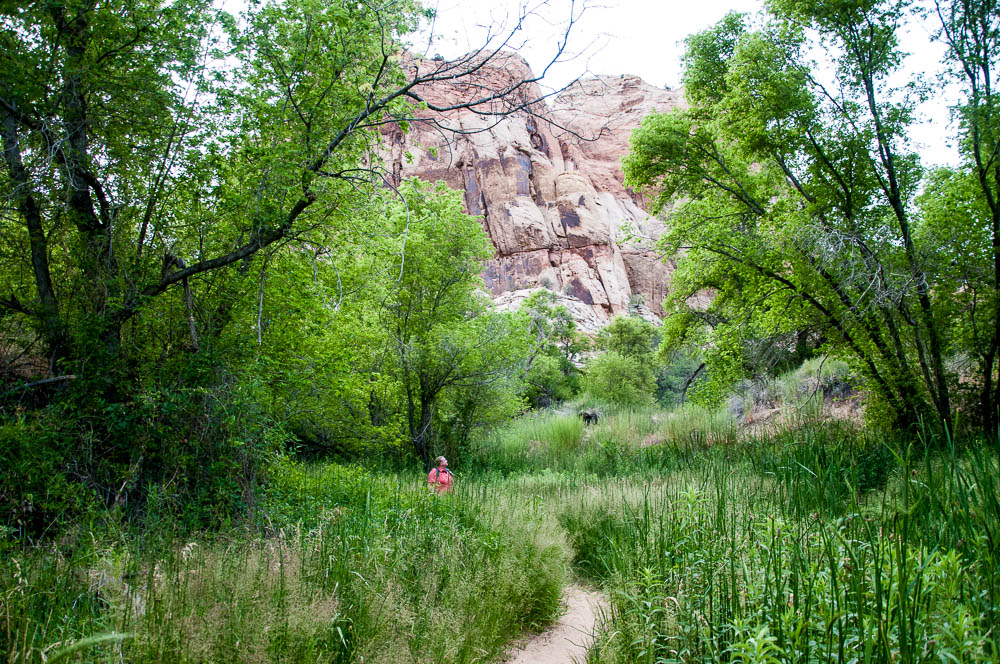 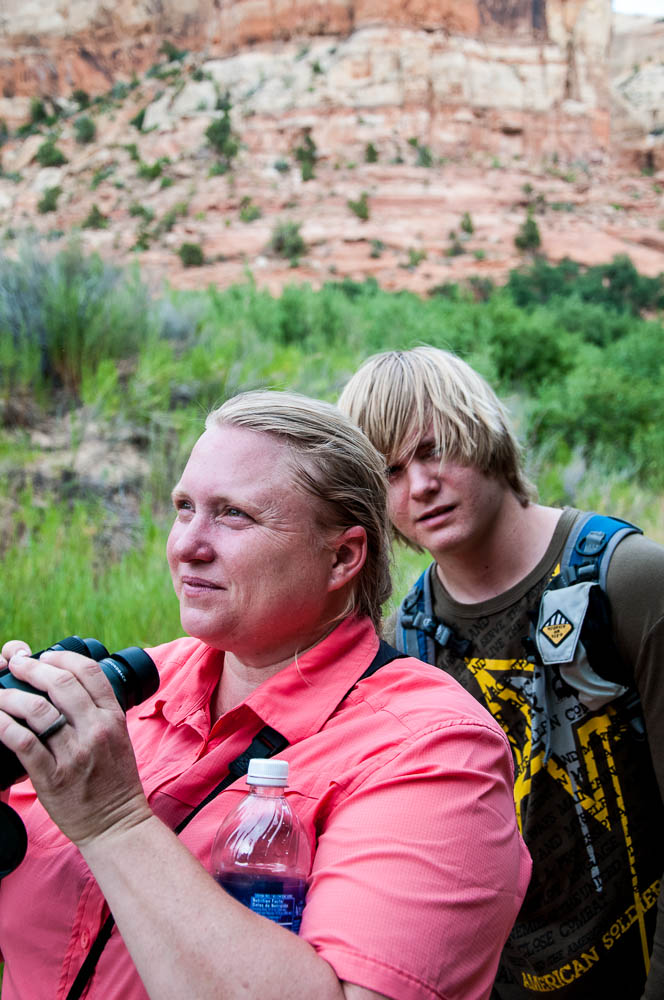 I have to admit that even though this hike was my idea, I wasn’t having that much fun doing it, especially towards the end.  I am pretty sure there was some cussing going on under my breath.  My broken leg of last year plus some ongoing issues with my tendons have kept me from hiking more than short distances in the past year or so.  We haven’t hiked over five miles since February.  I think it was March when I ended up having to go back to re-start physical therapy.  I had just been cleared to start trying more difficult terrain again, and some parts of this trail were a challenge:  the sand, and some rocky areas that involved having to climb up or down or hold your balance on one leg.  Plus, it was hot.  Also, the skorts I was wearing seemed like a good idea because of their quick-drying capacity, but after I had gotten them wet and sandy, they were quite uncomfortable on the way back.  Another thing slowing me down was the fact that I was at this point coming down with that nasty cold that my son and then Jason had.  Lastly, I was concerned about time.  No one else had as good of a sense as I did about how long it was going to take to get to our next destination, and I knew this was going to put us way behind schedule. 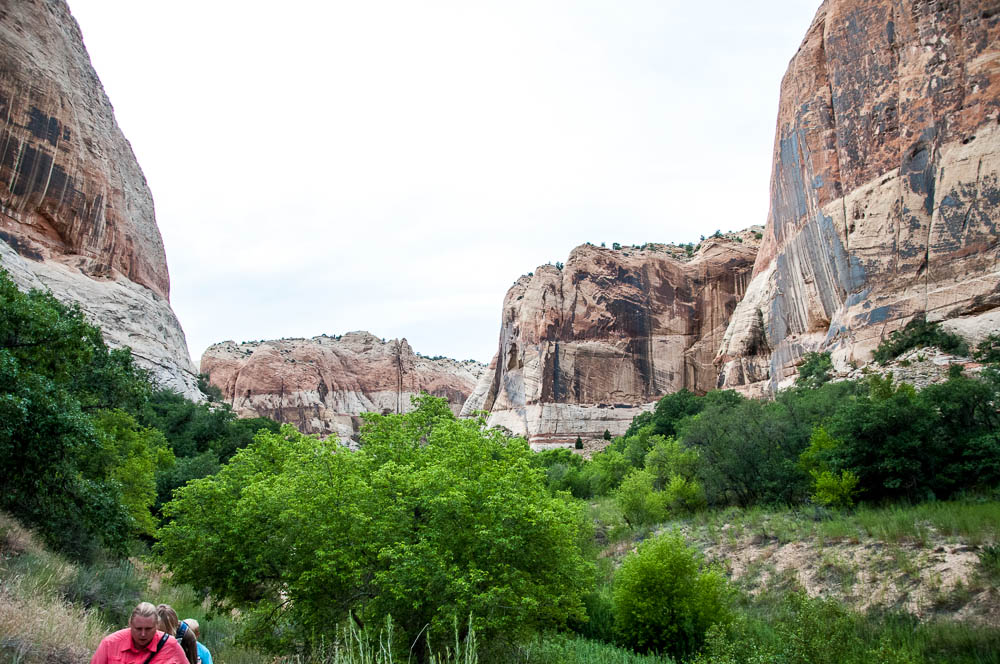 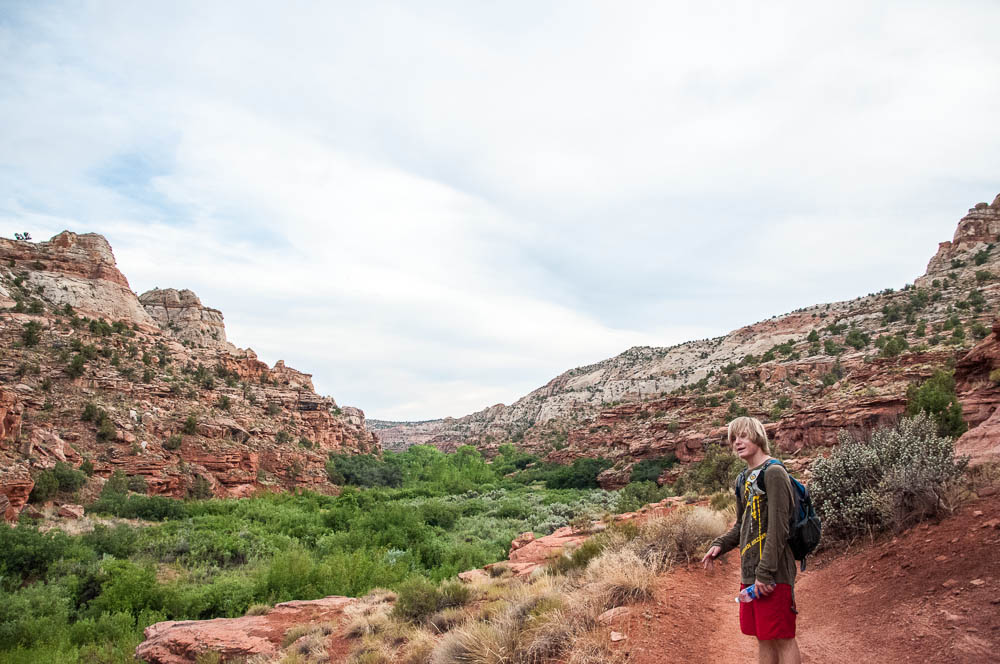 People watching experiences from the trail that we still talk about:  seeing two girls running to the falls on our way back.  We were about halfway back to the parking lot from the falls, and they were coming back as we were loading up, which means they did like four miles of a run in the time it took us to go a mile or two.  Plus they had time in there to take a dip in the water.  Even more impressive was their shoewear; they were wearing barely-there sandals made up of just a strip of leather covering their soles, fastened with two ropes across the top of their feet.  We talked to them as they loaded up, remarking at how impressed we were with their speed, and they shrugged it off, saying it was just due to them being acclimated.  That’s not acclimation, that’s incredible fitness! 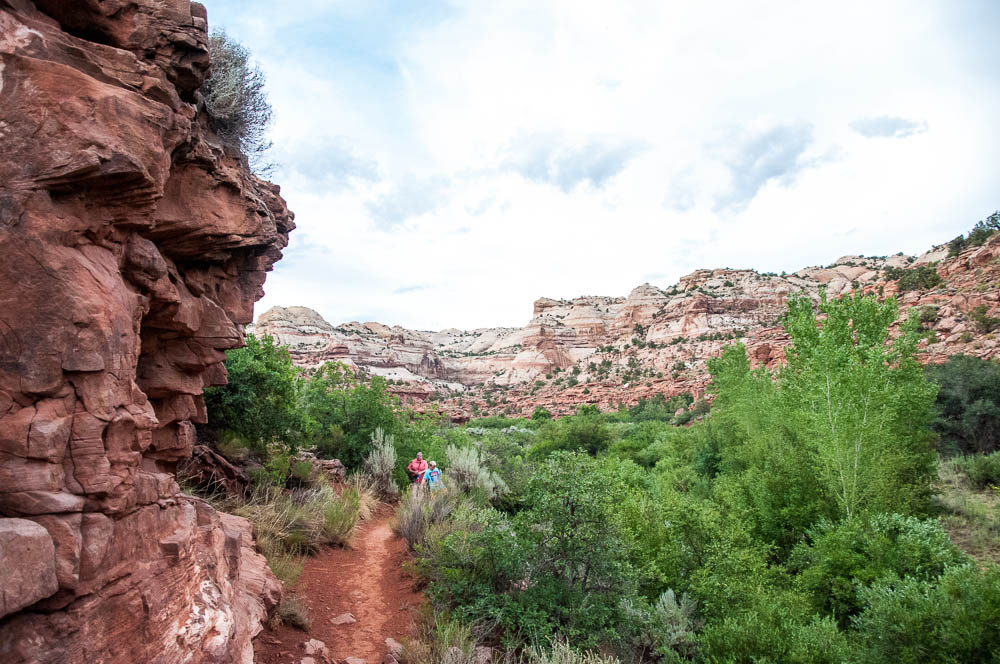 There was also a couple who showed up at the falls shortly after we did; young, fit, good looking, and in love. They took their clothes off and were swimming in their underwear, and the girl was wearing clothes skimpy enough to be a bit of a distraction for everyone. They seemed like they kept looking for a place to sneak away together, and there was a lot of public displays of affection. I wonder how my boys were processing that information. My youngest was super into the waterfall and swimming, and so I am not sure he noticed them much. My other son is a teenager, though, so I am sure he noticed that the girl was not wearing a bra underneath her wet, clingy shirt. Wouldn’t it be nice to be young again? Sometimes all we can do is miss our youth and sigh. Maybe someday she will have that same experience, and I wonder if she would be pleased or mortified to remember herself as a youthful, half-dressed waterfall beauty. 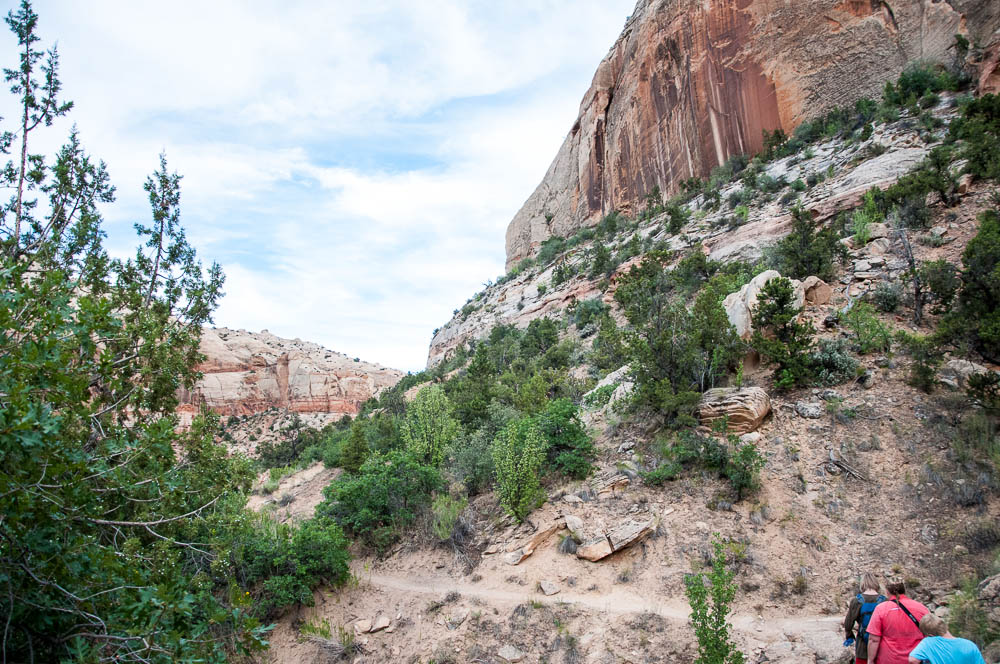 Am I glad we did it?  In the end, yes.  It was totally worth it.  Even though I didn’t have a great time doing it, I would actually do it again.  I would just prepare a little bit better – leave in the morning, pack more water, be in better health condition, and maybe not have such time pressure on my mind next time.