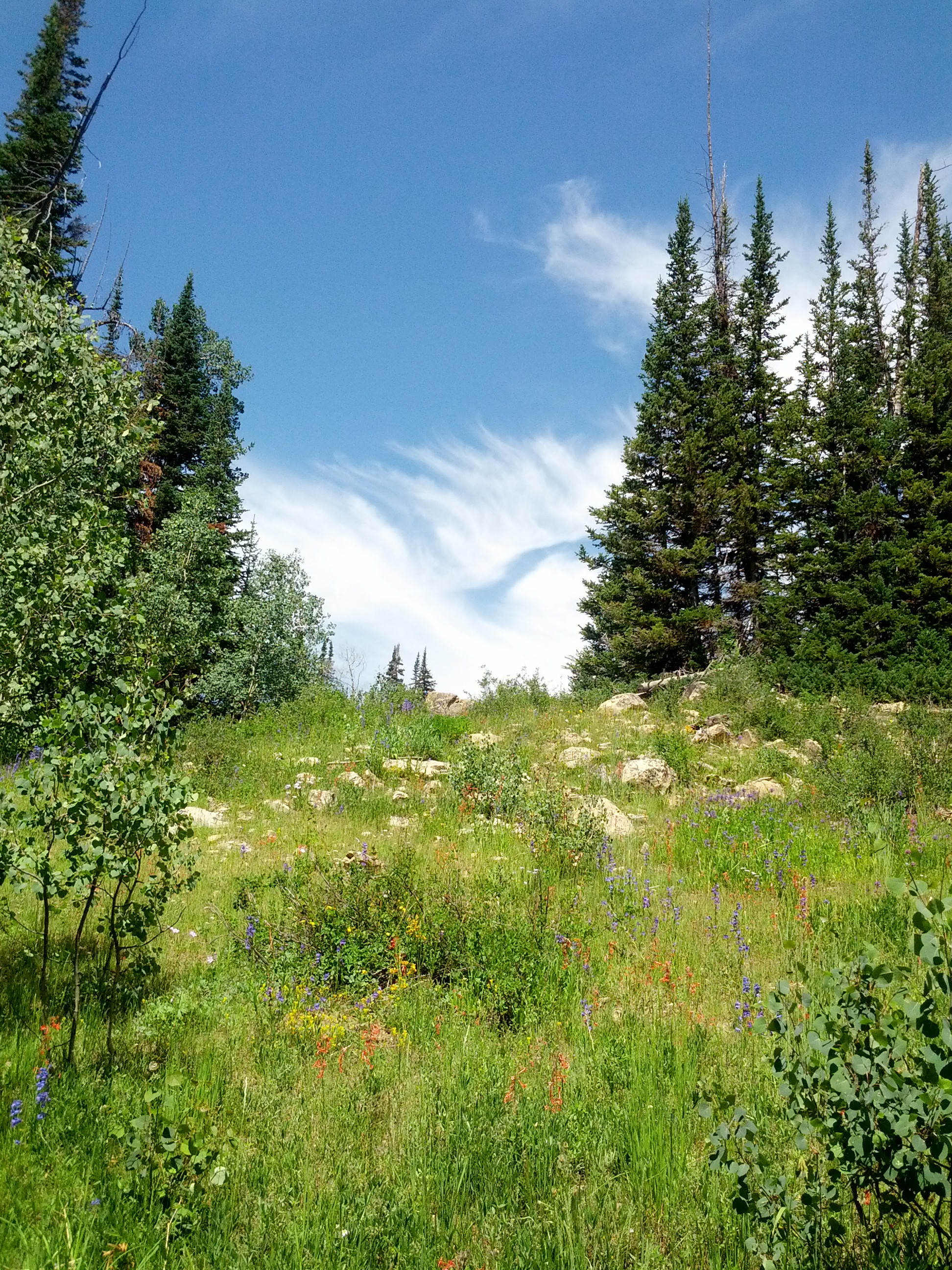 There’s a little place in Utah that we’ve been talking about for a while.  To tell the truth, it is a little bit of a sore spot for us, but it’s a beautiful sore spot.  Even though we’ve had some heated discussion about what went down at Potter’s Pond back in 2010, what happened actually represents the good in us, the complementary nature of our relationship.  As in, I am the risk taker, and he is the cautious one.  I push him to explore areas past his comfort zone, and he reins me in when I am going too far with it.

We still haven’t established who was in the right back in 2010, in my opinion.  All I know is, he strongly insisted we not pursue finding the grandfather cache hidden there, in light of certain danger.  This is what the area looked like when we got to it that June, over four years ago now: 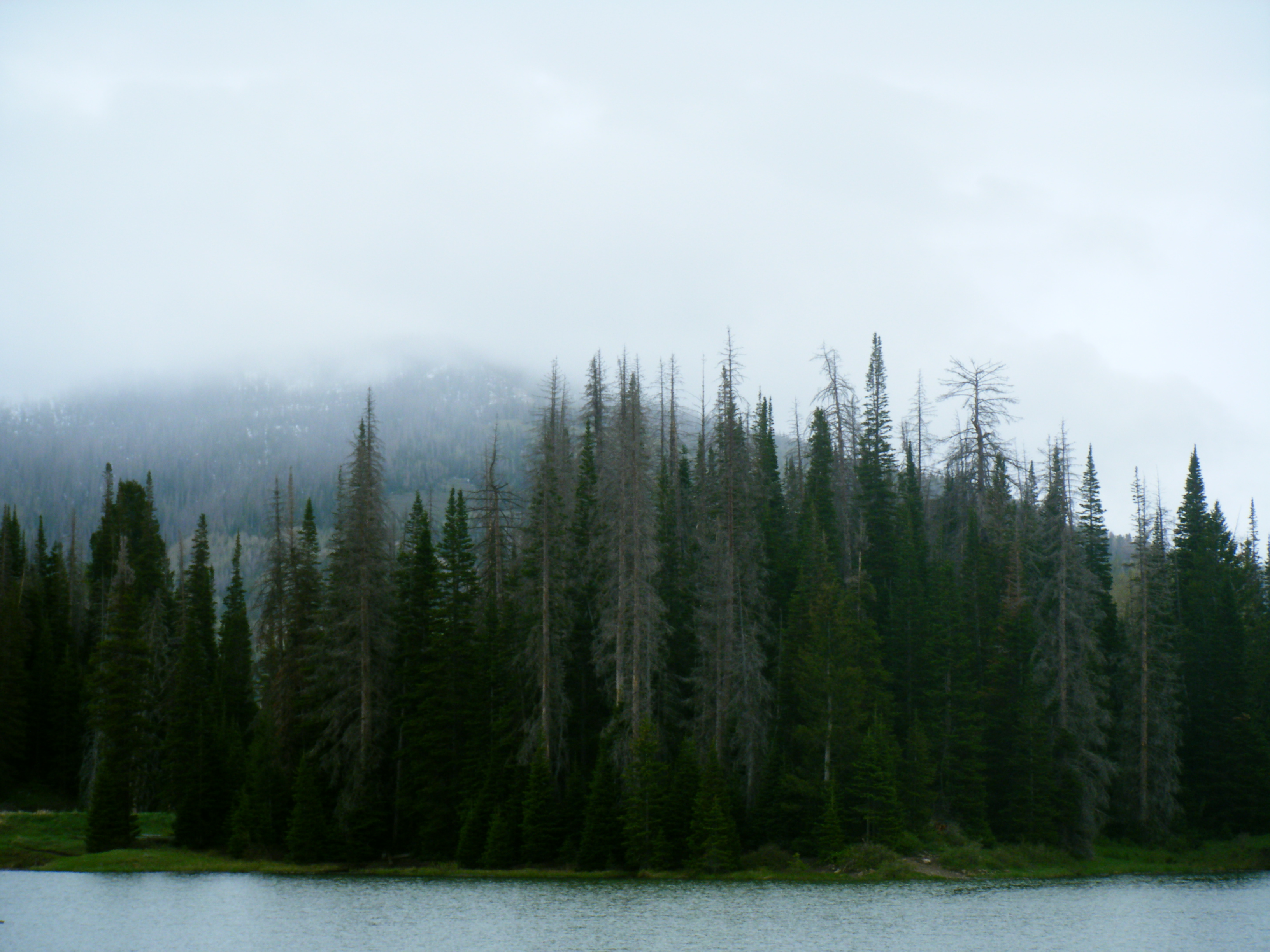 The cache seemed to be at the top of that peak, and there was a snow “storm” coming in.  Also, from the angle we approached it, it appeared that the only way to get there was to cross a creek, which was raging with cold water this time of year.  I am still pretty certain I could have walked over this fallen log and made it across the creek, then up and back down this “mountain” before the snow came in, but Jason didn’t think we should take any chances.  There had to be an easier way, I thought, but this was kind of before we were caching with smart phones, and I hadn’t really looked all the way through the previous logs to see if that was true or not.  We tried walking parallel to the creek, but we never did find a place where it seemed like you could cross.

Anyways, fast forward to this past July, just about two months ago.  We were back, and I was on a mission.  My, what a difference a month makes around here, as well!  This time, we could not have picked a prettier day to make the hour or two drive out of Salt Lake City, to the mountain area southwest of Price.  I was ecstatic about the weather, the beautiful wildflowers, the prospect of finally finding this cache.  I had done some research this time, and knew there was an easier way across the creek, where all we had to do is get the tips of our shoes wet in the crossing. 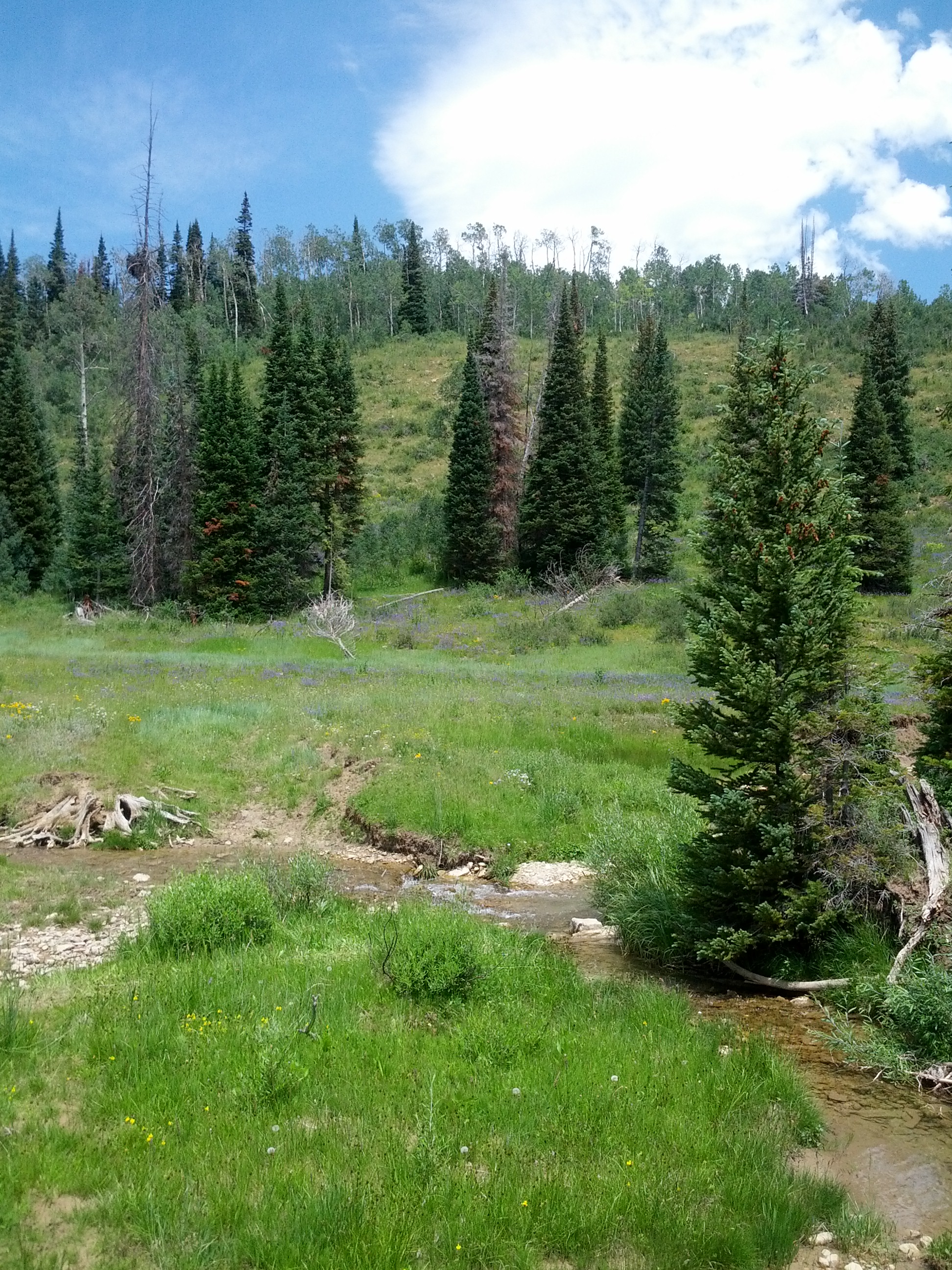 After this, the going was fairly easy for a little bit, but then the trail got a little more dodgy. It really was a horse trail, like they mention in the logs, and there were fallen logs about. I still can’t believe I tripped over one of them, falling flat on my face right when some boy scouts were coming down the trail ahead of me. Duh! As I dusted myself off, they asked if we were geocachers. I wonder, how did my clumsiness identify us as such? They told us the cache was just a little ahead, as were some others, even though they had not logged it themselves. They also warned us about the mosquitos, and we should have heeded their warning a little more seriously, as in put on some bug spray. We got swarmed so bad that it really took the joy out of actually making the find. We were in a darn hurry to just sign that log and get out of dodge at that point!

Now this is where the story leads us to our latest bone of contention. Jason insisted since we were up here, that we should find the geocache called Mountain Ninja that was also nearby. Well, Mountain Ninja is named that because you have to have a certain amount of agility to make the find and get back out. It is hidden in an area covered with downed trees. Now, back in 2010, I would have been loving this, but since I had that terrible leg injury with its long series of complications, including a very recent stint involving more physical therapy in which we were JUST working back up to my being able to balance on one leg, I was not a very happy camper about this situation. I grumbled, a LOT, to the point that it was making Jason nuts, and now he tells everyone we know that he finally took me up that darn mountain, and I could not get off of it fast enough. It was just this particularly challenging terrain I was unhappy about, though. That, and we kind of lost the trail on our way back down, so it was a bit of a bushwack downhill. I was so happy to finally find that darn little creek again.

The flowers and birds were incredible, though, and on our way out, we saw a shape running through the fields. I got a close up look with the binoculars at a badger turning his face towards my view for a second before scurrying faster. The drive in and out is a series of dirt roads that eventually lead to bigger roads that eventually lead back to the highway. We came in and out of the area through Fairview, where we stopped for a burger afterwards at a dive/gas station area that advertised the best burgers, and pretty much they were. We had an interesting talk with some retired older man and a couple of cowboys, one of whom turned out to be from the Tomball area, which was crazy.
And I don’t know who is more glad to get that stinking cache off our list: me, who wanted it so bad, or Jason, who was so tired of hearing about it.