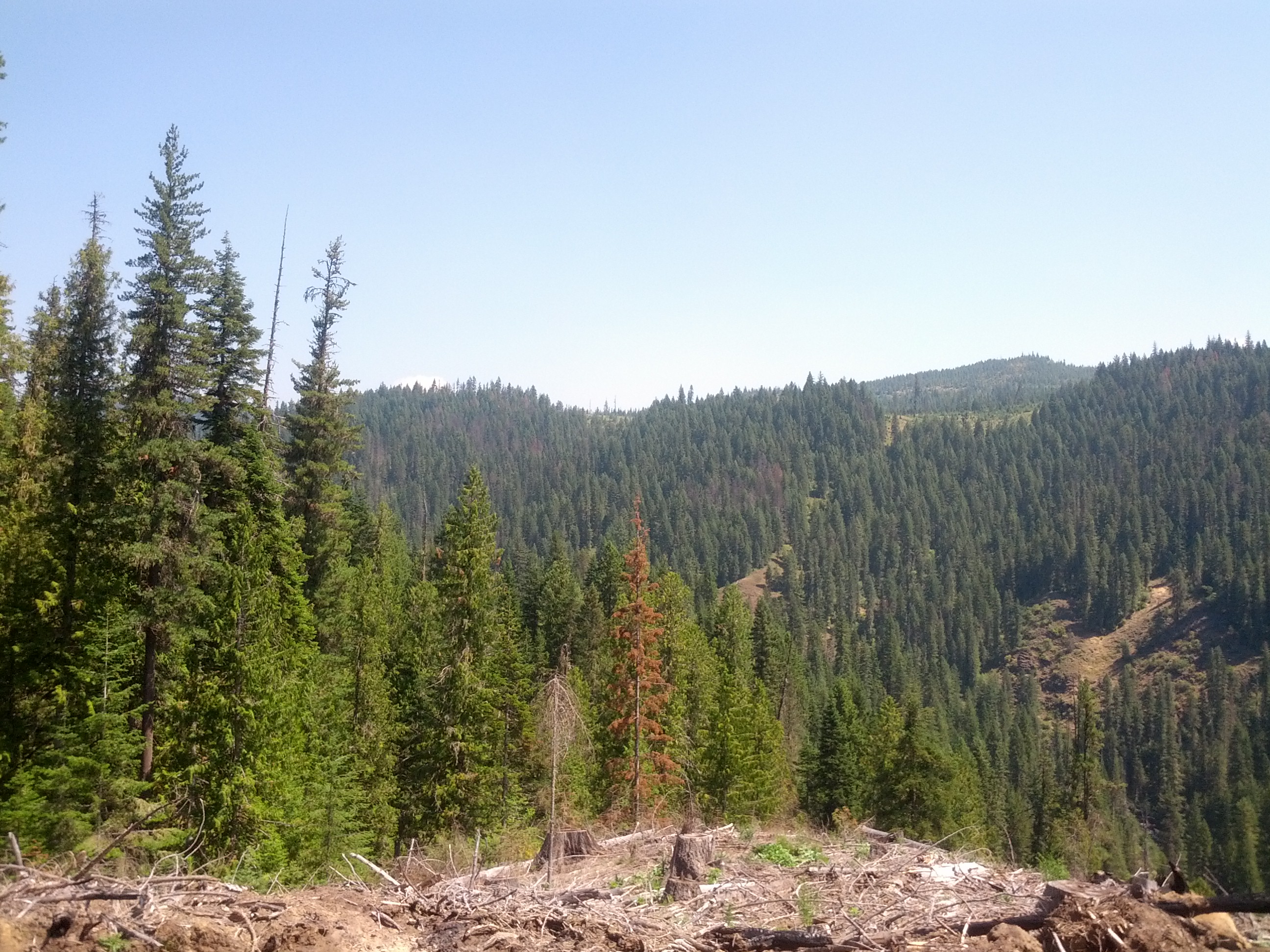 Thursday, July 17.
We almost didn’t want to leave the comfort of the Konkoville Motel, but we were on a mission. After a cozy hotel breakfast of the most delicious muffins, possibly some fruit and cereal, coffee and milk, we finally pulled out and headed out to the Idaho wilderness.
We were searching one of the oldest active geocaches (of course), Eggcellent, hidden June 21, 2000. This was literally within a month of the game’s inception, and just a few weeks after the oldest cache hide. This one is REALLY off the beaten path…so much that it has only been found 47 times before us in the fourteen years that it has been sitting out here. I’ve been eyeballing it on the map for a while, though, and I thought, what is the next time we are going to be in Idaho…we should go for it while we were here. Plus, it was kind of a double shot kind of deal, because along the way, we could pick up a find on another grandfather cache, Two Roads. This one has been out the same amount of time, with almost three times as many finds. I guess that is the difference between a difficulty 3, terrain one/short walk versus a difficulty four/terrain four, the other difference being about two or three hours in the approach. 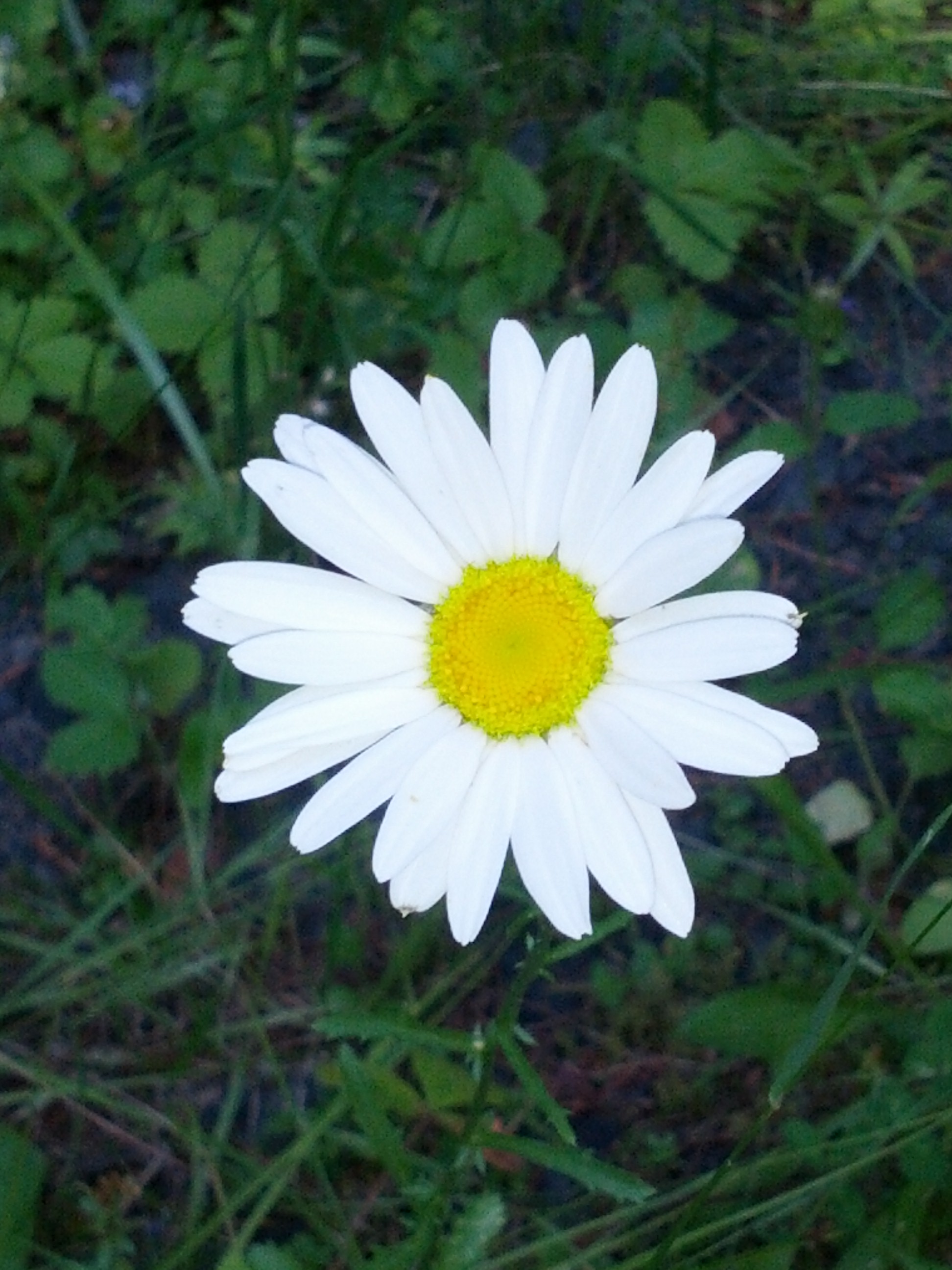 We had some discussion about the best way to approach Eggcellent. I had studied the maps and made a plan, but as usual, Jason looked at my plan really late in the game and decided to change it all. He didn’t think the route I picked would actually get us there, and so after some back and forth, he suggested we contact the cache owner, who was nice enough to write us back with some very specific directions. This was mostly helpful…although, when we got towards the end, things got a little hairy. In case you ever find yourself in the center of western Idaho, very close to the Washington border (nearest cities include Moscow, Lewiston, and Coeur D’Alene, although none of those are THAT close by), and you are wanting to find this cache, here are the directions the CO gave us. Be forewarned, though…you will need a vehicle that is capable of off-road, all wheel terrain and towards the end, you are going to have to trust your gut and use your spidey-senses to find the way to the cache. I am not even sure the last “road” is even a road? It is more like…tire tracks along a stretch of grass next to a wild, dark forest. 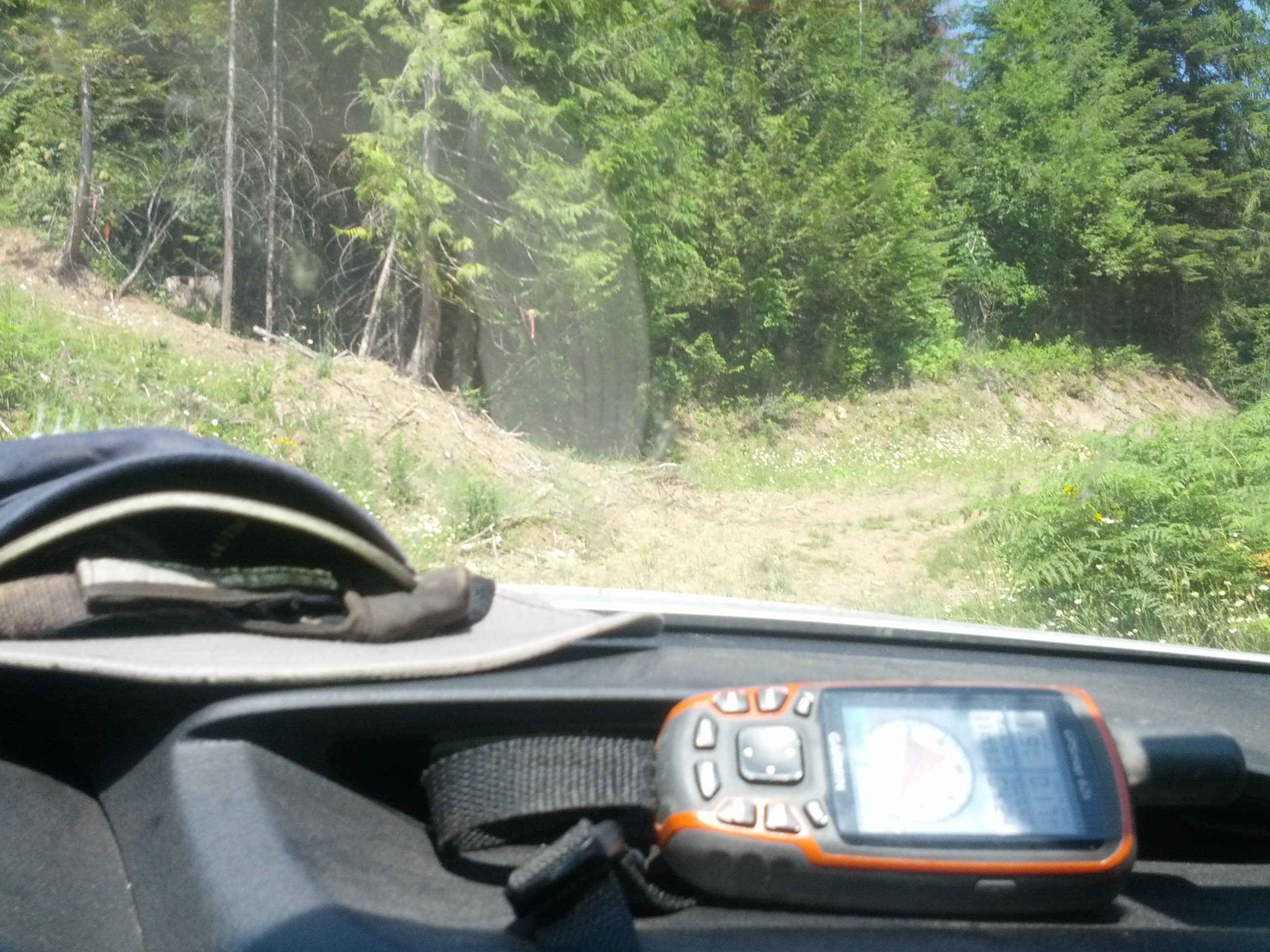 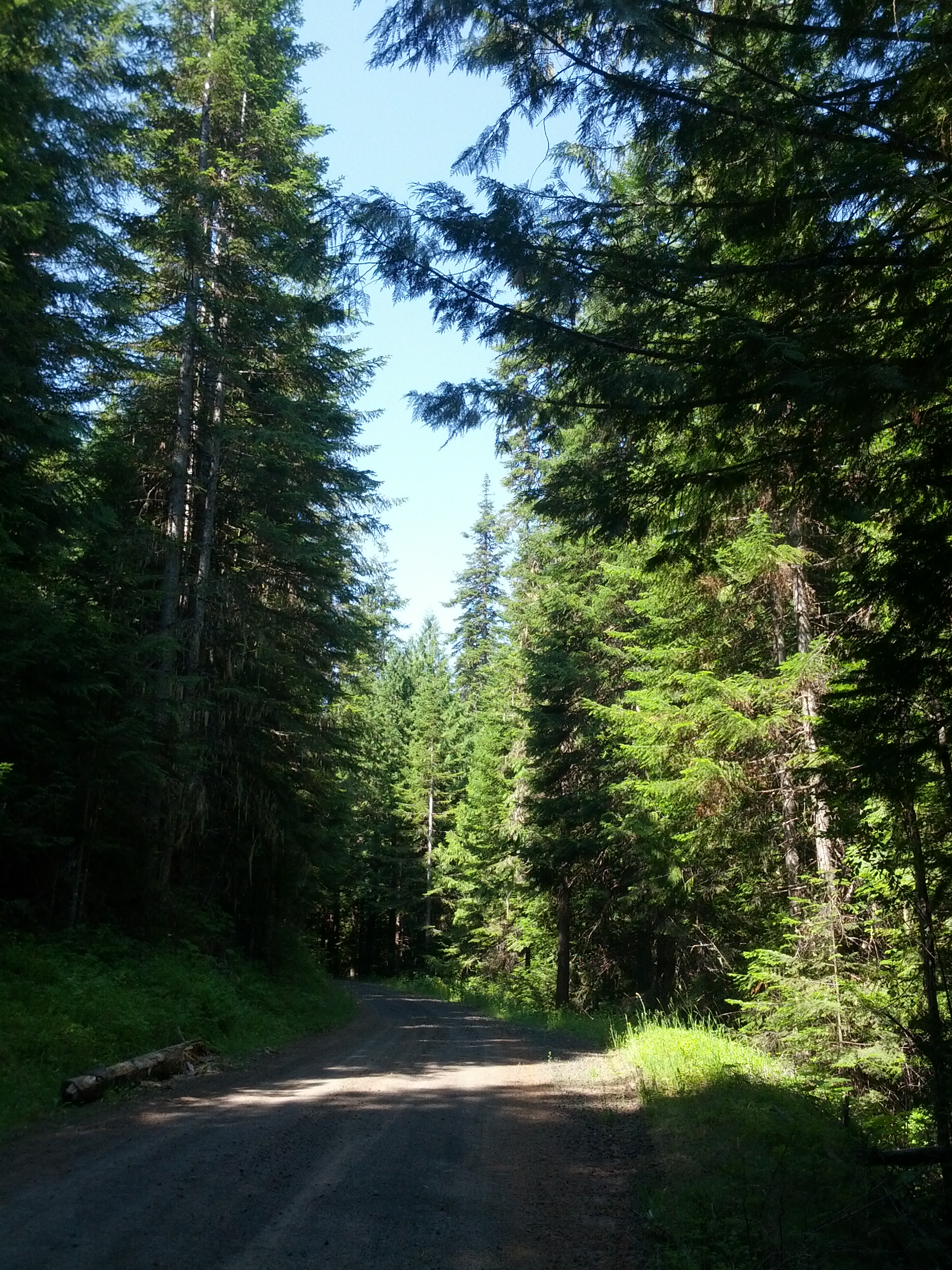 The initial entry into the forest made us really happy. The views were great and the road wasn’t too bad. We didn’t see anyone in the hours we were out here. We had smiles on our faces and were enjoying the flowers and the dark coolness of the woods. Each turn took us to a road that was a little smaller and a little rougher. When we reached the last turn, down the last road, we started to doubt whether or not this was actually the way. We ended up backing up and taking another right, which led us to an area that had been burnt out by logging operations. We turned right here by these flowers and parked the Subbie by the burn out spots, and then started walking down the road. 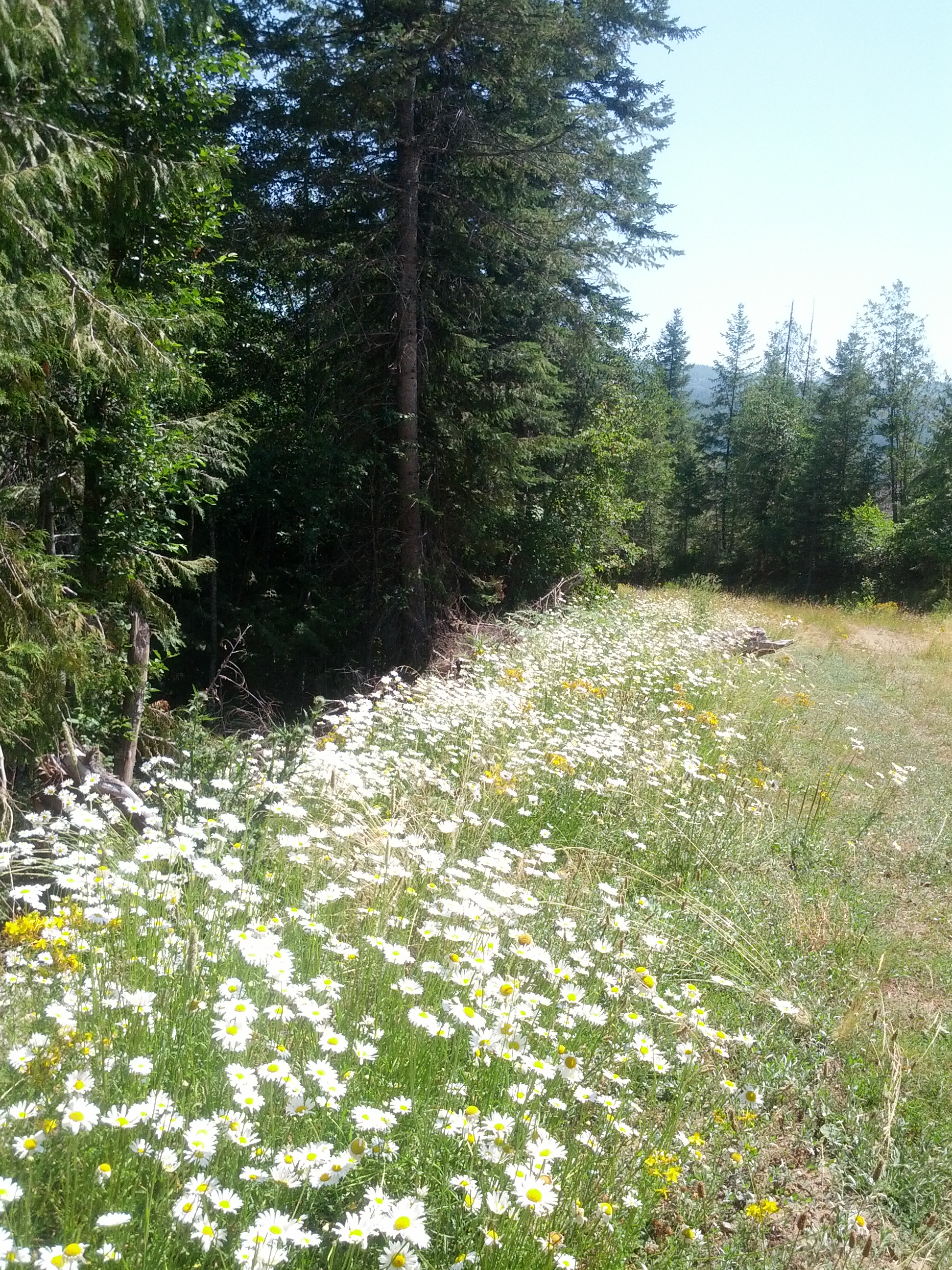 Now we come to the part of our adventure that we are still “arguing” about to this day. So, there was an animal in the woods just to the left of those flowers. A very, very big animal. I wanted to take a look at it. I am fairly certain that the creature making all the noise in the woods was exactly this here (NOT a picture we took. This one has been floating around the internet for some years): 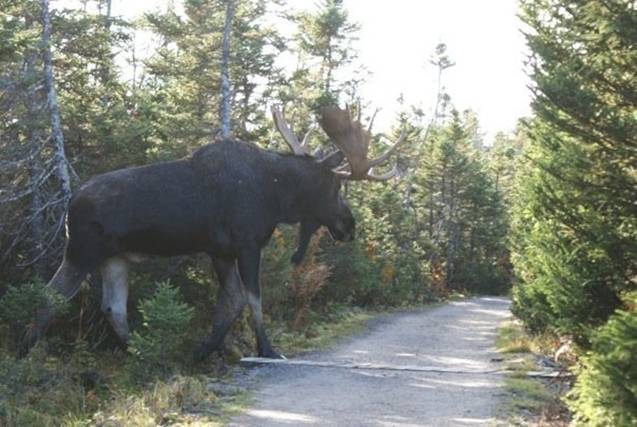 Anyways, Jason wouldn’t let me go look and see. Instead, he grabbed two small logs, and began banging them together rhythmically, talking loudly, even singing a bit of a loud chant/song. The thing in the woods grew silent, and maybe disappeared, and with it went my chance to see a really awesome wild animal. It had to either be a moose or a bear, and all I wanted to do was look…maybe get a picture from a distance. I still feel a little bit cheated, but he says we are better safe than sorry.
After this, we walked down the road about a third of a mile, going around a corner and then finding the cache in the woods to our right, almost directly across the road from where the giant animal was walking. The whole walk, I kept expecting it to walk out in front of us, and it made me feel vulnerable and excited at the same time. It turns out we could have driven right up to the cache, and perhaps maybe even the road we were originally on would have gotten there from the opposite direction. Found it, though, and made it back to the parking area. Then, despite Jason’s caution about the wild animal, he had me stand right there by the flowers where we had first heard it moving around, by myself, and take videos of him driving the Subbie down the burned out hillside that we parked at. Hilarious.
We took lots of videos on the way out, and when I find them, I will upload them. This is something that we did a lot of in our 2010 road trip and haven’t done much of since, and it was fun to revisit this. For now, a lasting picture of the road out: 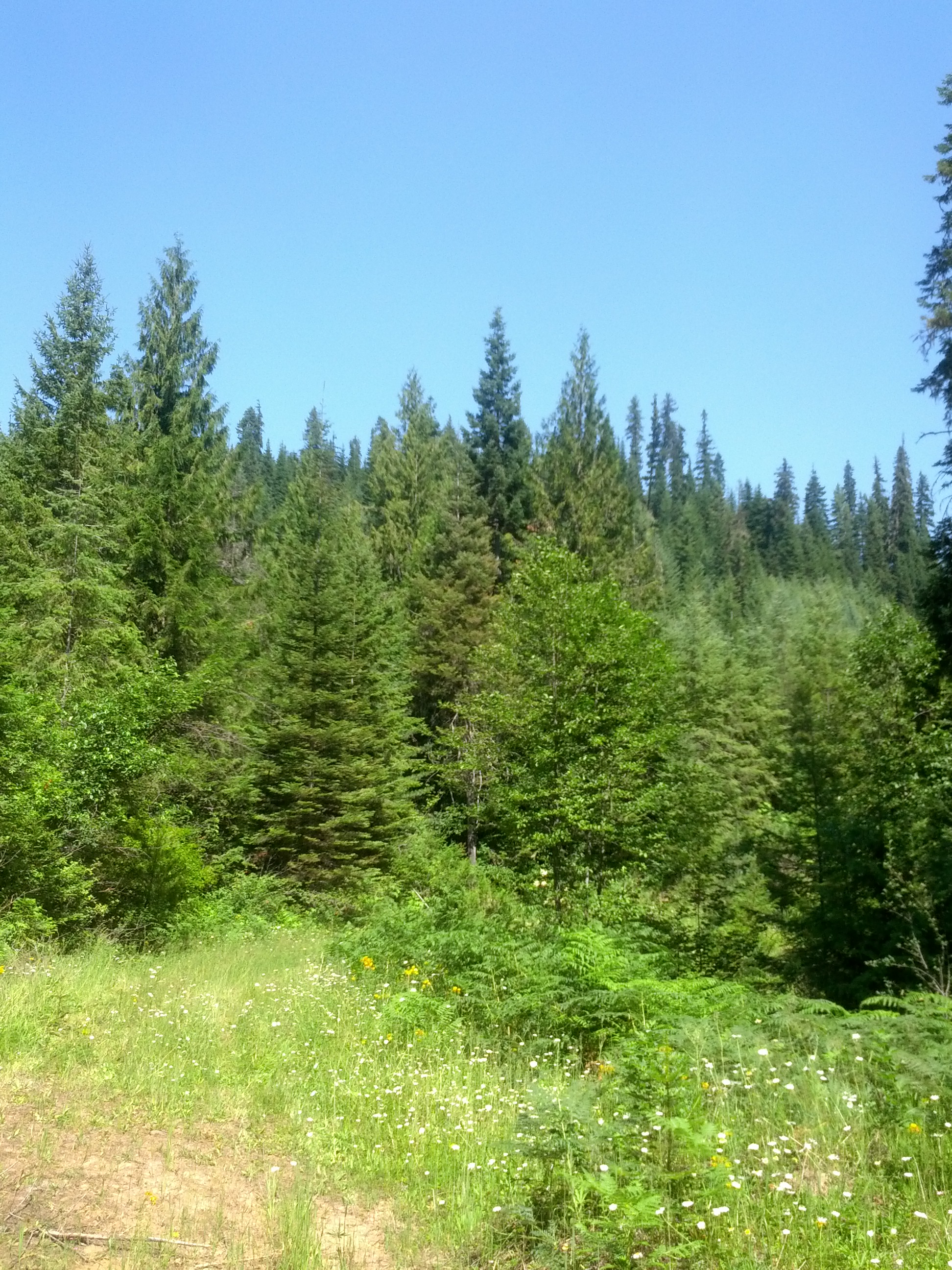