My second child is sometimes a bit of a mess.  He doesn’t really know how to be quiet.  Given that, we should have known better when we decided to bring him into the forest with us when we stopped in Bear Creek Park to look for the rare and elusive Greater PeeWee.

However, what are we going to do with him while we look.  Besides, he is very interested in “legendary” birds, and I am trying to keep him interested in looking for birds so it will be easier to drag him along with us.

Only, he did kind of ruin the experience for us.  We were trying to walk softly through the woods as not to scare the birds away, and he was clomping behind us.  No matter how I tried to quietly explain how to roll from heel to toe to make as little noise as possible, he insists on shuffling loudly and then lifting his feet heavily.  His brother says he is about as quiet as an elephant in the forest.  He’ll never sneak up on anything.

It is frustrating though, when you are trying to listen for little noises, like cheeps and peeps.  Some of the bird noises are at such a frequency that Jason can’t hear them.  In a way, you would think Jason and I would make a great birding team, because I can hear the birds better, yet he is better at making them out visually.  However, I don’t know how to identify them on sounds alone yet, and he is no good at identifying at sight.  So it is kind of like the blind leading the blind out in the forest, followed by the loud, when the three of us are out together, and we get little accomplished.

Jason was trying to show me the place in the park that he has discovered as a peaceful escape during his lunch break.  He wanted me to understand the tranquility he finds there, and let me see and hear all the birds that surround him in his lunch walks, but mostly we just heard kids in the park nearby screeching, Kaleb clomping, and the thumps he was making with a stick he picked up along the way.  He is forever picking up sticks and wacking the trees and bushes with them, playing at swordmanship. 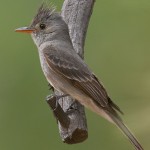 visual on a bird that MIGHT have been it). We did hear a Barred Owl out there, and saw a handful of robins, warblers, and kinglets, but it was nothing compared to the experience Jason usually has out there.  I’ve decided we should go back in the early morning or late afternoon sometime and just sit for a while…without my noisy second child…in order to see this ordinary-looking bird that happens to be living way outside its normal range.