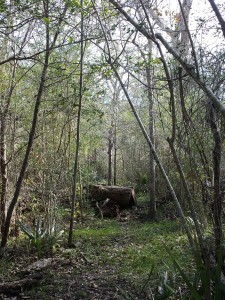 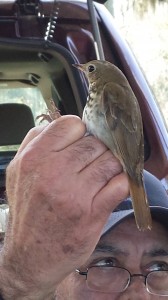 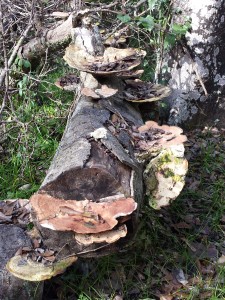 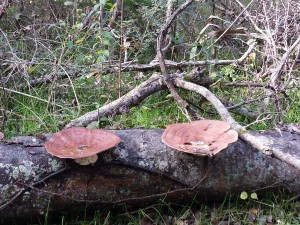 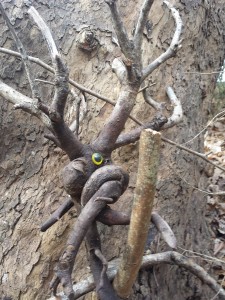 Most years, we try to go on a First Day Hike.  All fifty states have participating state parks that participate in this initiative to get people outdoors and active.  For us, it is a way to start the year doing something we love. 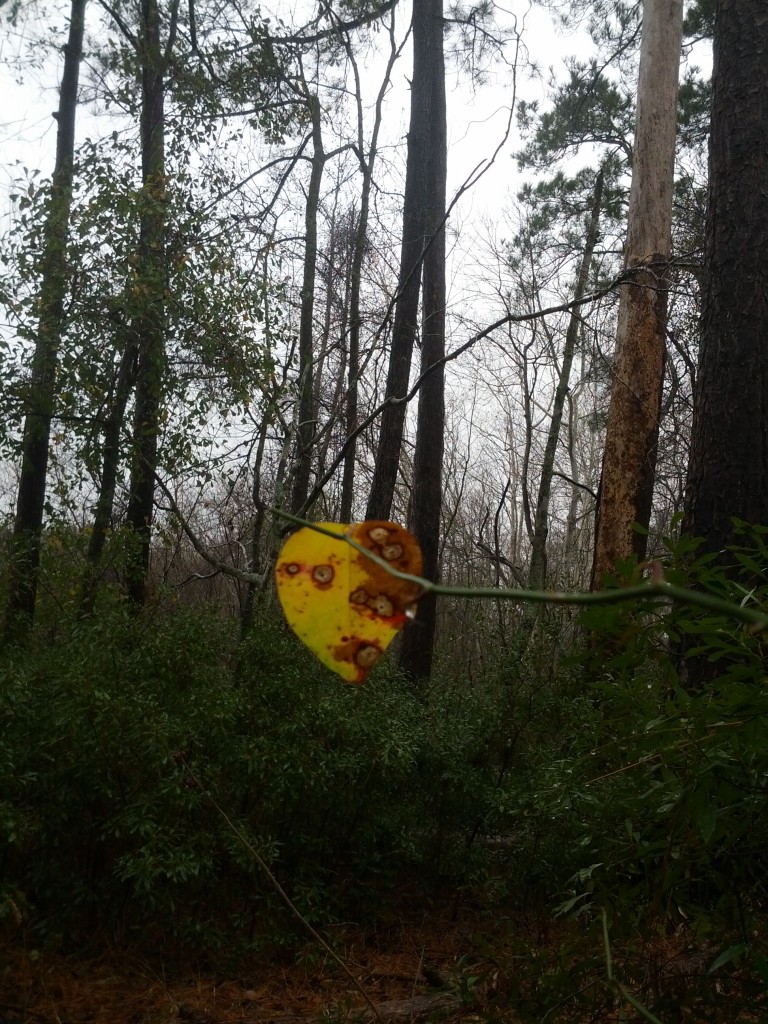 This year, we decided on Huntsville State Park because 1) our friends were already there and 2) my sister offered to meet us out there because she was also interested in a hike, and we were interested in going by her place afterwards to see what kind of surplus baby items she might have.  This is the closest park to her house.

When we woke up, though, we started to question this decision.  Already a friend at the park was telling us it was supposed to rain all day, and she wasn’t planning on going hiking.  We packed up the rain gear and were trying to be optimistic, but the light rain started as we left Katy and only got more intense as we reached the park.

We weren’t going to let the rain stop us, but we also weren’t that motivated to get out in it once we got to the park.  We spent a couple of hours just hanging out under the awning of Diane’s camper – the four of us, Diane and her friend, and then Scott and Michelle, some old-time cachers from way back.  We had driven all this way and were hoping the rain would clear up.  I really wanted to see some birds and visit the forest, but it wasn’t looking good for the home team.  It also seemed like my sister and her kids weren’t prepared for inclement weather, so it was a real surprise to me when she actually texted me that they were in the park and ready to go hiking.  The rain actually cleared up, just barely drizzling as we made our way along the Dogwood Trail and then the Prairie Branch Loop. 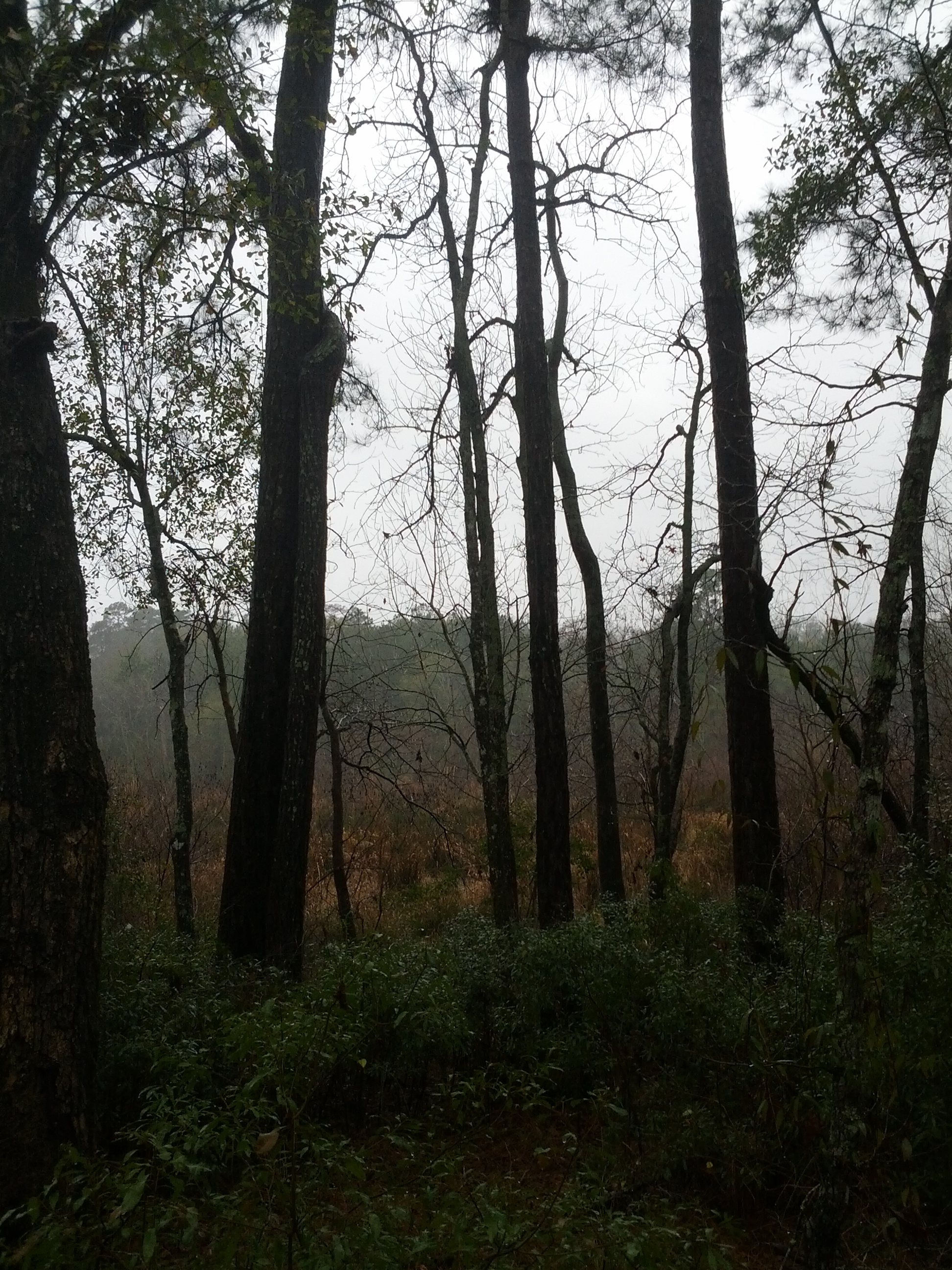 It actually turned out to be quite a nice little hike that we took.  We saw some interesting things in the woods, like little tiny mushrooms and crazy colored lichen.  I picked up a couple of pieces of moss, bark, and leaves along the way, thinking maybe about using them as pieces in a naturalist notebook or a little terrarium commemorating local flora and fauna.  I also saw a surprising number of birds, conside 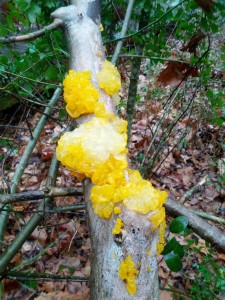 ring the weather.  This is a list of what I saw that day at the park: both black and turkey vultures drying out their wings on high perches, Carolina Chickadee, Pileated Woodpecker, Northern Mockingbird, American Crow, Eastern Phoebe, American Robin (a whole flock of them deep in the woods), Mallards, and a Pied Billed Grebe diving in the lake.

I ended up very pleased with the whole endeavor, and glad we took the time to go out there, despite the weather.

Over the weekend, I took two nice walks and a short bike ride that also yielded an unexpected bounty.  Saturday, I spent about an hour out on the Addicks Dam getting a little exercise and finding a few geocaches.  I thought at first that I was only going to see the “usual suspects”, but when I stepped out off the hike and bike, went across the dam, and got my feet a little wet in the low-lying area on the wild side, the birds got a little bit more interesting.  I spotted a whole little flock of Cedar Waxwings.  Savannah Sparrows flitted in and out, and I caught a couple of good sightings with the binoculars of a yellow rumped warbler and a blue-grey gnatcatcher.  I spent some time checking out one bird that I eventually decided was a female Eastern Bluebird, and spied another Eastern Phoebe.

Sunday, my son and I rode our bikes around the neighborhood feeding the local ducks.  There is a great flock of Muscovy Ducks in our neighborhood and I have no idea how the one pond supports all of them, but sometimes they do wander when food gets scarce.  This day was cold, and a great number of them were sitting still in the grass or had wandered far up the little creek to forage.  We saw probably all thirty of them that usually live out this way, plus the two white ducks and two buff colored ducks that live with a couple of Mallards at the upper end of the creek.  I was astonished to see a Belted Kingfisher flying around the upper pond as well.  I had never seen one of these before in our neighborhood, nor had I seen cormorants out here, but there were 1-2 of those in the upper pond as well, in addition to the typical Great and Snowy Egrets.

Later, I took the dogs to the dog park and for a walk around Polishing Pond in Cross Creek Ranch.  At first I was like, well the bird action is certainly boring here, because it seems like all there is are American Coots out in the pond.  I kept some record, though, of occasional glimpses of other waterfowl, only to discover at the end that I had also seen Gadwall, Redheads, Moorhens, and Northern Shovelers out in the water.  In addition, a delicate looking black and white bird turned out to be what I believe is an Eared Grebe, something I had never seen before.  I possibly also got a shot of the Glossy Ibis I saw out here a couple months ago, and potentially Black Ducks and Curlews, but I am going to wait to positively ID those before recording them.  Chipping Sparrows flitted around in the grass and landscaping along the curbside.

The hawks are out these days as well, and I have seen Red-Tailed and Red-shouldered perched up on street lights and power lines.  All in all, I recorded 29 species for this past week/holiday, which I don’t think is that bad at all, considering I really did not expect to see much except the usual.