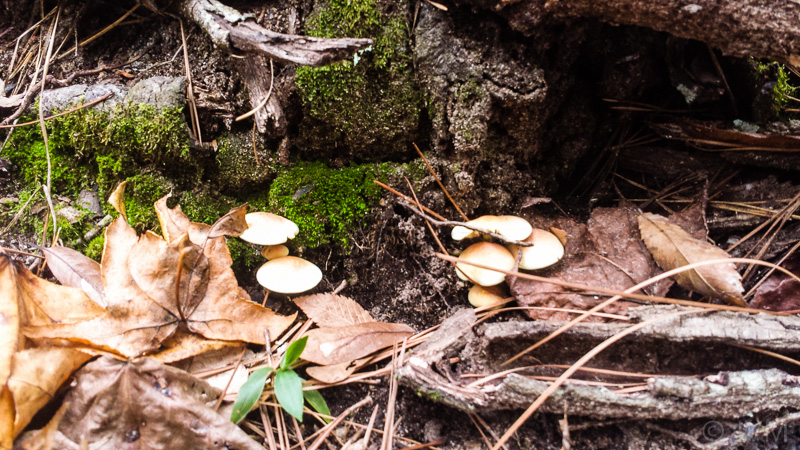 We’ve had quite a few walks in the woods this year, but all seemed to have a sub-text to them. We’re walking in the woods with a group from Hike It Baby, or like the weekend before, with a Meet Up group composed of people with similar interests. We were there to walk, but also to make or deepen existing friendships. Walking was something we did as we talked. I had this idea that perhaps I wanted to get back to the roots of what drew me to the woods: a time of introspection, a time for mutual wonder, a time for quietness and reconnecting with the physical world around us, the spiritual world within us, and the emotional world between us.

So it was that my husband and I found ourselves alone with the baby on this fall day in the woods to do exactly that.  We had left the older boys with grandparents to go shopping, and we were escaping.  However, there were qualities about the morning that were less than ideal.  The weather had been nice all week and now had turned overcast and threatened to rain.  So also had our emotions, and truthfully we had gotten on each other’s nerves so much that by the time we got to the hiking location, I wasn’t really sure I was in the mood to go hiking with him (and it was probably mutual).

I had decided that we had spent enough time exploring W.G. Jones State Forest on the south side of 1488, and that I wanted to explore the north side, the side that claims the Sweetleaf Nature Trail.  Here are some tips about this trail that we learned the hard way: 1) it is not really stroller friendly, so if you are bringing a baby, you best bring that baby in a carrier and 2) you really need to call the office and make reservations to park in the area, and make sure you have the combination for the lock for the gate that allows access to this area.  It is probably best to call in advance of the weekend, since the office that would give you the combination is not open on the weekends.  We found this out the hard way, and if we didn’t have a vehicle with four wheel drive (and a man who knows how to use it creatively), we would probably still be there.  No, not really, we probably would have called a friend to come pick us up and recover the vehicle later, but it was a close call.  I really had no idea when we followed a troop of cub scouts into the parking area that they were going to lock us in when they left. 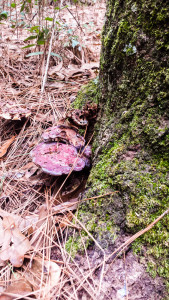 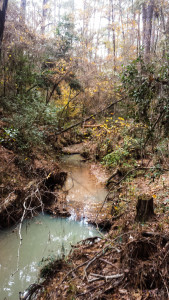 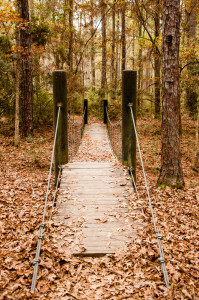 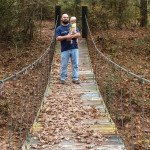 In a way, I wished the cub scouts had never been there, but their leaders probably planned this in advance and had called to make the proper arrangements, unlike us. If the Scouts hadn’t opened the gate, though, we would have parked on the south side and walked over, creating a much longer but in some ways safer walk. At any rate, there had been two troops of them, plus leaders and various cling-ons, so whole hordes of slow-moving and loud-talking people were on the trail with us. It wasn’t the best way to enjoy peace in the forest, although some of the children made me smile in their cuteness. At one point, we had to hold off on crossing that suspension bridge in the pictures because the scouts were crossing it instead, so we pulled off to the side of the trail and held this impromptu photo session that resulted in some favorite pictures. 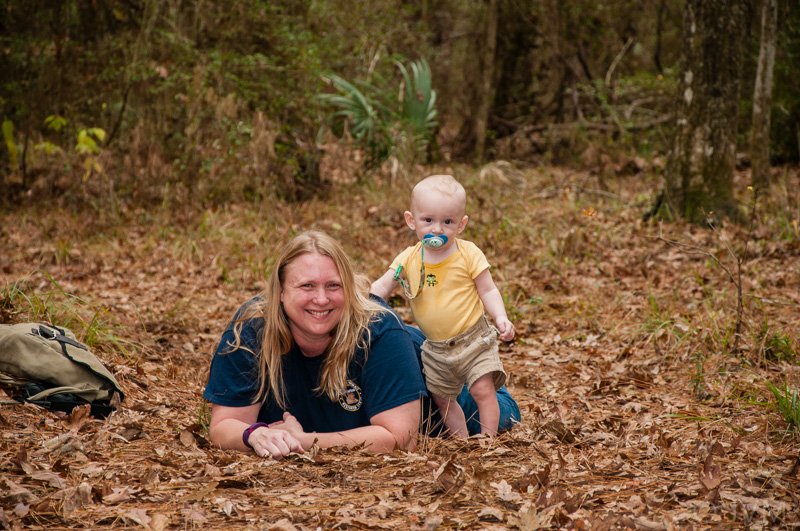 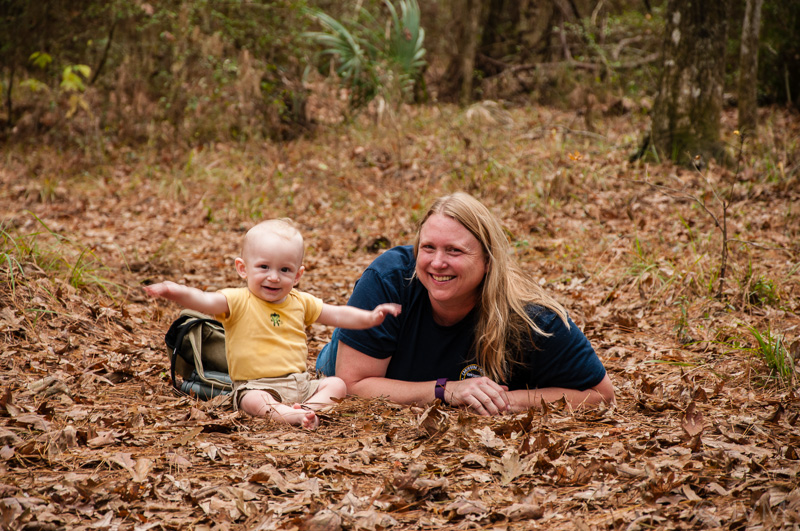 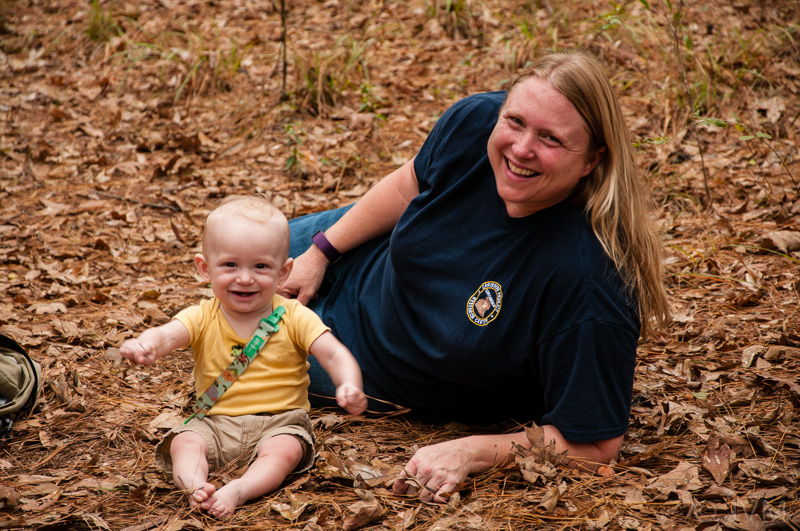 We had two missions for the morning, which kept us engaged in a mutual task. We were looking for geocaches (the initial common interest that drew us together to begin with), and also half-heartedly searching for the endangered red cockaded woodpeckers that are supposed to live in the forest. We didn’t talk much, but had to help each other get the BOB stroller up and down and around various roots and inclines. There was one point when we reached a different section of trail, one composed more of tall pines with wide open trails versus the knobby knees of the cypress down by the creek section, where we spread out from each other a bit more, as we needed each other’s help less. A storm was approaching, and the tops of the pines were swaying in the wind. I felt the excitement in the air, and considered what the woodpeckers did when the rains came, and if they were clinging to the branches or safe in little holes. I thought about my husband, who sometimes in the night seems to me like a solid oak, the kind that stands for years unswerving in face of the storm, and how he had said recently that he felt like this year and all its challenges had brought us closer, and yet sometimes I felt, further apart. Like this day, where I knew as I watched the wind that he was also watching and enjoying the same scene, even though he was a few hundred feet ahead of me, and perhaps he even thought like I did that it brought back memories of some forest we had discovered on one of our road trips.
The rain started right as we reached the car, and the mosquitoes started in just a little before that. We reached safety barely, out of the storm, and back to some level of peace. I appreciated that he was willing to get up early with me and drive an hour and a half to spend the time with me here, and then drive back, stopping to try a fun mid-eastern restaurant on the way home without grumbling, and by the time we were home, we were in a much better mood.  And this, my friends, is part of the reason why the forest draws me on the weekends, even when it is hard to get to, even when I don’t always feel like it on the way, even when it is hard; because in the end, the reward always make it worth the struggle.   Although, I think I would have been just a teensy bit happier with the trip if we had actually seen one of those elusive little black and white woodpeckers.