They say all you need to geocache is a sense of adventure and a GPS. These days, with the advent of the smartphone, you really don’t even need that GPSr. I think that sometimes we geocachers get so caught up in the game, in the numbers, in the bragging rights and competition, that we forget what got us into geocaching in the first place: that sense of adventure, a desire to explore our surroundings, to find something we never noticed before. 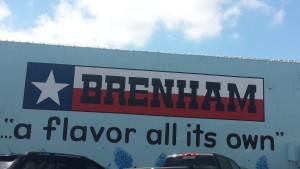 This sense of adventure is probably one of my defining character traits, and I brought it with me to the Annual Texas Challenge (and Geocaching Festival), which was held the first weekend of spring break in Brenham this year. I had taken the Friday off work to spend Thursday night through Saturday night in Brenham to participate in as many of the events as I was willing to sacrifice other time for (I had left my family behind for the first night). 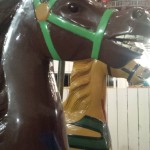 Part of the reason I wanted to go up on Thursday night was to experience the Antique carousel at Fireman’s Park. It is such a cool story to think about how a group of citizens just found the horses abandoned in a field in 1932. Now that is a real cache! They managed to get the city to purchase the horses from the landowner and refurbish them for the delight of generations of people in Washington County. After some research, it was determined that the horses on the carousel were made sometime in the late 1800s. The carousel has been through some owner changes and refurbishments since, but the city continues to keep it going for all to enjoy. 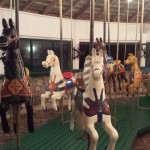 Despite the fact that we couldn’t actually RIDE the carousel horses (for kids only), it was still pretty awesome to sit in the bench seat or stand next to the horses and ride this ancient carousel. We had an ice cream social that night, complete with a barbershop quartet, which most people were too busy talking to listen to. However, the best part of the evening for me was when the whole event was over and all had left the pavilion except a handful of us core folks, and yet the barbershop quartet was still there singing, just for fun, practice, or for each other. They were singing a beautiful rendition of “Bridge Over Troubled Water” that I was particularly enjoying when it was time for me to go, but memory of them singing that song is a little bit of a treasure.

The next day I had no particular plan except to show up, so in the morning I found a few places and had a coffee from the little coffee bar in the Pomegranate store/Funky Art Cafe that literally made me happy, and that I will look for in all the other coffee shops I go to in the future. I went to Fireman’s Park and watched Gary and his group assemble “cows” made out of plywood cutouts for a “milking” contest at the park before going for a ride with a couple I had met a few years back (Sue and Ron) to find a few caches with “Nashville Joe”, a guy who is a full-time RV-er, a lifestyle which I found fascinating. The caches we found were not that interesting in themselves, but they were near these juxtapositions of civilization and nature that kind of reminded me of what geocaching is kind of like, the mix of modern technology with bliss in nature. 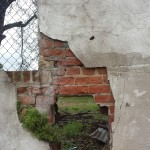 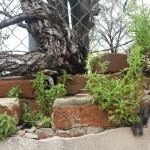 another couple to hang out with, Kenny and Kelly, but as we were preparing to go to lunch, we also needed to find Donna and Lola, who had the coins I needed for registration. We all ended up going to lunch together at a place called Must Be Heaven, at which I had a delicious muffuletta sandwich. This restaurant is like an old fashioned soda fountain but has lots of healthy options for those on diets. I enjoyed it, but I am not the only one, because it has 4.5 stars out of 235 reviews on tripadvisor and is rated #1 out of 63 restaurants in Brenham.  We also later had a dinner at Yumm! Eats and Sweets and Andrea’s Taco Shop, and a lunch at Smitty’s Cafe.  All in all, I found myself pleased with all our culinary choices in this 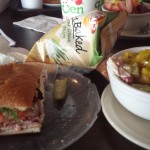 town, and I would say exploring new restaurants is one of my favorite hobbies.
Afterwards, I rode along with Donna and Lola to work on some lab caches. Lab caches are special finds set up for certain events, and are only available during a specific time frame. You don’t log them on the regular website, and they won’t show up on your list of finds, but they will count as a number for your find count. Instead of finding a container, you find a specific thing in a location, details of which are giving on the external website link, and you log each one by typing a code word into the website for each one. I worked on the lab caches with these two girls and then later with Jason and Sebastian, and 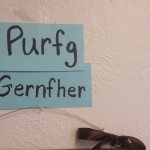 here are some pictures of what you might find at the location. Through the lab caches, we had 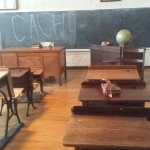 the following experiences over the weekend: discovering a sweet shop called Bliss that sells gourmet cupcakes and truffles, walking through Washington on the Brazos State Park down to the Brazos River and observing how high it was at this time, buying ice cream cones at a classic old grocery store/bbq shop at the corner of a dirt road, pushing the stroller through Main Street in Chappell Hill and checking out the shops, being the only visitors at a quiet old museum and a park in Independence and letting Sebastian run around and explore.
These were some of the best times of the weekend.  Memories of these experiences are the real treasures we find while geocaching.
We also work 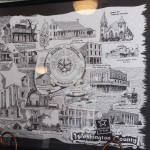 ed on finishing our Birthplace of Texas GeoTour, and by Saturday midday, we had completed enough to claim our geocoin that you earn for obtaining 25 points on your passport. Points can be earned by finding the geocaches as well as eating, shopping and lodging in Washington County (but you have to turn in your receipts to prove purchases). Jason had wanted to help the scoring team get set up with another computer and do some other misc things, so I put Sebastian in the stroller and walked from the Chamber of Commerce to the Visitors Center down in the old-fashioned downtown area to turn in our passports and pick up our coin.

After we picked up our coin, we had fun exploring all the little antique shops and art galleries. One of my favorite finds during the hour or two my baby and I strolled down there was this stand of cool little stuffed animals made out of alpaca fur. They were so soft and neat looking and I contemplated buying one for Sebastian, but in the end decided they were a little too pricey 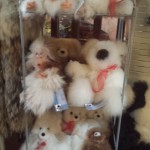 Over the weekend, Sebastian explored natural areas and items, discovering things like the magic of dandelions and the boldness of older kids.  He helped us find actual geocaches, sift through antiques, and learned about cisterns at a little historical area that we found walking about downtown.  He had fun all the places we went, and so did we.    For this reason, now Brenham will be dear to my heart, the same way Bastrop became after the Challenge that was hosted there in 2014.  We have been back to Bastrop quite a bit since, spending weekends and money there having further adventures, and I feel like we might do the same in Brenham in the future. 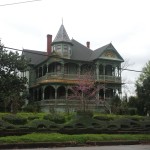 ason, I think that a geocaching event is more than just claiming a smiley, getting the icon on your profile.  It is more than the people you meet, and the other caches you find in the area.  Just like geocaching is mostly more about the journey than the actual destination/find, this weekend was more about the exploration than finding hidden containers.  In a way, the whole town was our “cache” – a treasure trove, a place where valuables (like the neat little alpaca toys, great coffee, all the fun places we discovered together) are stored.

I didn’t compete in the actual Challenge this year, but I had more fun than I usually do, less pressure, and more time to just explore.  There has been talk (usually from my husband) that maybe we should do away with the competition aspect of the Challenge, as it just brings out the worst in people.  Maybe after this year, they might, but I think in the future, I am going to approach big events like this with the same attitude of exploration, and find all the neat little gems about the town along the way.

Here are some other scenes from downtown Brenham: 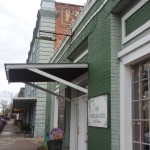 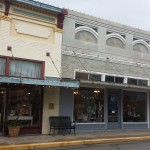 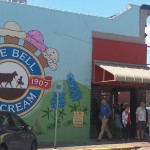