It was eleven am on a Sunday morning in Lucerne, Swizterland, and church bells were calling across the city, drawing the faithful to the steps of Hofkirche St. Leodegar.  A motion of energy, the click clack of women’s heels, the compulsion that led me to try to open the doors of every church I saw in my week in this country, the timing of events all pulled me along with the others in the vicinity to enter the ornate wooden doors and find our own personal wooden seat for Mass.

This cathedral, a distinctive site on the Lucerne skyline, had been calling people in this same manner since at least 1639, if not before in its many manifestations as an Benedictine abbey, monastery and universal church going back to the 8th century. 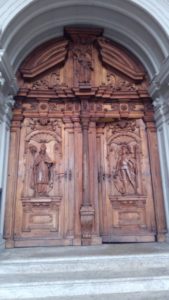 As the service began, a line of altar boys entered the space in front of the altar from the right hand side, followed by an elderly priest.  They formed a half circle in front of the altar, the priest in the middle in a green and white sash.  The service began with music, followed by a reading.  It was not in English, but if I closed my eyes and concentrated, I could almost follow along.

My mind drifted back on some of the experiences from my trip. In Basel, I had walked nine miles over six hours, experiencing as much as I could soak up in the time I had.  During that time, I stopped by the Basel Minster, a long-standing cathedral, marveling at the vastness of the holy space.  As I had approached the altar, I felt I could even hear the remnants of past music, the whispers of past voices.  I saw motion to my right, and realized it was not the past leaving its prints, but rather the present, as the music was coming from a woman softly playing a song on the organ.

The whispers were those of courteous and reverent voices of other visitors in the second seating area behind the altar.  I was curious about the second set of pews behind the altars in some of the churches that I saw, and I learned later it was to separate the rich from the poor during services. 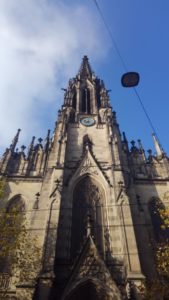 In Elizabethenkirche, musicians were playing a concert near the altar.  I entered the coffee shop in the back corner and ordered a latte, then sat at one of the two tables inside the corner of the church to enjoy a respite from my walk and appreciate the music.  In the opposite corner, there was a sign indicating one could climb up the winding staircase(s) to the tower, so I started up.  The staircase started winding tighter and tighter in the ascent, and at some point, my courage failed me and I decided I would rather not get wedged up there.  I had the image of myself stuck somewhere near the top and no one to hear my plaintive cries for help. Perhaps I just got scared of losing my footing on the slippery stairs, or maybe it was the fear of heights that stopped me.  At any rate, my heart was beating fast as I made my slow, careful descent.

Two mornings later, I was taking an early morning walk in Interlaken when I noticed a peculiar site in the distance; two churches of distinctly different architecture sharing the same skyline.  I walked past fancy hotels and through a 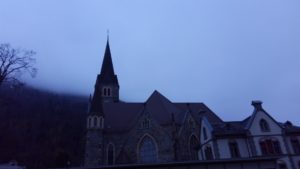 park to get over to that area to satisfy my curiosity. First, I came across what appeared to be an old monastery or convent attached to a Catholic church, plain and simple in details in the inside.  Next to it stood a Protestant church, the two having shared the skyline and property for hundreds of years in harmony.  The Schlosskirche, as this area is called, first housed 30 monks and then 300 nuns starting in the eleventh century.  Later, Reformation swept through Europe and the Protestant church was built.

Their harmonious dichotomy seemed in line with that in my heart, part skeptic and part saint.  The night before, I was stopped on the way to a bierhaus by a couple who asked me to participate in a survey on faith.  The first question had me rank how religious I was on a scale of 0-10.  I rated myself a 7, but then started to question this myself as the following questions dealt with my actual adherence to religious practices.  How regularly do you go to church?  How often do you read your Bible?  Have you ever committed these sins (list)?  Do you believe you will go to Heaven, and if so, (reflecting on these admissions of sins), why? 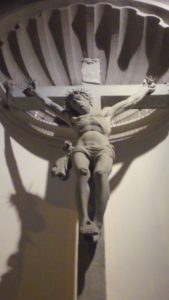 One of the questions dealt with how I viewed Jesus, and it was this thought, plus that of my cultural conditioning and spiritual upbringing, that I was contemplating on during my mental wandering in the Sunday Mass, perhaps seasoned with good old Catholic guilt.  Perhaps I had just viewed too much iconography during this week of exploring Switzerland.  I had answered that I thought of Jesus as a prophet, as a teacher, as the “Lamb of God”.  During the biblical age, lambs were brought into the temples as blood sacrifices, their bodies wasted as their throats were sliced open.  Jesus was not meek, though, in the spirit of lambs, but rather stood firm against the misrepresentations of faith.  He raged like a lion against the money changers in the temple, and refused to back down to the Pharisees.

Perhaps I had just been touched by the imagery of the Lion of Lucerne, a monument to the Swiss Guards killed in the French Revolution. 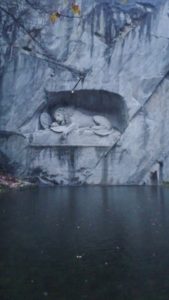 I had literally just come from the Lion Monument before the church service, and couldn’t help linking the spear in the lion’s side and the tears rolling down his cheek to the day of the Crucifixion. The conflicting feelings of lamb and lion I felt inside of me, my forgiveness towards those who sinned against me and yet anger at being treated badly, as well as the call to purity and to a sinful nature. I had on one hand the understanding that religion might just be a human construct to make peace with our own mortality, but on the other the feeling of faith in my heart that could not be quenched with reason and a guilt for not having been attending church on the regular.

All these thoughts and more stirred up inside me as the choir picked up, first a harmony of female voices to the left of me, then the deep bass of men’s voices on the right accompanying them, with a touch of organ or orchestra mixed it.  The music intensified my feelings, and I felt a single tear roll down my face, like the one carved into the Lion.  I wiped it off and it was time to leave, but the marks on my heart might stay behind.