Pilant Slough Trail.  Wheels turning on slightly damp fine gravel paths.  Watch out, I say to the little one, watch out for the rocks in the path.   Stay on one side of the trail, announce yourselves to the pedestrians, tread lightly, go quietly.

We step off the path for a moment.  Tiny ruby-crowned kinglet (#122) forages on upper branches.  We find things to marvel at; a big creepy bug, spider webs,  a little frog inside a split log, ammo cans with fun swag.  Forest opens up into a clearing, grass and weeds about waist high.  Eventually we cross a bridge and then we are approaching the wide path that loops around Elm Lake. 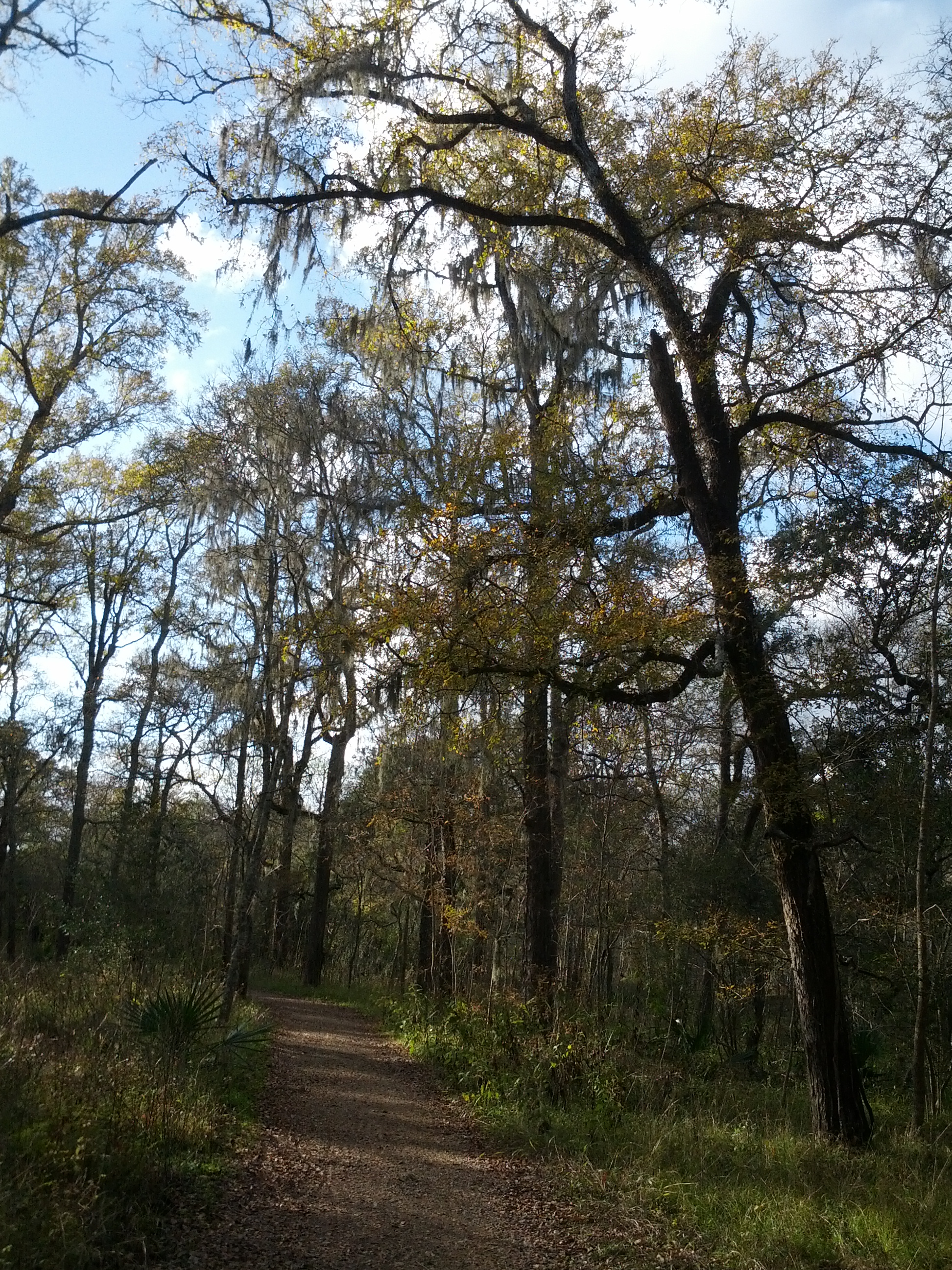 Along the islands in the middle of Elm Lake, gators are stretched out like old tires across the landscape.  People are out walking slowly along the path, stopping to point or take pictures of those ever-present mascots of this park.  Great flocks of black bellied whistling ducks make a racket along the shoreline next to them.  Common moorhens are standing in the water feeding.  American Coots are moving in between the islands.  A Pied-billed Grebe or two (#123) ducks its head into the water as we approach. 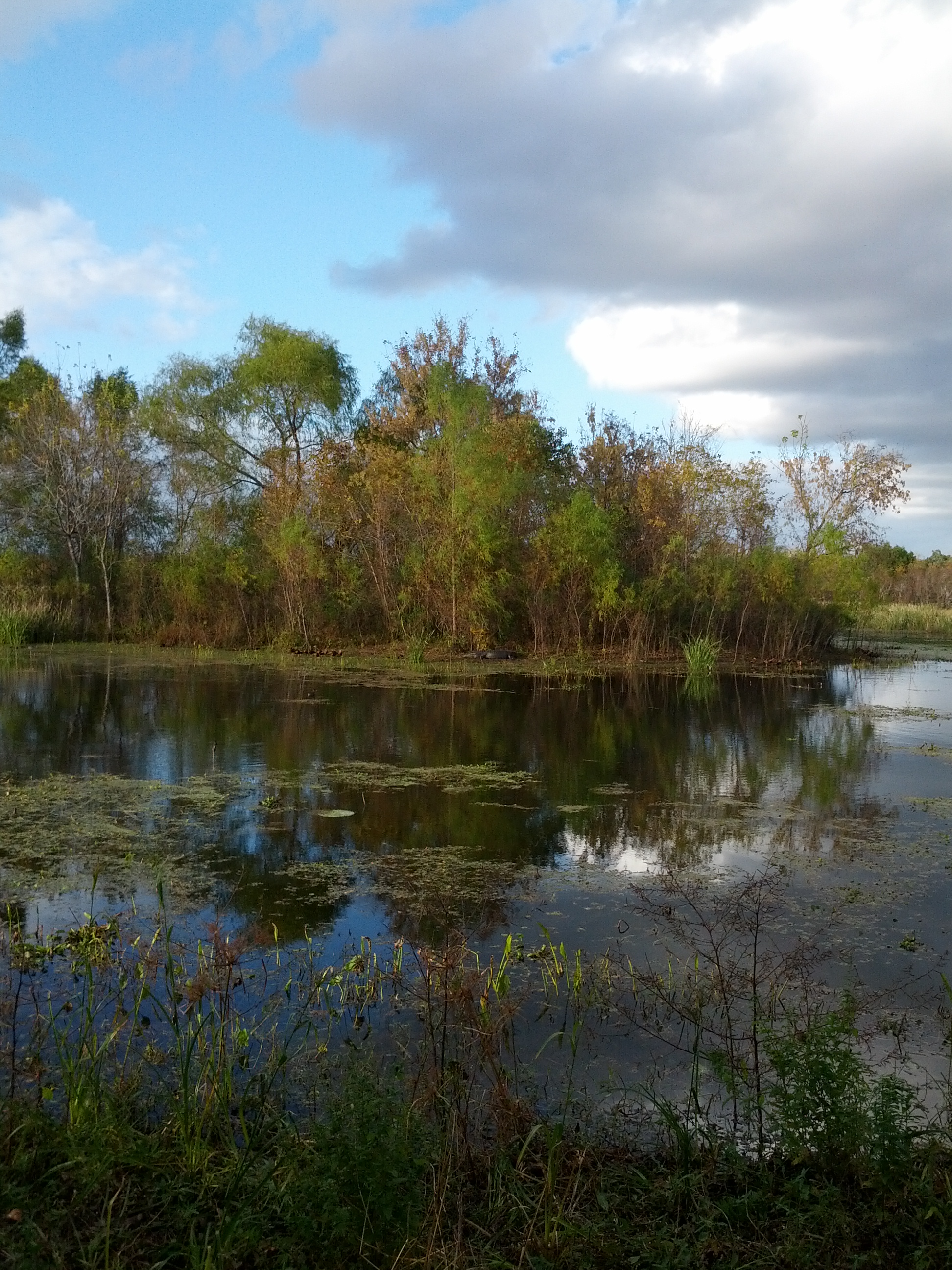 We make our way all around the lake.  The little one, who really isn’t all that little anymore, starts pretending like his legs were going to come off from so much pedaling.  How much further, he asks.  We’re almost there.  Around the parking lot, just around this watchtower, just past this bridge, just around this corner, and then we are climbing a small hill ascending to the Nature Center, where we left our car.  He is just dying, so we slow down, walk, park our bikes and go inside to see snakes and pet the baby alligators.

On the way home, we stop at the stop sign to the main road home.  A line of bikers are trying to turn left to go towards the park, and we aren’t in a particular hurry.  Jason is trying to get a visual on the red bird in the bushes, a Scarlet Tanager (#124).

In the end, it was less than three miles by bike, but felt like forever for an eight year old who needs more bike rides.  On the way home, still feeling adventurous, we try a new asian fusion place near our house, which suddenly is everyone’s favorite.  Maybe we can go again next weekend; for a ride, to the park, to Akashi.  This was the sweet spot for our holiday weekend.

Last night, I found out where the good ducks go when the sun goes down. 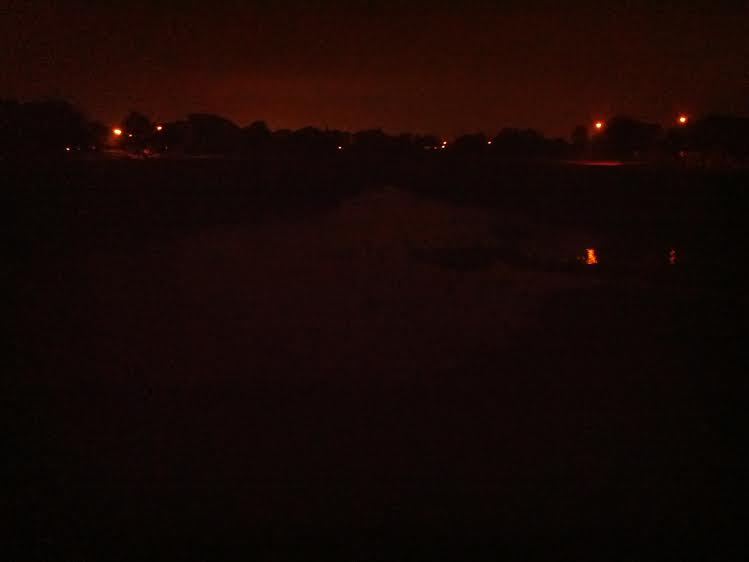 It was late, almost time for bed, when we got on the bikes and made for mysterious tunnels, winding moonlit trails tracing the creeks, and wide, never-ending circles around the lake.

We got lost a few times, but we eventually figured our way home after more than ten miles and and an hour had gone.

About twenty minutes into it, we found the secret sacred spot of ducky delight.  There were over a hundred or so dark shapes moving around, the pitch of their voice suggesting black bellied whistling ducks.  A few larger pale shapes wandered around near the middle of them by the edge of an isle, and I rather think these might have been my roseatte spoonbills from earlier in the week.  This spot was not too far from the other, if you are the flying type. 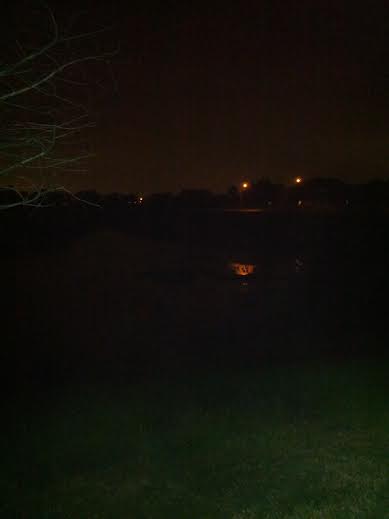 Phone camera is not great for this sort of moonlight meeting, gonna try to find this spot again during the daylight armed with a decent camera and see what turns up.

Lately I’ve been reading about hunting, to explore this new interest my son has.  Something struck me that I never really thought about before; just like how in birding it is not enough to just know how to identify your species but one should also know its habits, hunting is more than just aiming a weapon at an animal and taking it down.  I was aware that stalking and hiding was important in the hunting paradigm, but it is the observation of the relationship between the animal and its environment that is critical in being efficient in the hunt.  You have to know where and when that animal might head to water, or what and when it eats, how it spends its day, what its mating rituals are like.   Knowing these things about deer, for instance, might reduce the amount of time a hunter has to sit in a stand waiting for that big buck to stroll along.

This thought process helped me realize that although I might be an animal behaviorist by trade, many people are animal behaviorists in their own right.  If we just counted just the hunters and birders, that would be about 60 million people in the US, according to the USFWS National Survey.  That many people become special experts in the wild animals they are trying to track down, observe, and capture with a camera or a gun.

I was curious about the migratory habits and changes in animal population from season to season and year to year around my own little area.  I decided to do a little behavior observation via bicycle and make some notes that I will then compare season to season or year to year.  Like a hunter who goes to visit his deer lease ahead of hunting season to get a feel for how the animals utilize their land, I wanted to see if I could get a feel for what the habits were of the wild birds here near Seven Meadows and Cinco Ranch.

This is what we observed at our different stops along a nine mile local bike route:

The other night, we were watching Cosmos and Neil deGrasse Tyson was talking about early humans, how they learned to match the weather and star patterns to the migratory patterns of animals to help them be more successful in the hunt.  That is what I am trying to do, only the intention of my hunt is simple knowledge.