So, I described our trip to Mono Lake a few posts back.  This visit, the summer of 2012, was actually my second trip to this area.  During the first trip, I took the following pictures that demonstrate the towers of tufa coming out of the water, as well as the islands in the middle.  These are unique geological features that became part of the language of the struggle to keep Mono Lake alive in an environmental drama that played out in the California court system in the 1970s.  I was reading more about that story in a travel guide to California that I recently acquired, and wanted to share with you more of the story. 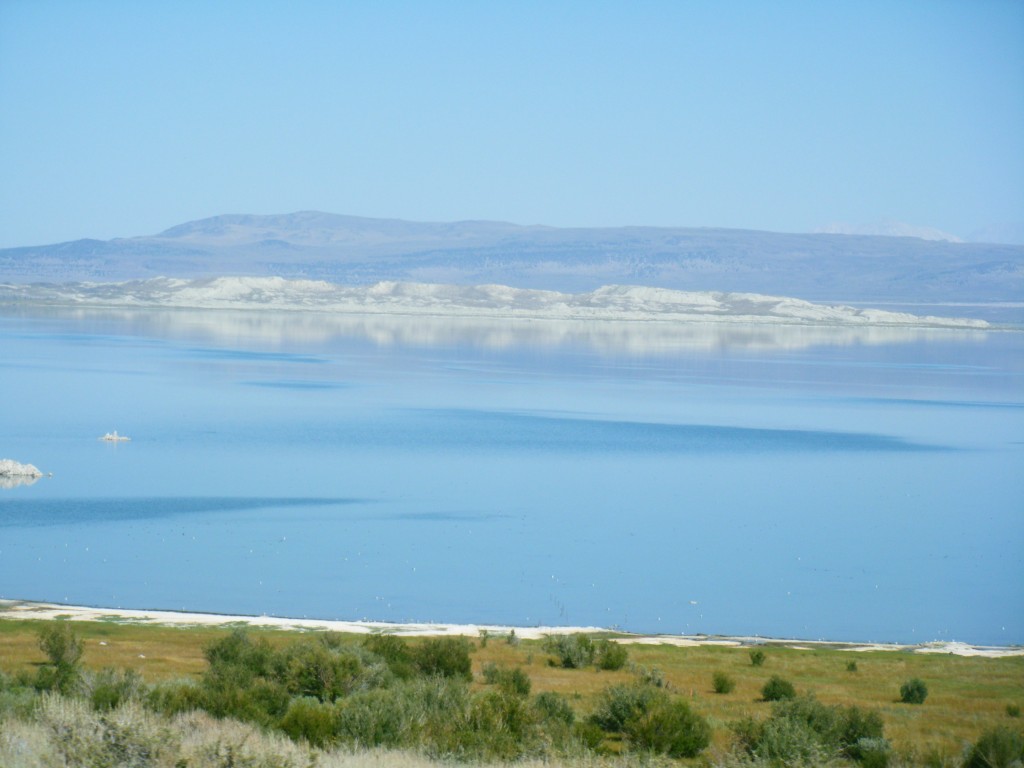 In the 1940s, the city of Los Angeles began diverting water from Mono Lake to supply the city with.  This was made possible by a feat of engineering that involved tunneling through the Mono Craters, which were an active volcano field.  This water diversion was to supplement, or replace, the water obtained from the Owens River Valley area.

There is a long, complicated story involving shady deals with investors who were selling or buying property and water rights for unreasonably cheap prices to gain profit and benefit Los Angeles by stripping the Owens Valley of its former status as a fertile agricultural area, and rob Owens Lake and river of its water supply in the process.  This process had been occurring in the early years of the twentieth century.  By this time, the Owens Lake had become a dust bowl, and the supply of brine shrimp that formerly lived in its waters had disappeared, along with the birds that fed on them. There was a stand-off for water rights between the local farmers of the area and the city investors that finally culminated in a dynamite explosion at a gate to the aqueduct.  Soon after,a shut-down of the town bank  left the ranchers high and dry, literally; their water sources shriveled up and their life savings disappearing.  The town became a ghost-town as businesses shuttered their doors, and those who stayed may have found themselves now working for the other side, doing repair and  maintenance for the aqueduct.  That was in 1927, and after much court doings and goings on between this county (Inyo) and the city of Los Angeles, the water was finally allowed to flow back down the river bed at the end of 2006.  However, groundwater continues to be pumped out at a rate higher than what can be recharged, leading to long term desertification of this area.

This is the situation Mono Lake became in danger of repeating, as the city of Los Angeles turned to the Mono Basin for water instead.  By the 1980s, 17% of the water supply of the city was coming from this area.  The level of Mono Lake dropped by half, and as the water level dropped, the salinity increased.  This lake, like Owens Lake, was populated with brine shrimp. Algae in the water provided food for the shrimp, that in turn, fed the birds – mostly gulls.  As the lake level dropped, the islands in the middle now became peninsulas, and predators gained access now to the areas where the birds (e.i. California Gulls) kept their nests.  Eggs and young were killed, and the diminishing food supply as well was affecting the bird population. 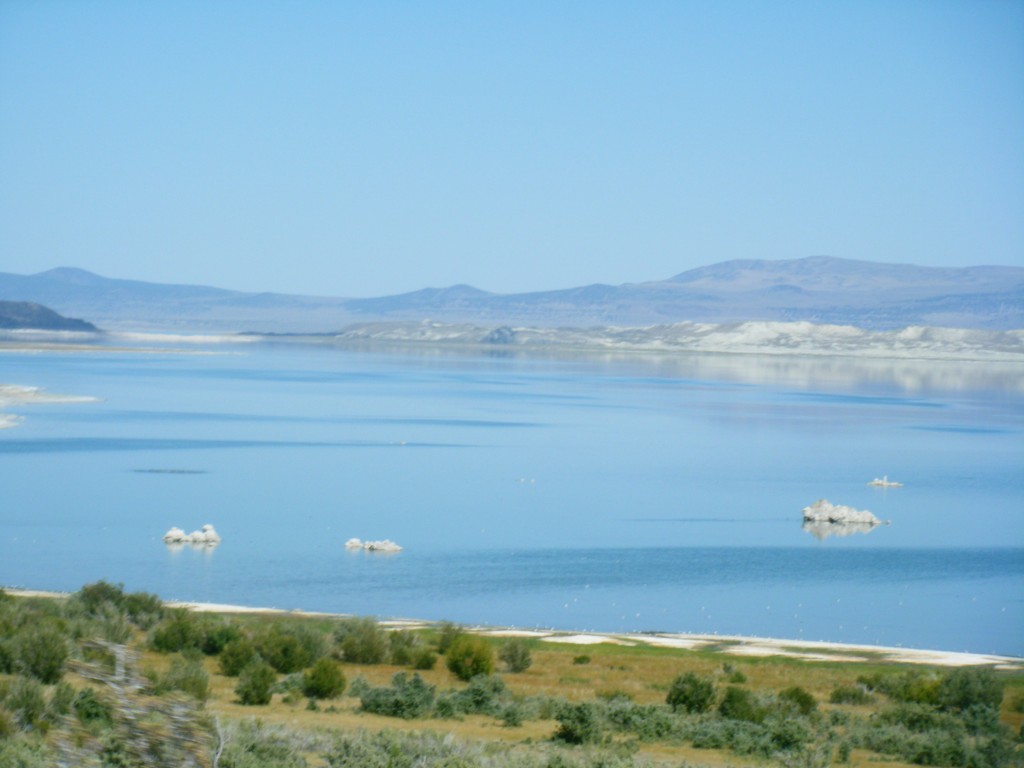 Fortunately, the changes in the lake were not going unnoticed or unchecked.  In 1978, the Mono Lake Committee was formed to protect Mono Lake.  The group eventually sued the Los Angeles Department of Water and Power to protect the lake, and lobbied the California legislature, which then passed a bill funding a scientific study to determine the environmental effects of the water diversion.  Specifically, the aims of the study were to find out of the lake would dry up to the point that the invertebrates and algae in the lake would die out, and nesting and migratory birds would no longer be able to use the area. 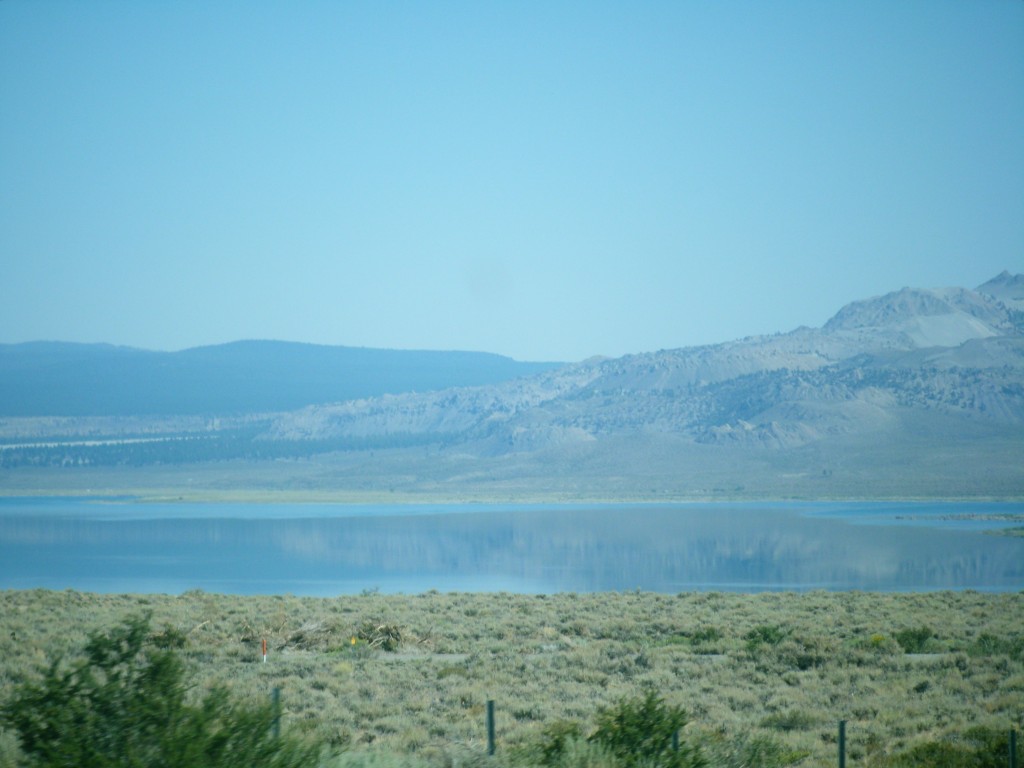 The scientists who conducted the study took a unique approach to their work, which resulted in a different kind of report finding.  The first task was to hire an oceanographic mapping company to measure the depth of the lake.  They worked with a consulting scientist to develop a computer model of the rates of evaporation from the lake.  Then they worked to discover at what water level was detriment to the ecosystem within it going to occur.  Then they presented three options to the public: the level at which no change would occur, a second level that kept aquatic species going but sacrificed some level of bird nesting habitat and scenic qualities, and a third level which would cause death to all the lake’s life.

This report, with the three options, was taken up to the court – the same court that earlier had decided to uphold the right of the LAPWD to divert 100% of the stream flow that led into the lake unless environmental damage could be measured.  This time, the court reversed its previous decision based on the findings of the report. The judge ruled that the city could not divert any of the water until the level of the lake was above the first level, the one at which no damage would be incurred. Today, twenty four years after this decision, the lake has still not reached this level, and for now, Mono Lake and its waters belong to the wild, and not to man.

This success story can be used as a model on how to balance the needs of the people against the environment, and needs of non-human animals.