I visited this nature sanctuary location for the second time today.  We wanted to go check on a geocache we hid in there together about sixteen months ago.  When we hid our cache, it was the only one in this little wooded oasis of 17.5 acres in West Houston, in the Memorial area.  Now there are three more, and we found those other three today while out 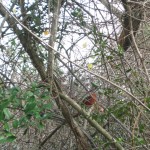 We also brought our new field guide for birds, and tried to identify the ones we saw.  Even though our field manual (National Wildlife Federation’s “Field Guide to Birds of North America”, 2008 version) is broken up into bird family sections and has great pictures, it is hard to use it to identify on the fly.  I was trying to flip through quickly to find the one we had in the sights with the binoculars.

We spent about an hour or two walking around out there, looking down for caches and up for birds.  On the way out, we picked up some literature at the cabin, some that had upcoming events on it and one that listed the common birds found at the park.  This last one helped confirm some of our sightings. 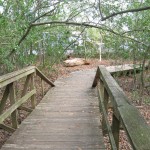 Species seen at park today:  Blue Jay, Northern Cardinal, Tufted Titmouse, Carolina Chickadee.  Possibly Inca or Mourning Doves, since that is what the sheet lists as residents of the sanctuary, although both J and I feel, after comparing our field guide pictures to what we saw, that the doves we saw by our geocache were Eurasian Collared Doves.

The trail that leads to our particular cache was actually closed, although the trails leading to the other three are actively open.  This trail, and pretty much the whole back part of the park, is closed mainly due to dead trees from this year’s drought.

This history of this little nature sanctuary is interesting.  The property was purchased in 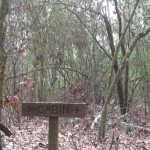 1926 by Edith Moore and her husband.  They hand built the cabin and structures on the property, and raised pigs there.  When Edith, now a widow, was close to the end of her life in 1974, she did not want the family farm to be swallowed by the city, as everything else around had been.  So she willed the property to the Aubodon Society, with the promise that they would retain the original structures and allow nature to live freely there.

More information on the Houston Aubodon, special programs, and the sanctuary can be found here:  http://www.houstonaudubon.org