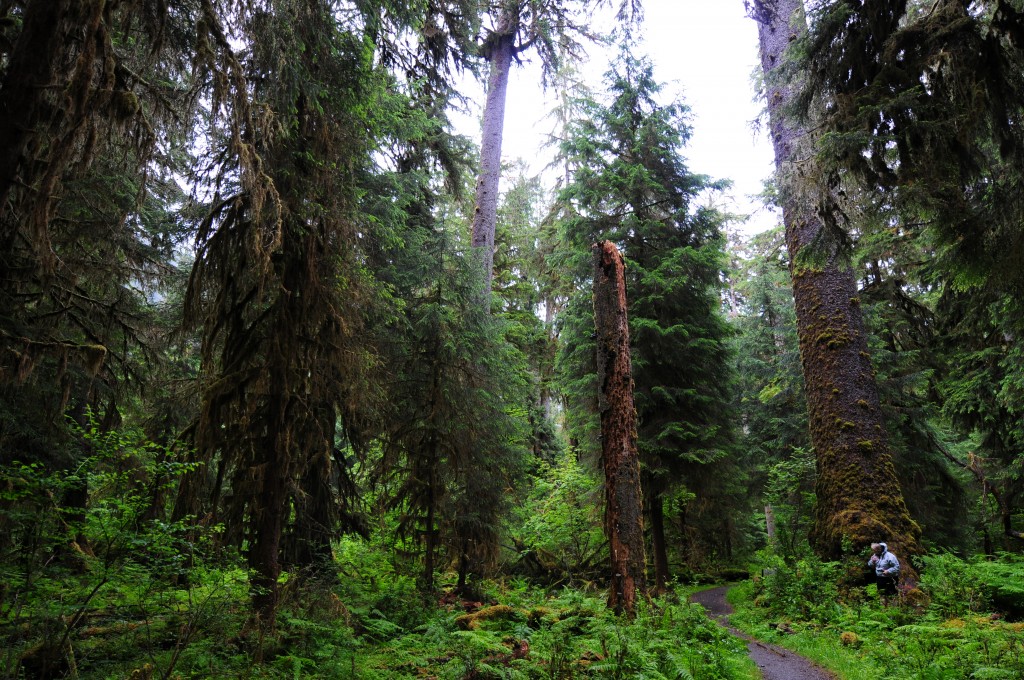 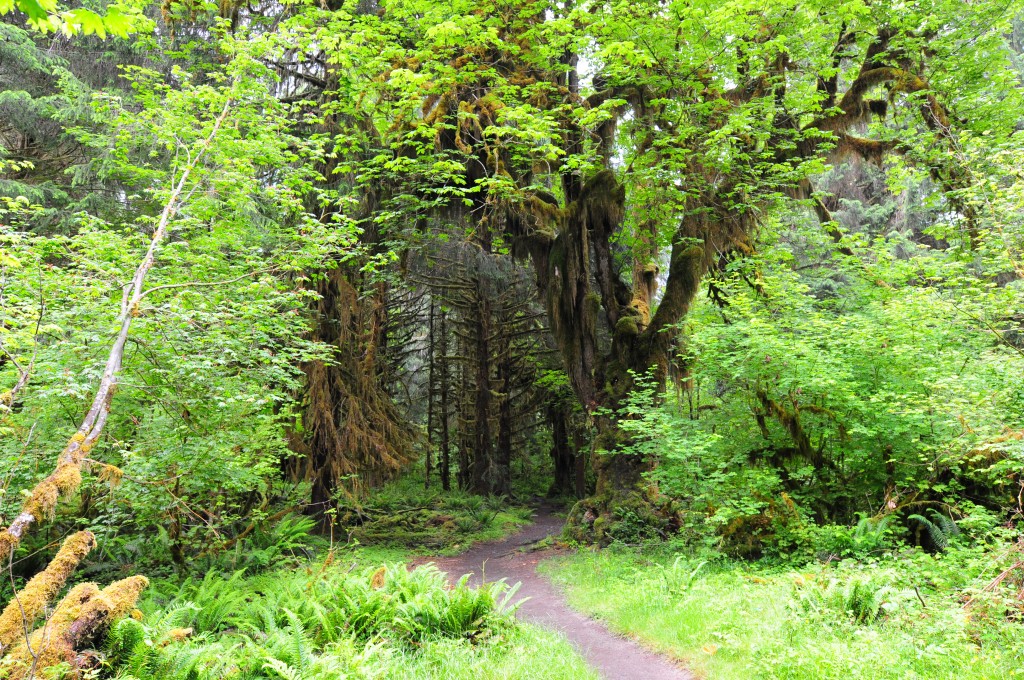 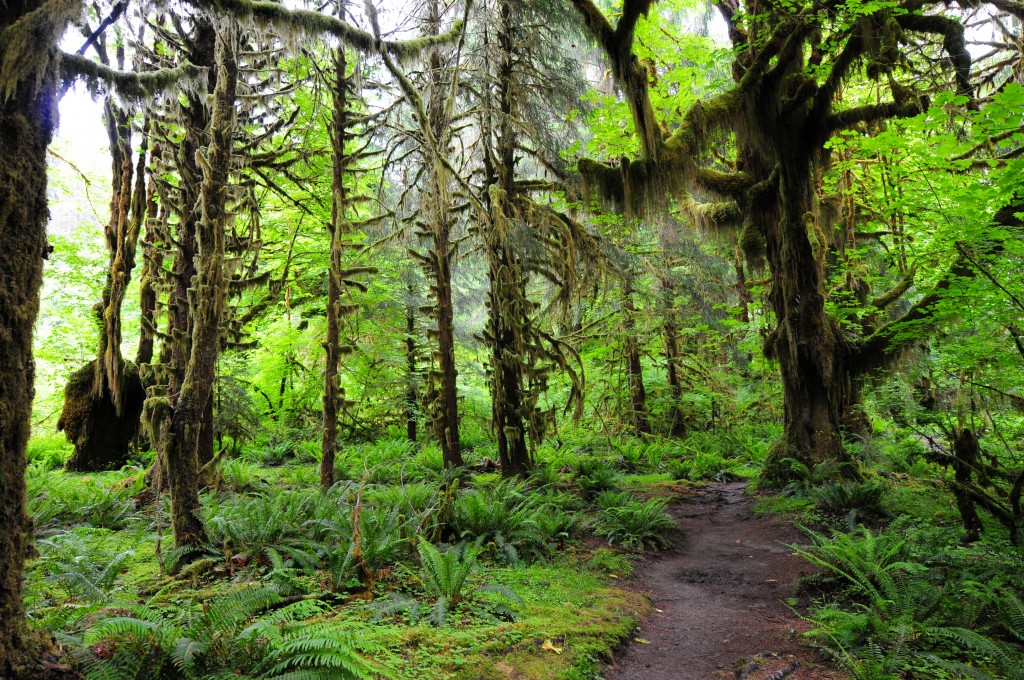 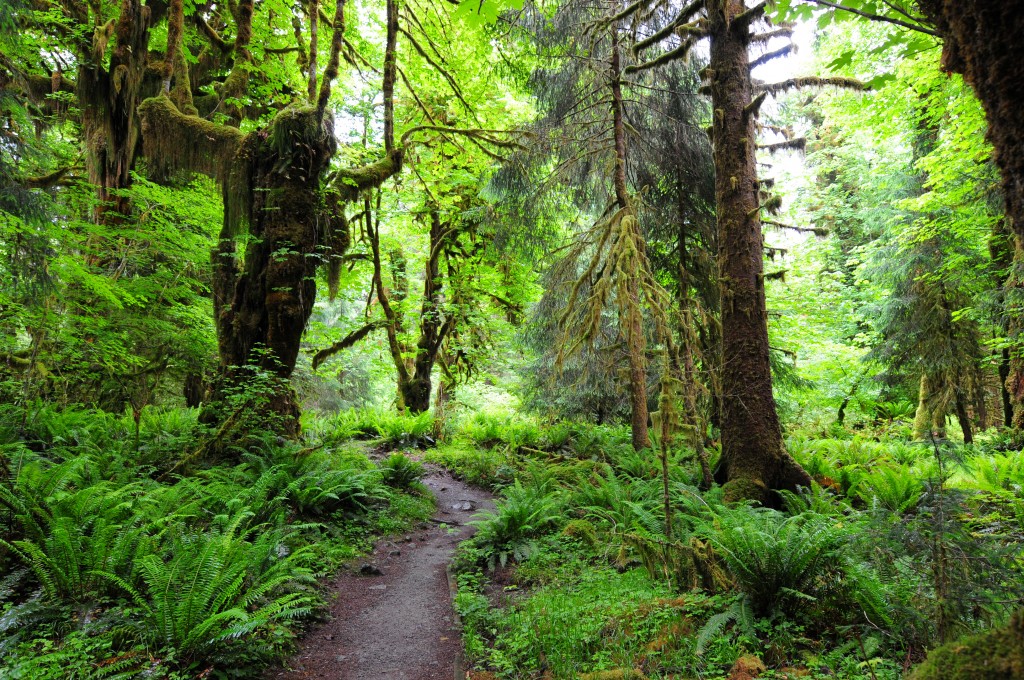 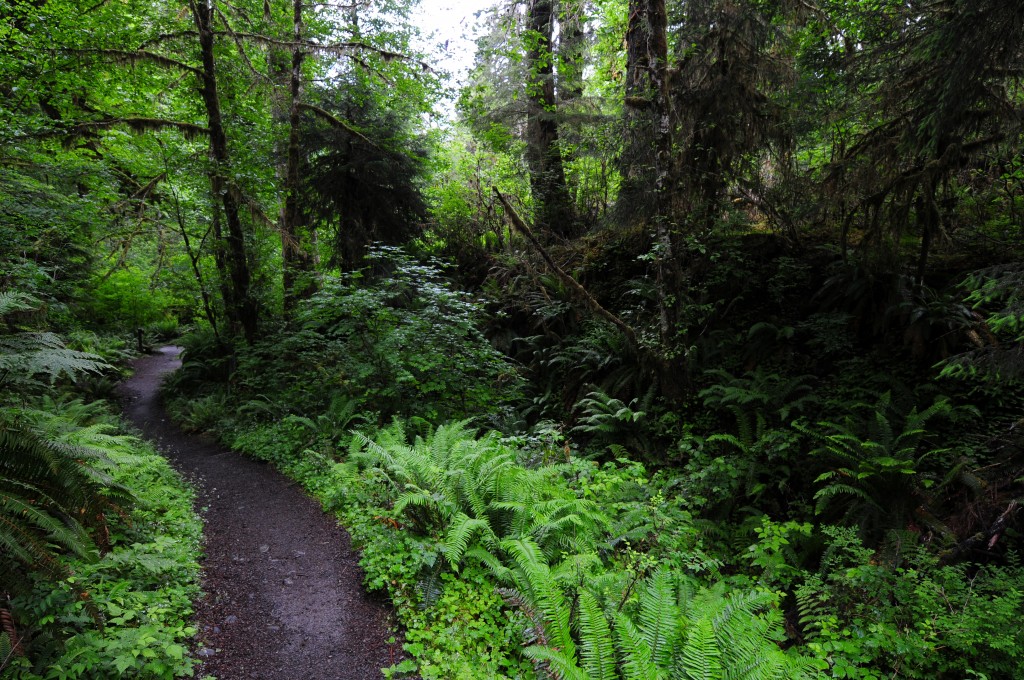 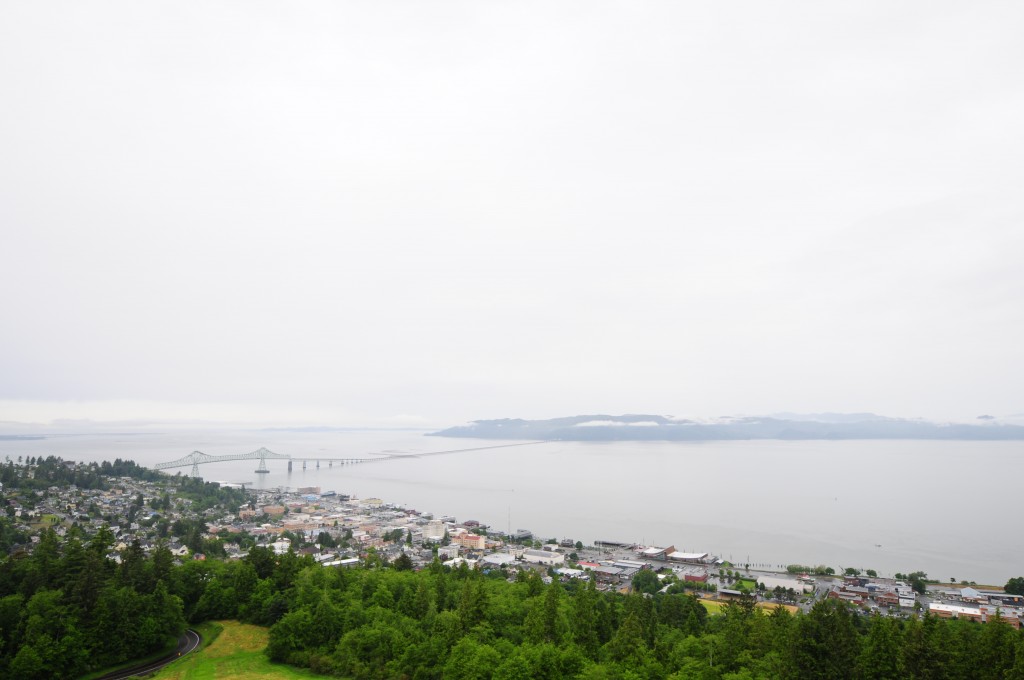 When we left Nehalem, we headed north along 101 towards Washington. We stopped for breakfast in Seaside, Oregon at a place called Pig N Pancake, which turned out to be quite good. Seaside would be an interesting place to come back to when it is not drizzly and wet outside.
We were trying to make time and weren’t stopping a whole lot, and the weather was fueling some of that. We were unable to resist the temptation to stop for the Astoria Column, however. These pictures were taken from the top. It is something like 164 steps to get to the top of this 125 foot tall structure that sits 600 feet above sea level. The column had some interesting murals of the past along it, although I was struck at how unfair it seemed to the Native Americans, painting the white settlers as the heroes. Lewis and Clark stand as the mythical heroes of the Pacific Northwest, gold is glorified, inventions and settlements are claimed as heritage, while the early inhabitants were pushed aside onto reservations of land worthless to grow anything on. I suppose that to the victor go the spoils. 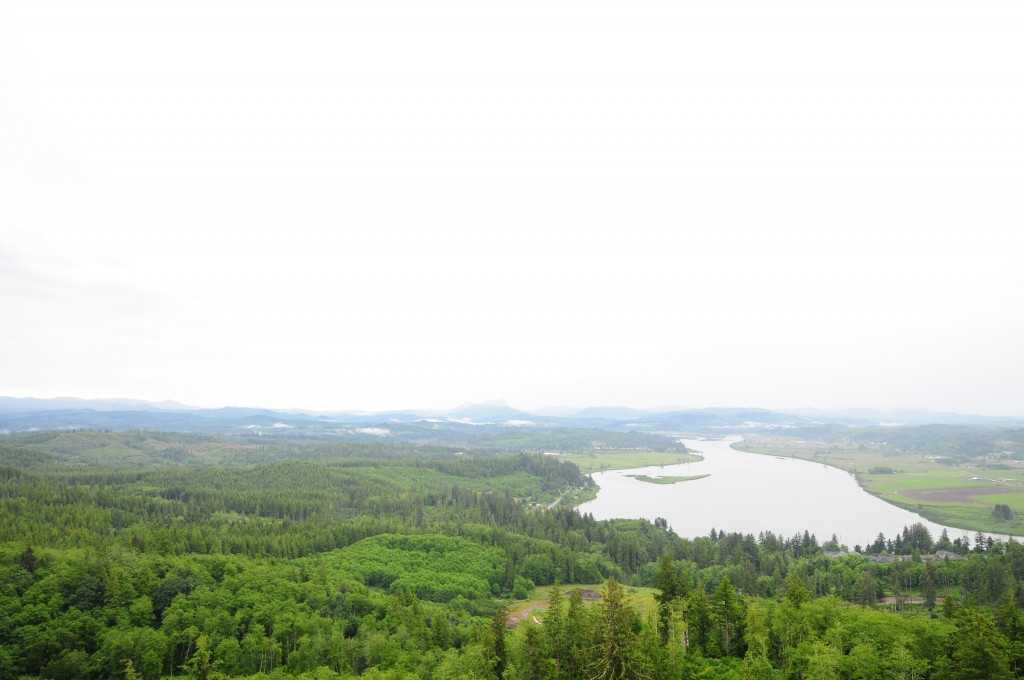 We also met this wild animal on the way back down from the column. It did not seem concerned by us at all. 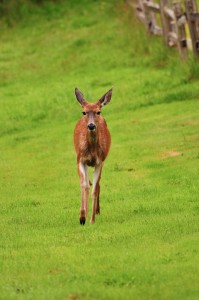 I felt like we were headed off to the end of the world, by looking at that first scene. But no, just to Washington. More to come on that. 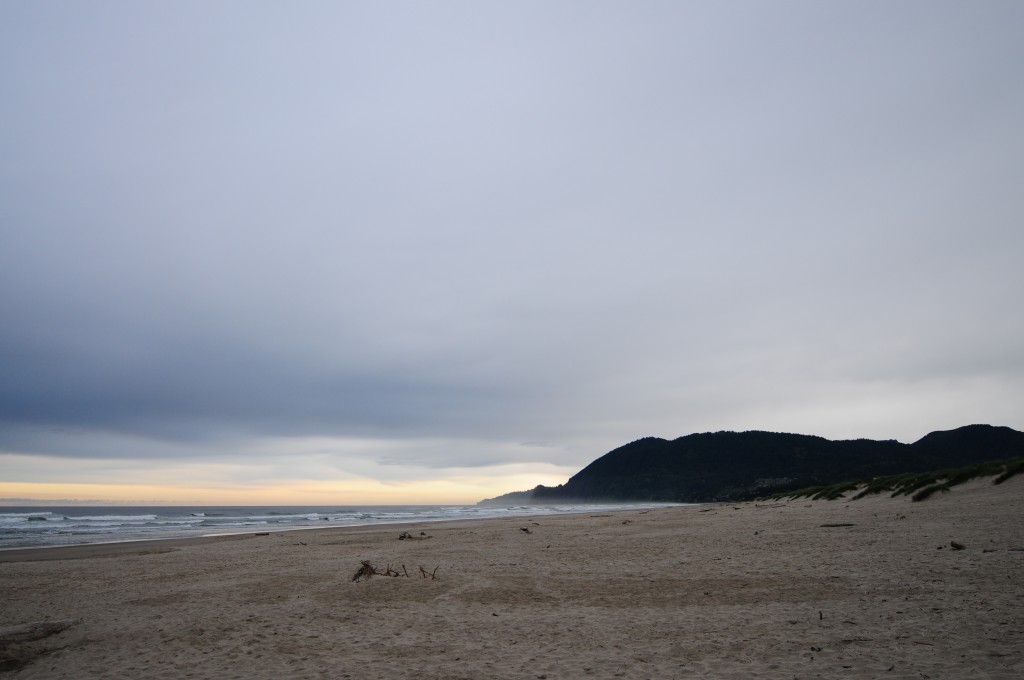 Scenes from our early walk down to the beach at Nehalem Bay State Park. 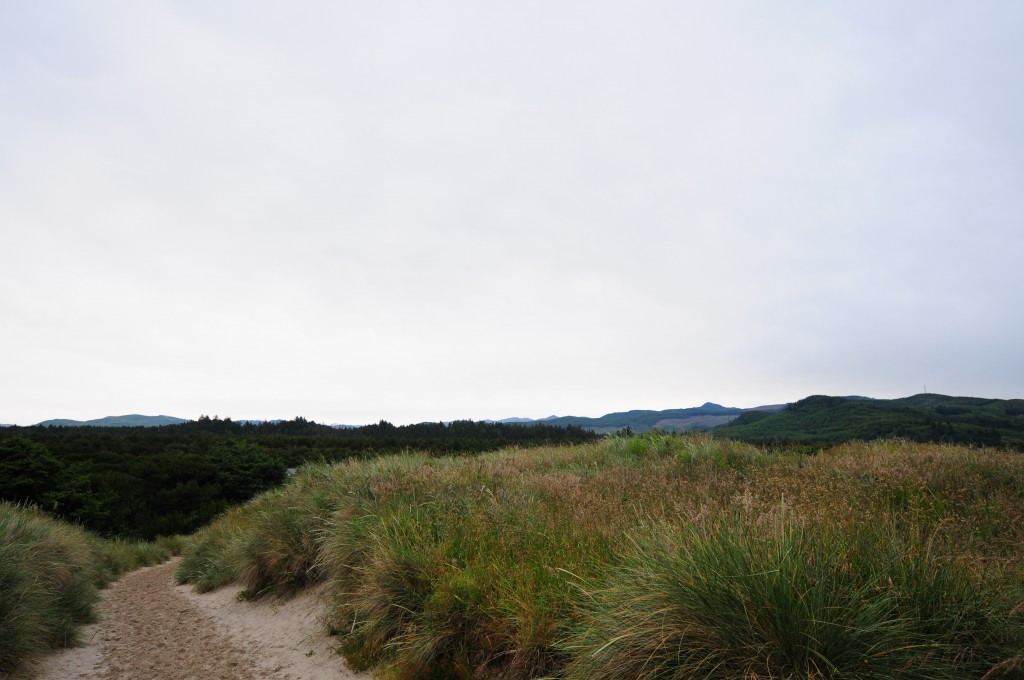 The tent camping at this park is ho-hum (lots of people around and nothing too terribly special or secluded about the campsites), but the yurts look awesome. We reserved too late to get a yurt, they were all full up. You can also camp with your horse here, if you are lucky enough to be able to do such things. The park has a 1.75 mile walking trail and recreational activities also include crabbing and fishing. It’s just about 15 minutes or so from Oswald West State Park, whose campsites have been closed since 2009, and where there are some great hiking opportunities. 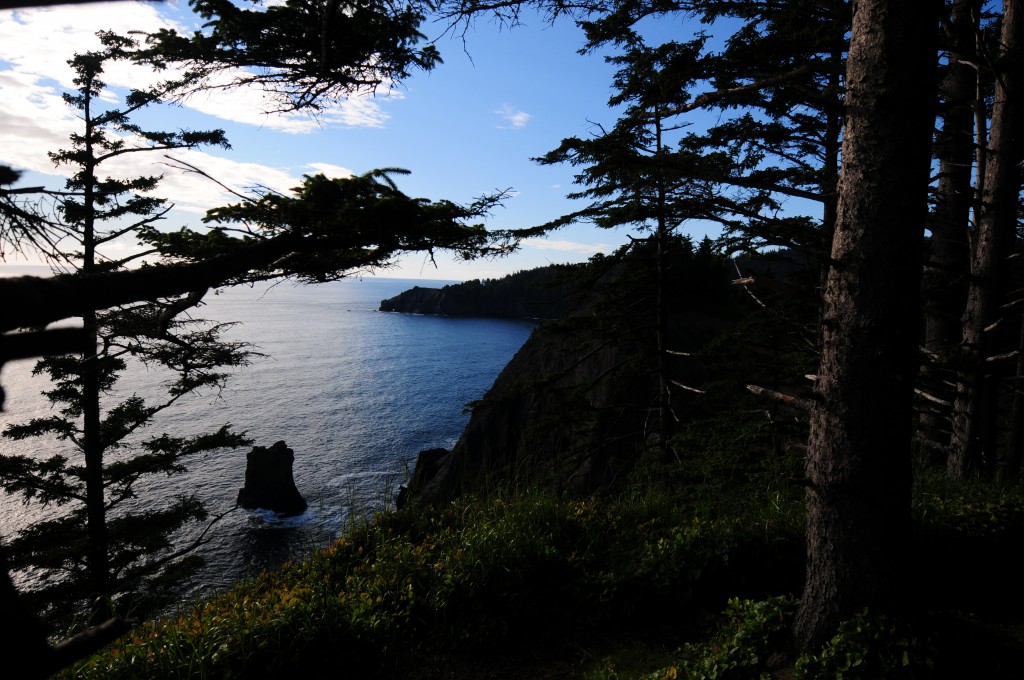 So this is one of the best places ever.

We never would have gone to this place, either, if it hadn’t have been for Facebook. Both of us “like” National Geographic on FB, and they post a Picture of the Day. One day, the photo captivated both of us, and we were like, we should go here! So I looked it up, and figured out how we could make that happen on this trip.
We tried to guess as to where the exact spot was where they took the photo but I am not sure we figured it out. Maybe this was it: 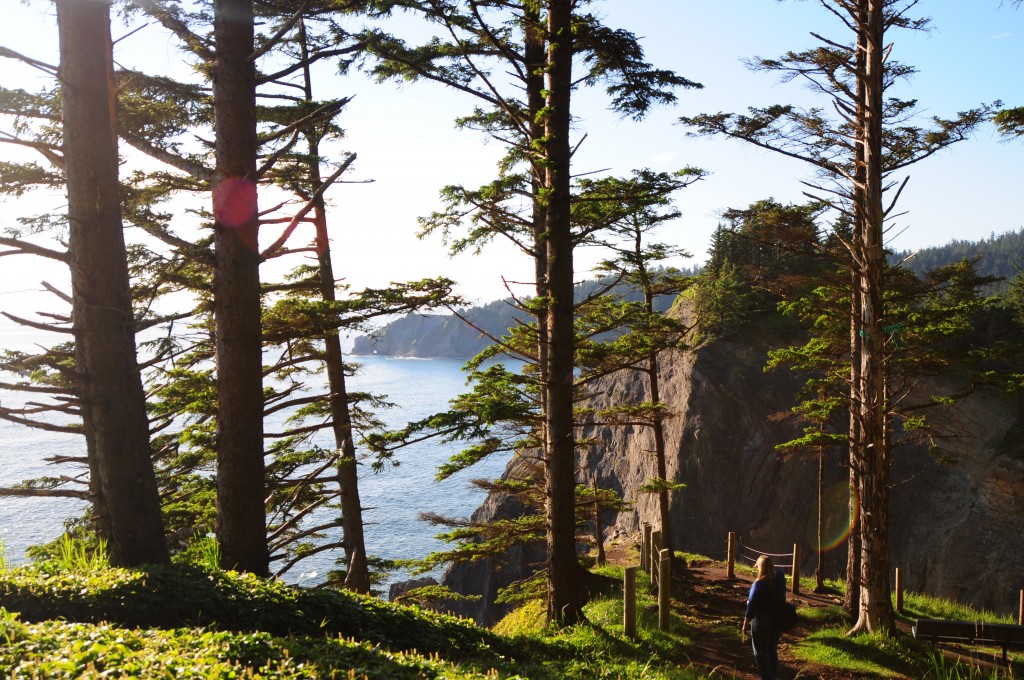 Or slightly south of this along the trail, I dunno. What I do know is that there ARE in fact bald eagles here, I saw one fly over my head while J was taking a photo of what we think was an immature one being harassed by a seagull. I was also watching for whales here, they say this is a good spot for that, although I think it may have been the wrong season.
We couldn’t decide what to do first. We started on one trail, but it seemed to be harder than we anticipated, so we went back to this spot here and tooled around for a while. Then, we drove up the road, and found a place to start on the same trail we originally started on, but from the other direction. This one went up Neahkahnie Mountain, and I was not in the mood for going all the way to the top. I thought we were going to turn around after the first cache in the series on the way up, but J kept pushing me to continue to the next, and then, turns out, I was the one who wanted to make it all the way to the summit (which was just right up there!) and he thought it was too dangerous, making us turn around right before the very last cache, after all that! And, we didn’t bother trying to look for the lost Spanish treasure up there, being too busy finding pieces of paper in decon containers to sign our names to.
Here is the view of the summit, the last 160 ft of it he didn’t think we should go up: 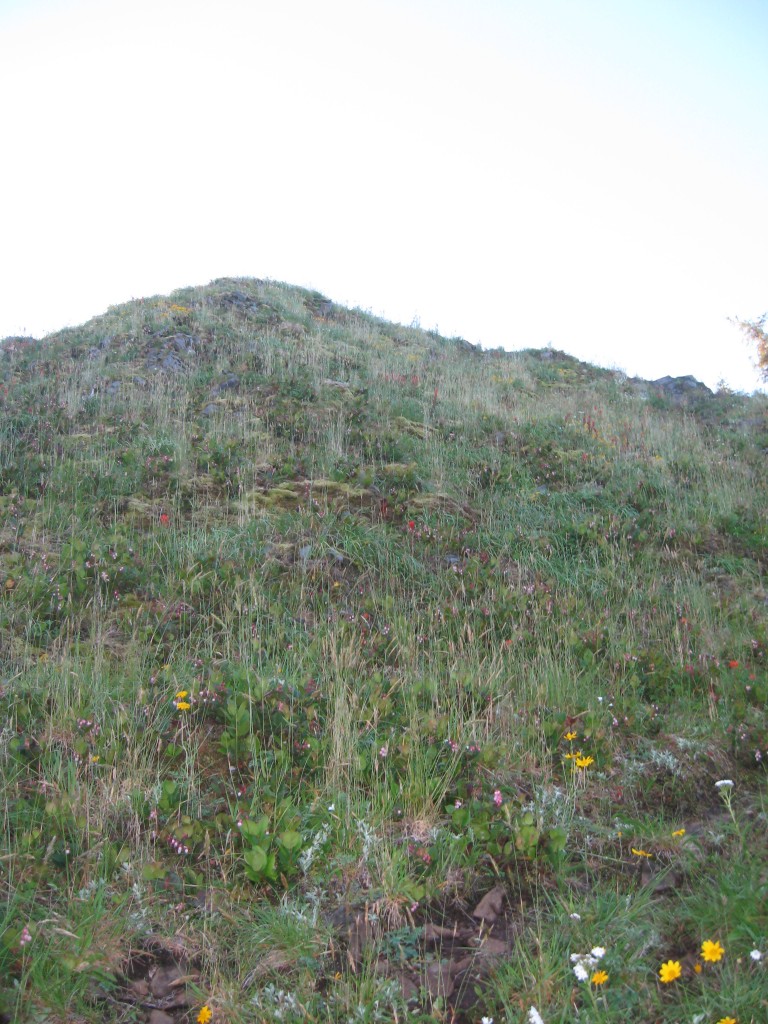 It’s a good thing, though, because what you can’t see from this image is that it was really rocky and kind of rough along the trail near the top, and that it was starting to get dark. It took us like an hour to get to the top, but it only took us thirty minutes to get down, or something like that. The sun was going down and it was getting dark just as we reached our parking spot. Here is the view going down the trail. This also could have been where the NG photo was taken: 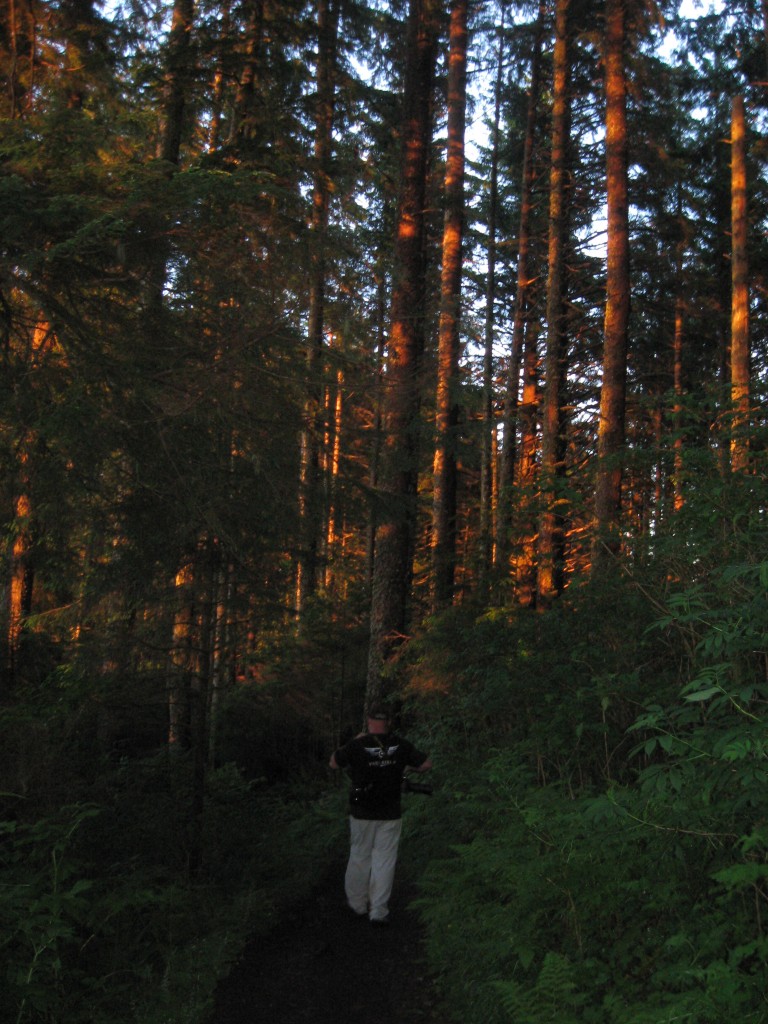 And a view from halfway up the trail: 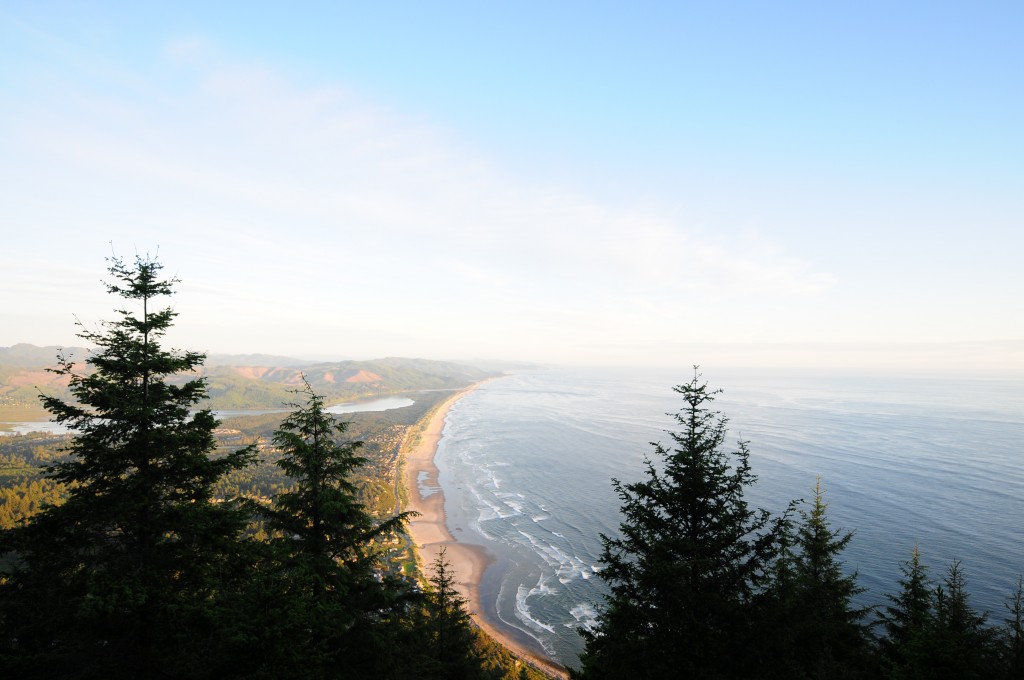 There are a lot of trails here worth hiking. After this, we tooled around as the sun went down, and then headed over to this Great Northern Garlic Company. It is fantastic. If you are ever in the area, you really should go there. It was after closing time, but the owner didn’t mind us huddling up around one of the table fires and ordering her last Dungeness crab, as well as two Crater Lake root beers and a plate of hummus and pita bread. It was so delicious, especially after that hike.
After this, we went back to our tent at the Nehalem Bay State Park (no camping in Oswald West), and went to to sleep with the faint sound of coyotes yipping and surf breaking along the beach that was further away than it sounded, but not too far for us to stroll down there at dawn and watch the Oregon coast greet the day. This whole area was the highlight of the trip, for sure.
Another view from the top of the trail, on the way down: 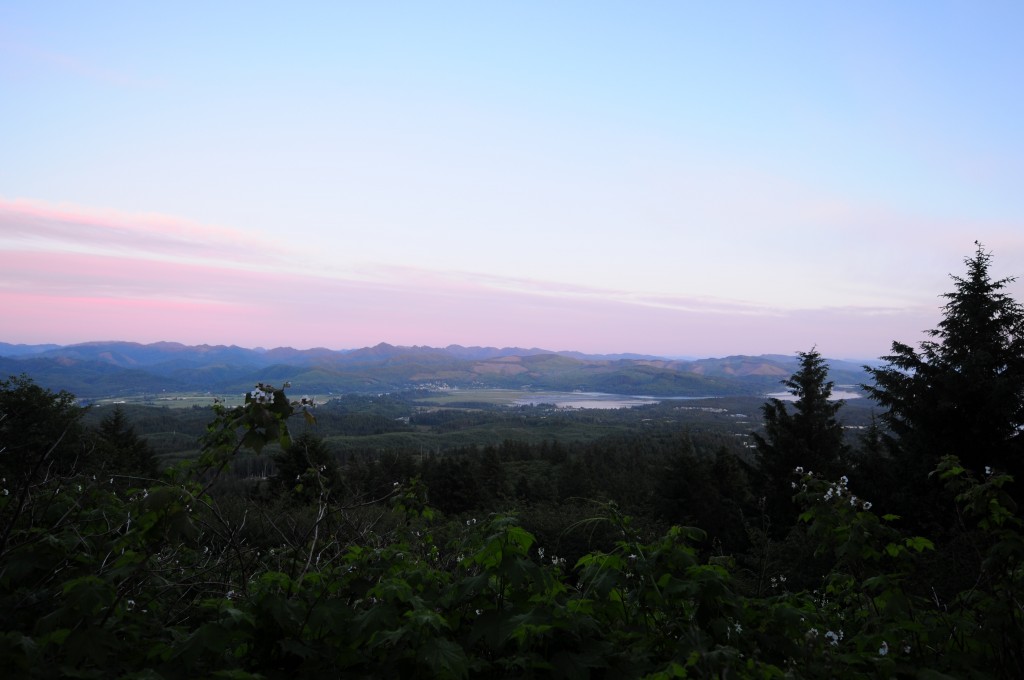