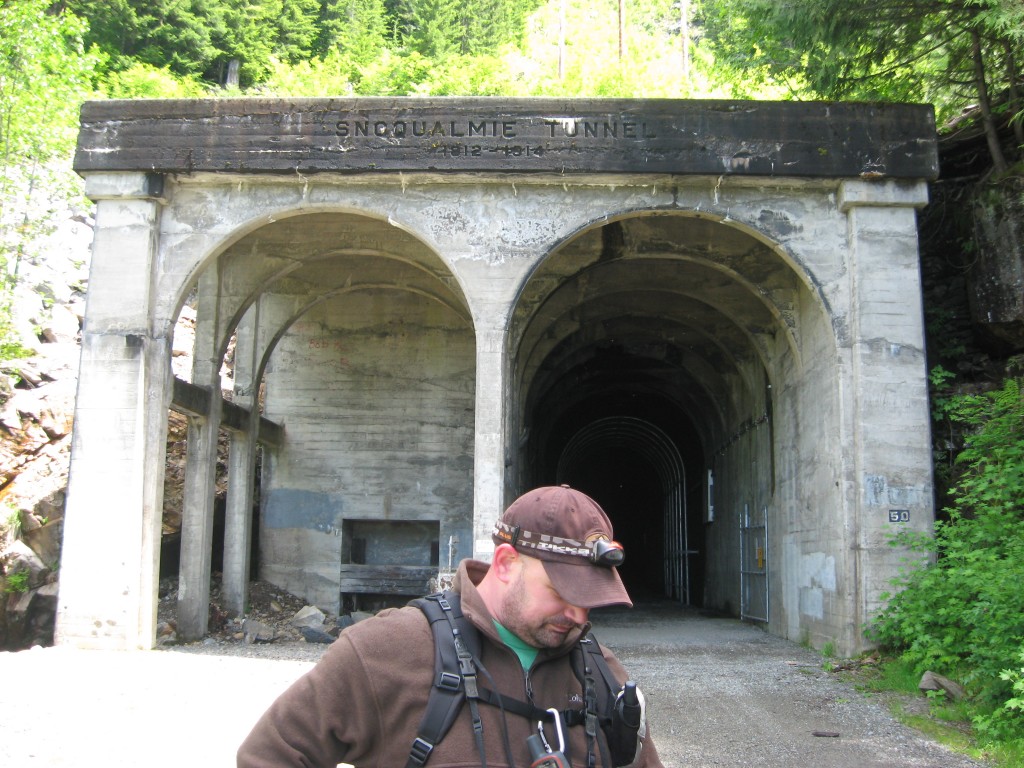 After our disheartening defeat at GCD, we drove across the highway and found the parking area for our next quest: to travel through the Snoqualmie Tunnel to the other side to get another grandfather cache, one called “IronHorse”.
Jason had already found this cache, but I had not. Both of us had been to this area before. Many, many geocachers have. This area was a mecca for geocaching, due to it being a common route to the last remaining APE cache in the US, which sadly was archived in the previous year due to it being muggled repeatedly by that geo-pirate I mentioned in the last post. Jason claimed a find on the APE cache in 2005 when he was sent to the Seattle area for business. I found the APE cache myself in 2008 when I was up in the area for a work interview, and was considering moving up this way (still would love to do that). Both of us had taken the other approach to that famed cache – going up the Lake Annette trail, which was beautiful.
There was a typical traditional hide now in the spot the APE cache formerly laid, but neither of us had our sights on that today. He wanted to share the experience of the tunnel with me, help me find IronHorse, and also we wanted to find a cache hidden inside the middle of the tunnel called “Bloody Fingers, Dirty Diapers”.
As we approached the entrance to the tunnel, we were joined along the path by an unlikely trio: a man leading a horse, and a dog following alongside. It soon became clear that the trip intended to walk through the tunnel with us. I found that kind of amazing, because I don’t know many horses that would willingly walk through this tunnel. I don’t even know that every person I know would be willing to go through the tunnel. It is kind of creepy! Basically, it is an old abandoned railroad tunnel that was converted to a hike and bike trail, with no embellishments. There is no light in the tunnel. It goes on for two miles. After you get about a half mile in, the light from the entrance behind you starts to dim, and it grows progressively darker, until it is pitch black. Eventually, you can make out a tiny speck of light ahead. If you walk towards that light, it grows a little bigger, eventually looking a bit like a church window in the distance. Eventually, that church window widens in your view until you realize it is the exit. 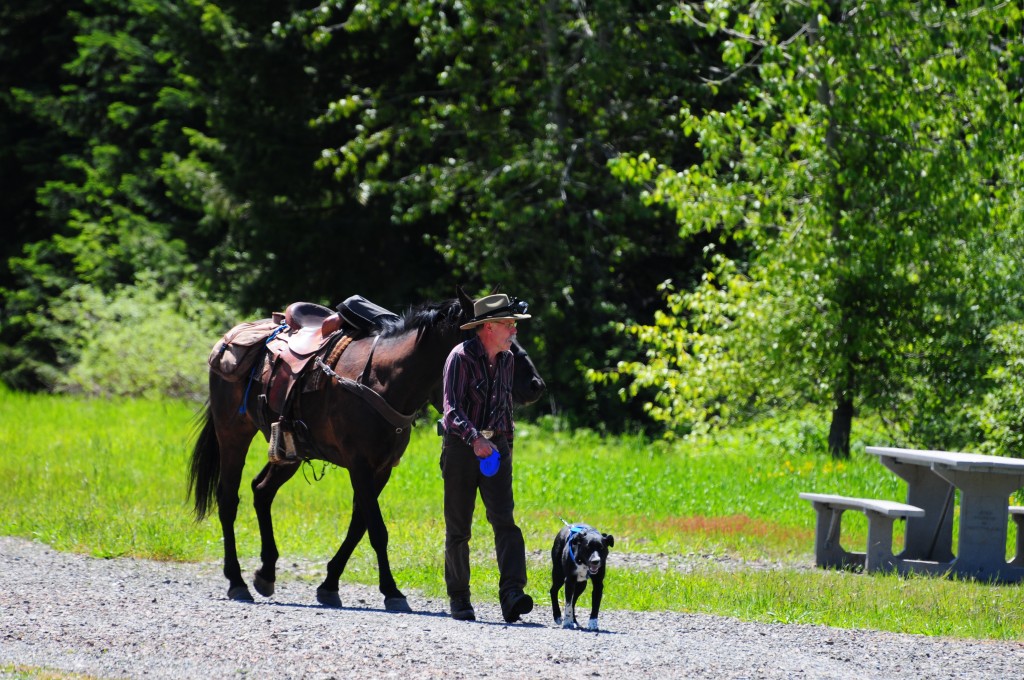 So here we are, walking with the man, the horse, and the dog, and kind of making casual conversation with the man, but also sort of paying attention to the little pockets in the wall that used to hold lighting or electronics or some abandoned train machinery or whatnot. According to possible clues on the “Bloody Fingers, Dirty Diapers” cache page, the cache is located within one of these, and I was kind of counting and looking along the way, which slowed us down deliberately to pull us a little away from our odd walking companions. I wanted us to have the tunnel experience on our own, a little bit.
Eventually, they drifted away from us, and the click clack of the horse’s hooves advanced ahead of us and disappeared. We were half-blindly looking about for this cache, in the middle of the tunnel where the light is all gone. We had our headlamps on, but it only allowed us to see a few feet ahead of us.
Suddenly, we heard a noise in the distance behind us. “What was that?”, I asked Jason nervously. “It’s nothing, don’t worry about it”. To me, though, it sounded like a frightened animal. It sounded like a large, frightened animal wailing. And the sound happened again, and it was getting closer….
I was getting spooked. My mind was racing trying to figure out what it could be. I oriented myself towards the noise, looking for a light coming towards us, something to indicate that the noise was human.
Then, Jason decided we were done looking for the cache, and needed to move. He encouraged me to start walking and look later. Then he picked up the pace. He said he was not worried about the sound, but his pace indicated that he also felt the prick of danger. He actually began hiking so fast I was having trouble keeping up with him, and thought about asking him to slow down, but then I would hear the noise behind us again, growing closer maybe, and I could NOT get out of the tunnel fast enough.
The last mile seemed to last forever. As we got closer to the exit and that window of light grew larger, I could see shapes moving around in it. I was confused at first, but then realized it appeared to be the silhouette of the cowboy and his dog. Where was his horse, though? And why was he dancing around the exit like that?

As we got to the exit, finally, I realized my recognition was correct. The cowboy was standing there to greet us, anxiously smoking a cigarette and asking us, “Did you see him? 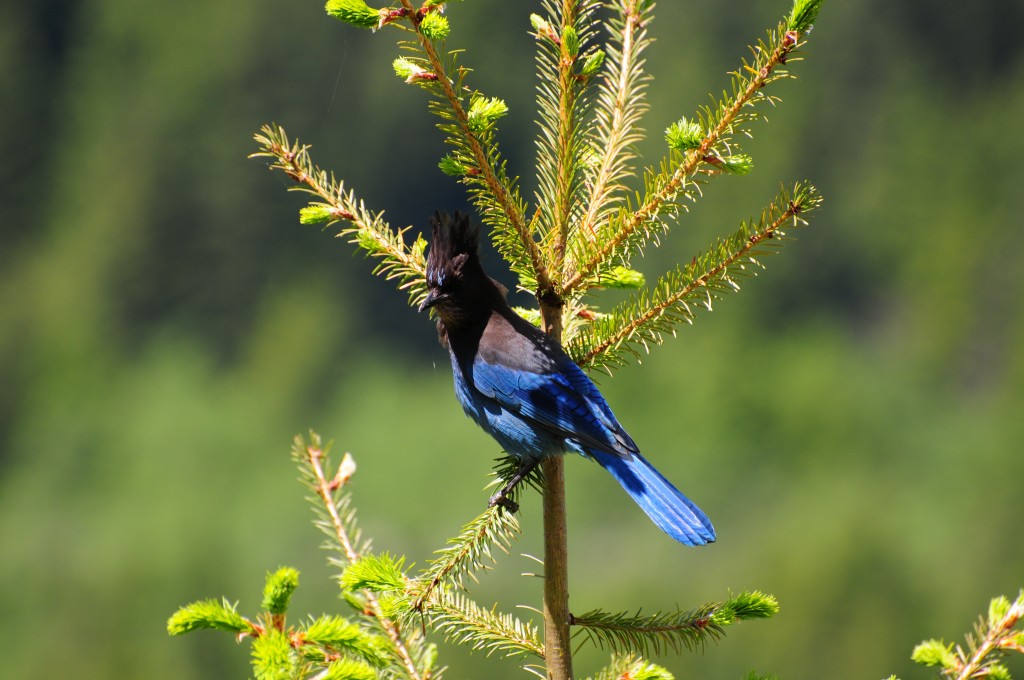 Whaaaat? See who? The Poltergiest of Snoqualmie? I was really confused. He explained that he was waiting for his friend, another man leading another horse. I told him about the sounds I heard, and he explained it was probably the horse. Jason told the man that I had been scared it was some kind of bear or cougar who had wandered in the tunnel. “Oh, that happens all the time,” the man said. Really? Man, I would totally pee myself if I was walking in that tunnel and came across a predator like that in there with me.
Apparently, the man leading the horse did not listen to this cowboy when he counseled this guy to bring a spare flashlight. The man had his flashlight die on him, and was leading this horse, who had never encountered this kind of adventure, through the tunnel in absolute darkness behind us. Those noises were the sound of a horse in terror, which I am both surprised and glad I had not heard before enough to recognize.
This other man finally showed us, the horse blowing and snorting, shaking and rolling its eyes. After a few minutes, the men mounted up and rode off to have a mountain trail ride, the dog trailing behind.
Jason and I found IronHorse, then had a picnic of dinner rolls and cheese, bought at the Pike Market yesterday, at a table surrounded by mountains, crisp air, and singing birds. It was totally awesome, and totally worth the terror.
The way back through the tunnel was so much less frightening. Children on bikes following their parents breezed through. We must have seen about 20 bikers, a few hikers, all kinds of people. And we found that cache we were looking for after all, about halfway through. I am really glad we went, although it did take up a bug chunk of our day and energy. What else would have been a better way to spend our day, besides having this crazy adventure surrounded by so much beauty? 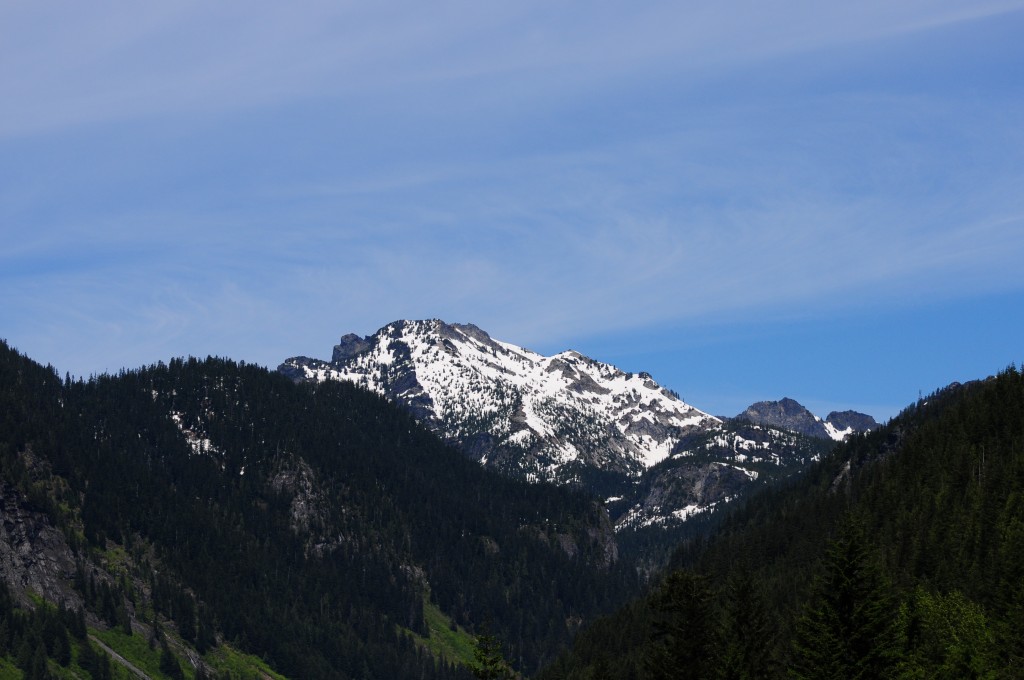 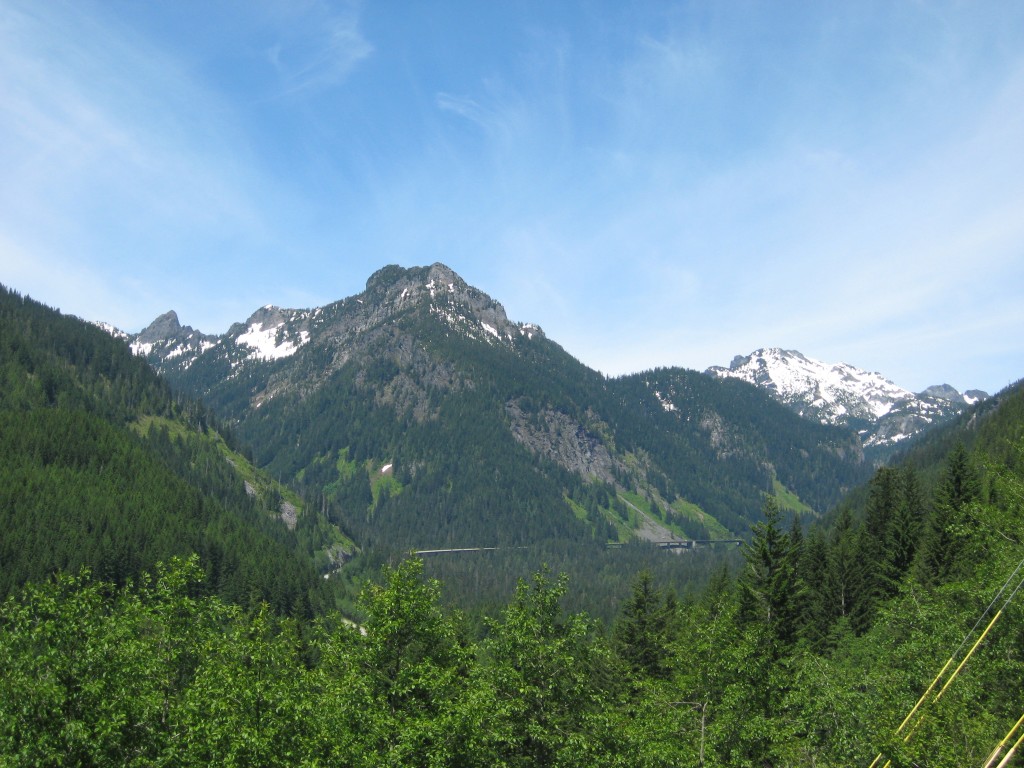 One thought on “Something Wicked This Way Comes: Snoqualmie Version”