So, after talking to a friend who has seen my posts, I realized I needed to clarify, for those who might have missed my ButterFingers and a Broken Leg post, that these stories I am posting now are from the past.  They are stories from the road trip that we took this summer.  I am still recovering from my broken leg and am not out hiking around in the West in the moment.  My days are spent on the couch, in my bed, and lately also at my office some days, and at physical therapy the others.  I am hoping I can be hiking again by this summer, and walking again in the spring.  For now, I am stuck on crutches, teaching the muscles of my ankle and leg how to walk again.

I will post the dates of the stories from now on.

We reached Yosemite on July 1, after hiking around the Mono Lake area and getting a little dehydrated.  I think the youngest boy was just wiped out from the rough night in the tent the night before, because he fell asleep pretty soon after we got into the park.  So, regrettably, the only views of Yosemite were ones we got from the car window and a few parking lot stops.  We kind of wanted to go hiking, of course, but also we were all worn out from the morning and also thought there would be time for that the next day.  We had miraculously gotten camping reservations in the park and were headed to the Valley, hoping we could find a place to wash the pee out of the youngest’s sleeping bag. 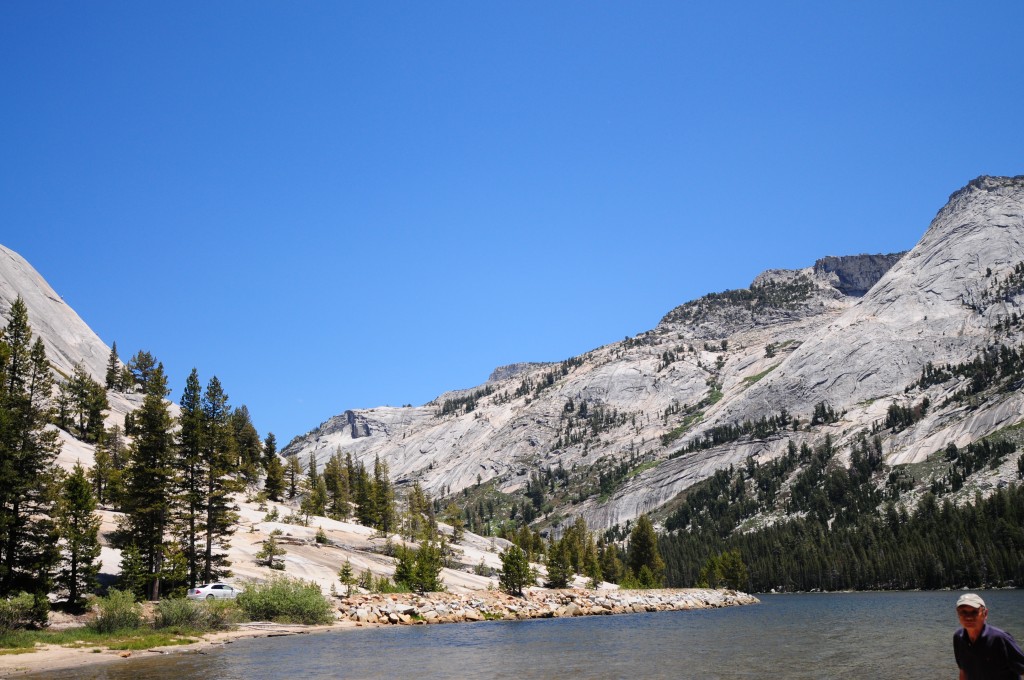 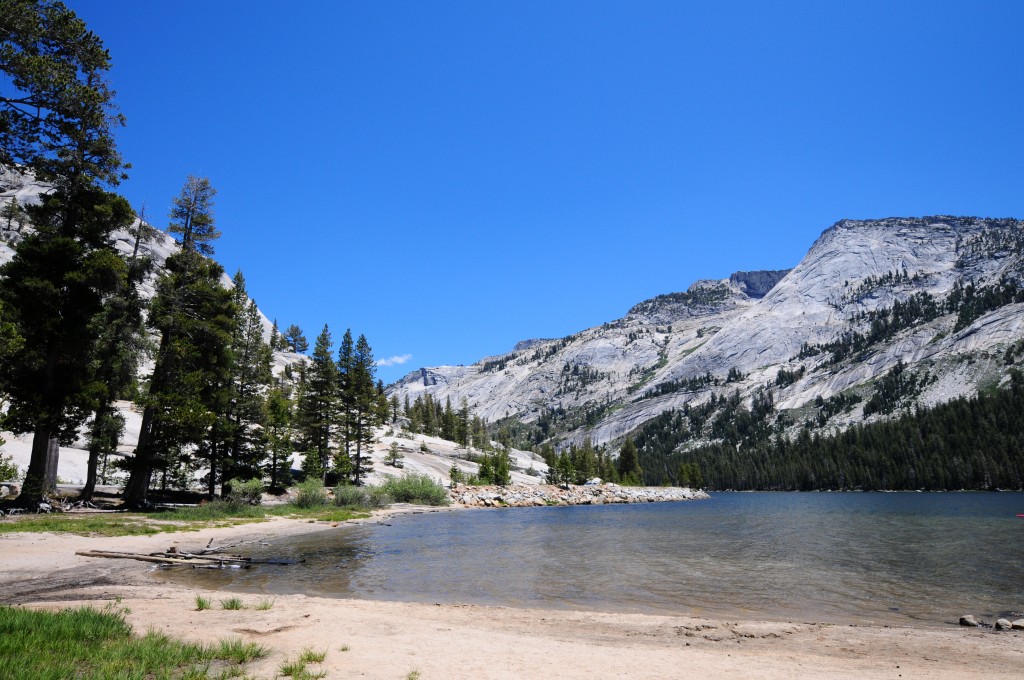 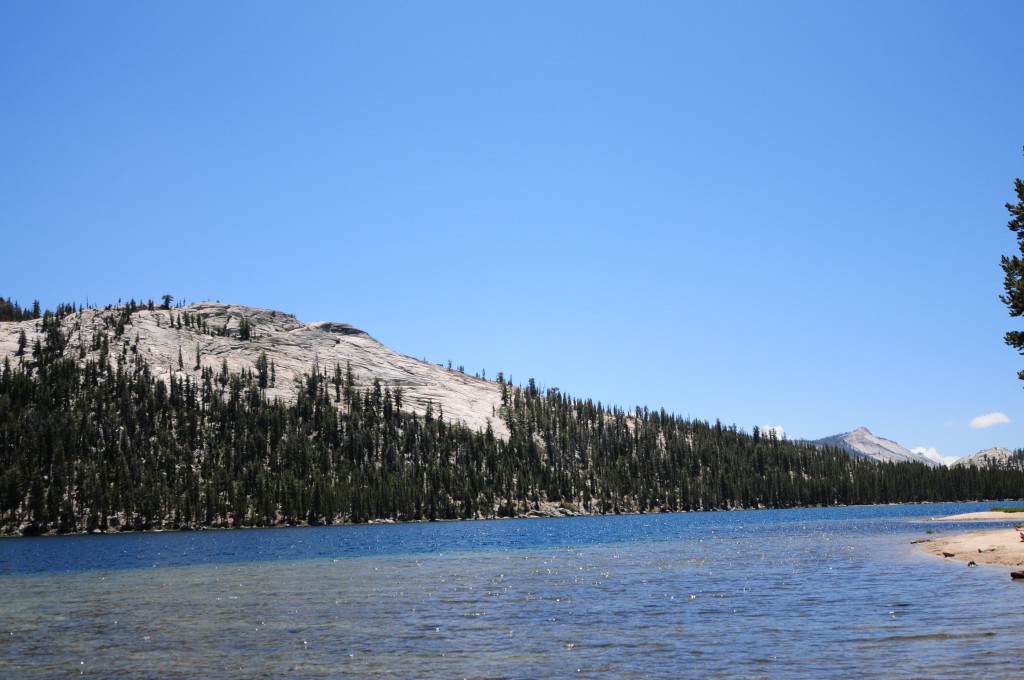 The above shots were on the way to the Valley.
So the first problem with Yosemite was this: everyone loves Yosemite. We were certainly not alone in the park. Our early stops had a lot of people around, but once we got into the Valley, there was no breathing room at all. Our search for a place to get some food and wash a sleeping bag were fruitless. There were no parking spots available in all the lots we were trolling around in. We were short in patience and high in frustration. Finally we decided to get out of there.
On the way out of the park, the adults in the vehicle had made the decision that we would forego our camping reservations for the night and head for a hotel, due to the pissy sleeping bag and the sheer exhaustion we were feeling. But little K missed that part of the conversation, and when we pulled up to Crane Flats to sit in the line at the campsite headquarters just to tell them they could give our site to someone else, we discovered the second problem with Yosemite.
The second problem? Bears. No, we didn’t see any, but the bears are notorious in this park for raiding vehicles for food. I had read so many warnings about this before we got here that I had been OCD about keeping the rental car food-smell-free this whole trip. I had talked to the kids about this, probably to the point that I caused them paranoia as well. How much it was affecting them, though, I didn’t know until this moment, when we pulled up at the site.
Suddenly, the little one was awake, and screeching, and holding his stomach. He told us his stomach hurt, hurt so bad. NO, he had to go to the bathroom really bad, that was it!, he says, but he was crying and distraught. I ended up getting out of the car and walking up to the ranger shack to ask them if I could just walk him to the bathroom in the campsite, and they told me that actually it would be faster to walk to the nearby gas station. I let them know about our canceled reservation, and a horrible scene then ensued in said bathroom, as I tried to insist my son actually use the bathroom and he tried to tell me that he didn’t have to and he was suddenly fine.
And maybe he was right, after all. Because he was fine, as soon as we started putting distance between us and that campsite, and I came to realize that his stomachache was really just a case of extreme anxiety about camping there, due to his picking up my bear preoccupation and distorting it into a actual phobia. Arktophobia or ursophobia, depending on who you believe.
I think it was safe to say that although we were all excited about the idea of a nice hotel room in San Francisco, he was easily the most excited of all of us.
Here are some of the views we did get in before we left. 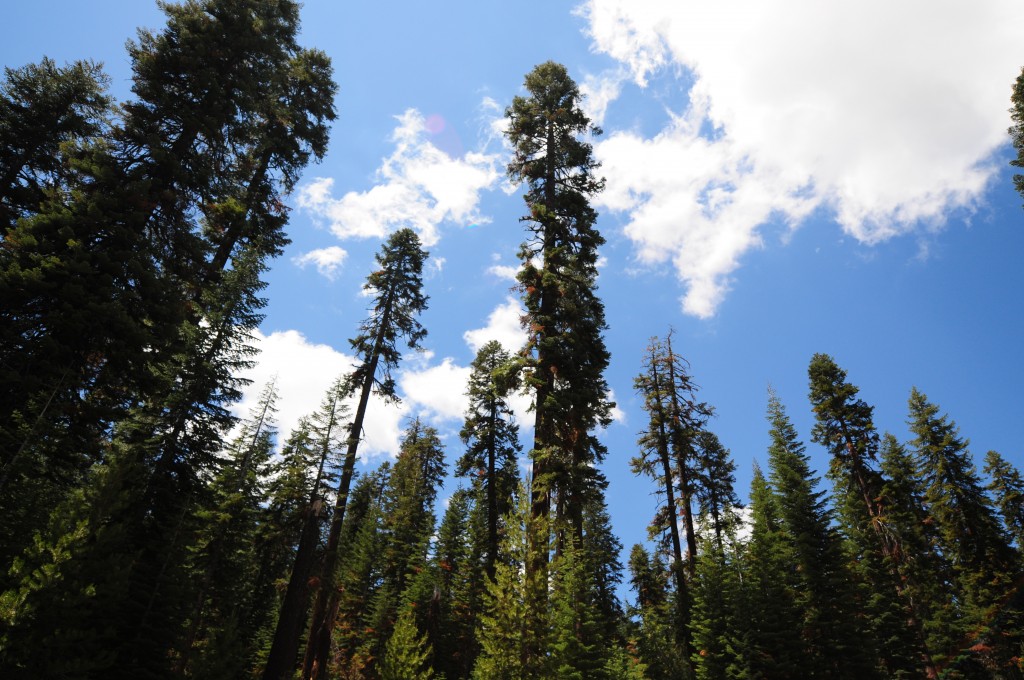 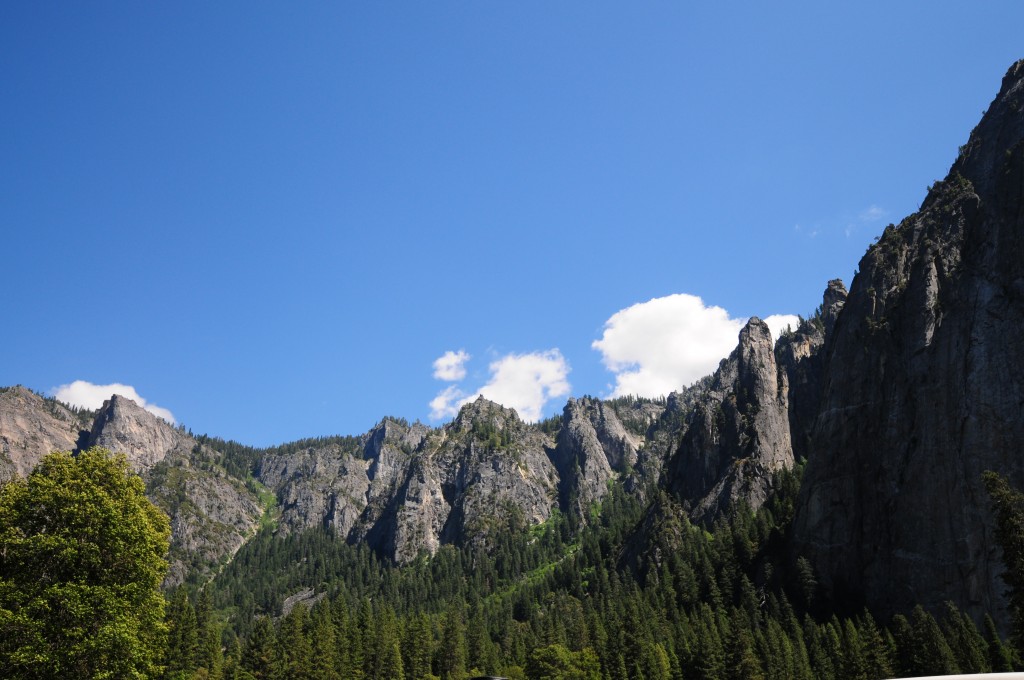 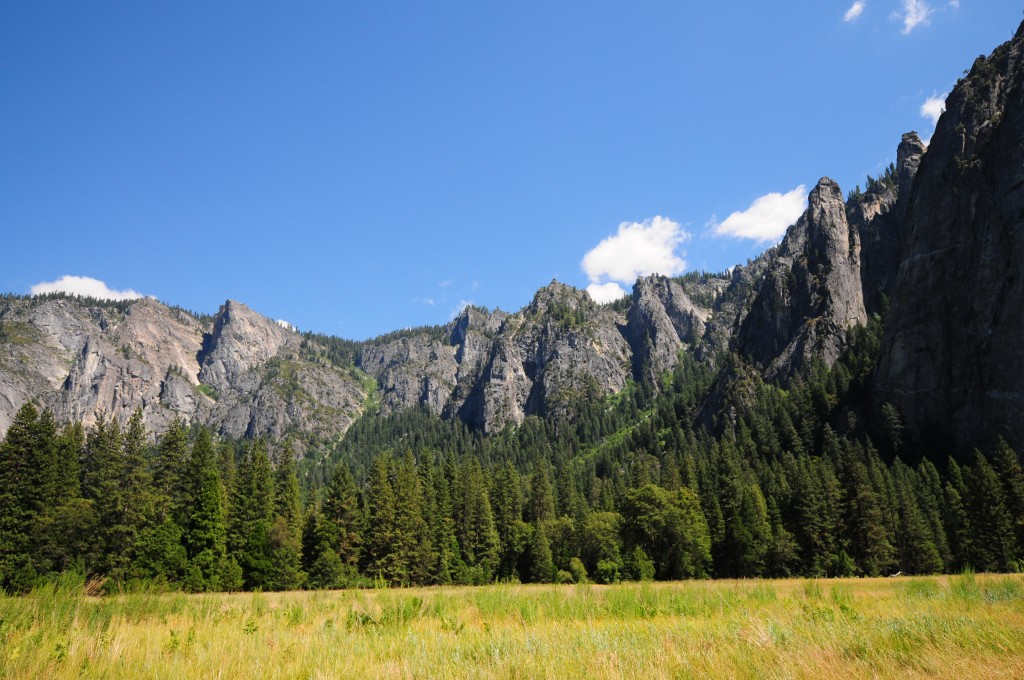 Also, one last clarification. In my last three entries, the Mono Lake MonoMyth series, I was trying to use elements of our journey to represent parts of the “hero’s journey”, or “monomyth”. This is a literary device described by Joseph Campbell that allegedly is evident in some of the classic stories of our times; Star Wars, Lord of the Rings, The Matrix. Ancient religious figures were held up against this story frame and it could be diagrammed the same way: Buddha, Moses, Christ. In a way, it could be said to be a classical structure of a myth.
Well, in this framework, towards the end, the hero is said to obtain a “boon”: a great gift that is bestowed upon the hero. Part of the quest of the hero is the decision to share this boon with the rest of the world, or keep it to themselves as a sacred secret. In the words of Campbell: “This miraculous energy-substance and this alone is the Imperishable; the names and forms of the deities who everywhere embody, dispense, and represent it come and go. This is the miraculous energy of the thunderbolts of Zeus, Yahweh, and the Supreme Buddha, the fertility of the rain of Viracocha, the virtue announced by the bell rung in the Mass at the consecration, and the light of the ultimate illumination of the saint and sage. Its guardians dare release it only to the duly proven.”

Well, in our case, our journey did have a boon, and I don’t know if I can put it into words yet the meaning of it. But it was this moment that made the whole journey worthwhile for me and my oldest son; standing in Yosemite Valley, looking up at the face of El Capitan. I told him stories about men who had climbed it before, and he looked me in the eye and said he would like to be one of those one day, that he would like to learn how to climb so he can come back one day and conquer this mountain.
I have a mountain or two of my own that I have been inspired by, so I hope he does, and I hope this boon is something that came alive in him this day that we have yet to see fully materialize. I do know, though, that even now, a half a year later, if you ask him, like I did just now, what his favorite part of his vacation was, he will tell you, “Yosemite.
El Capitan.” 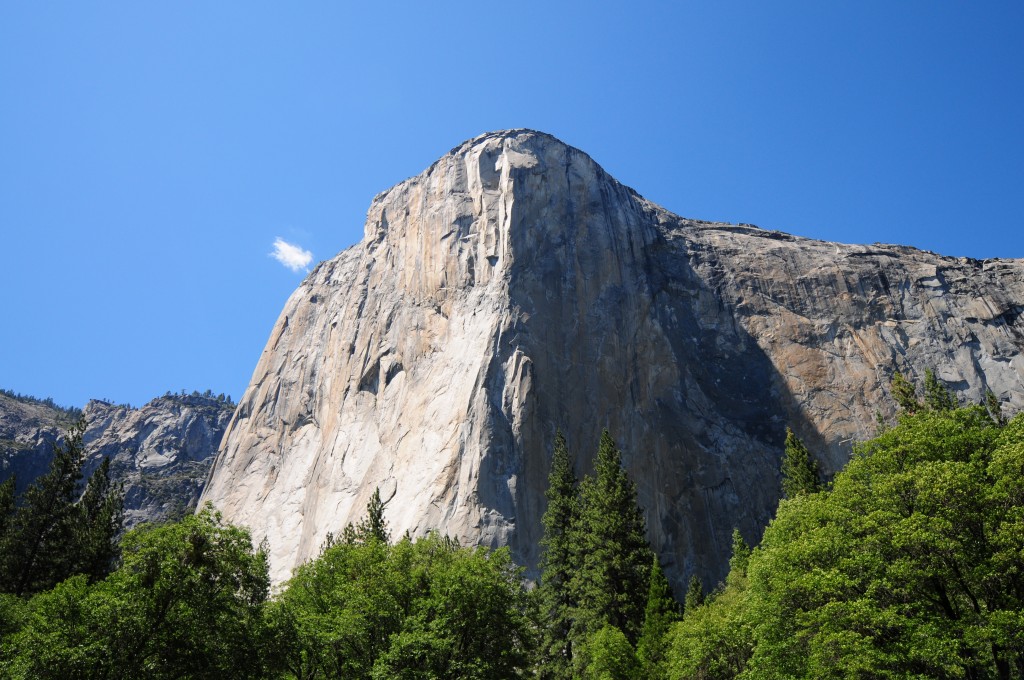