I just returned from a primatology conference in Puerto Rico, and of all the lectures I attended, my favorite one was one that had little to do with my day-to-day work, but shared some fascinating information that I want to share with you. Okay, so here is the deal: my favorite animals are dogs, horses, and monkeys, and of all the monkey species, my very favorite is the Cotton Top Tamarin. Of course I love my long-tails, but if I could work with any monkey species ever, I would pick these adorable, flashy little moppets over any other. I really love the idea that there is a group out there, Proyecto Titi, that is trying to save these little guys, and are doing it in a really smart way. 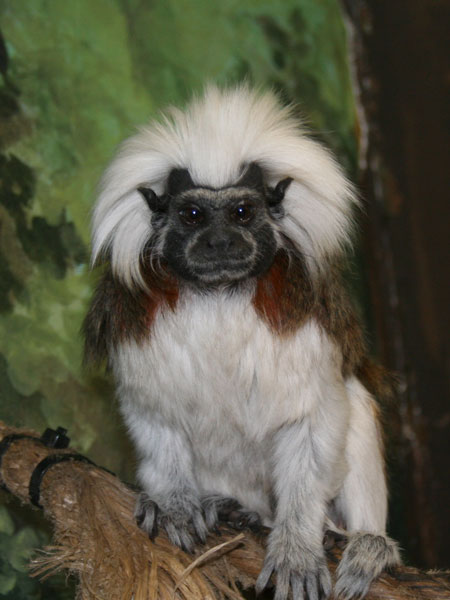 Proyecto Tití is essentially conservation program that combines field research, education initiatives and community programs to make the conservation of natural resources economically feasible for local communities in Colombia, which is where the cotton top tamarin is trying to hold out against extinction pressures. The program is designed to provide useful information to assist in the long-term preservation of the cotton-top tamarin and to develop local community advocates to promote conservation efforts in Colombia.
In the talk I listened to, they discussed the efforts to first make a census of how many members of the species were left in this ecological range. Based on the methodology they came up with, it was estimated that there were about 7,500 of these guys left in the wild in 2005 or so. This low number, and the pressures placed upon the remaining members by deforestation practices and habitat destruction, led to a 2008 classification as Endangered animals.
Proyecto Titi as a group was smart enough to realize that they could not just go into Colombia and start telling the people they have to save the monkeys. They had to figure out the reasons why the habitat was being destroyed, and work on reduction and replacement behaviors. They also had to integrate saving the monkeys into the culture of the this area.
They accomplished those tasks in some of these ways:
Bindes: One of the reasons for deforestation in the area is that the local people are still cooking their food over open fires. An average family of five burns 15 logs a day for cooking of meals. The conservation group was looking for alternatives, and realized that some families were using termite mounds as bindes, which is essentially a way to retain the heat and reduce the amount of firewood that needs to be used to cook. It is time consuming to find termite mounds for everyone, but the group realized they could craft bindes from clay that acted in the same manner. This was able to reduce the amount of firewood needed by families to 5 logs a day.
Eco-mochillas: twenty years ago or so, there was no plastic in the environment of these little tamarins, but nowadays, it is a huge problem. There is no waste management in this area of the world. Trash is either thrown to the roadside, or burned. Plastic was accumulating in all areas, including the cotton top tamarins home range, further reducing the ability of the forest to survive. Mochillas are traditional bags made in Colombia. The conservation group had an idea and shared it with the local people, and it has taken off. What they do now is gather the plastic bags that are littering the environment, and then re-use them to create eco-mochillas; essentially, a purse crocheted from these plastic bags. Each bag is made from about 100-120 plastic bags. 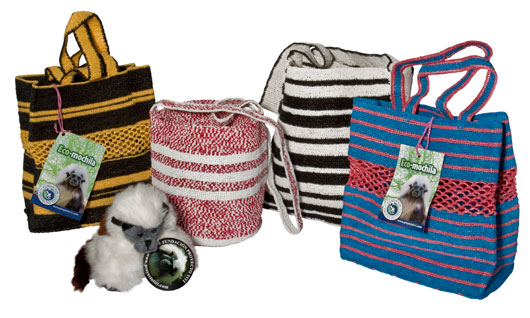 These bags are created now by a women’s cooperative called ASOARTESANAS that the conservation group helped organize. These women are pretty amazing! They decided they wanted to have a building dedicated to making these bags, and for community education on protection of the monkeys. After a year and a half of saving money, they were able to buy a parcel of land to put the building on, and then the Proyecto Titi group helped erect the building they wanted – the first two-story building in the local town. This women’s cooperative was also recognized globally for their efforts in 2012 by winning the United Nations Equator Prize, which is a highly competitive award, with over 800 nominations from 113 countries. You can view and purchase their products here.
Community involvement and education: the conservation group has done an incredible job integrating their message into the local community. This has taken many forms over the years, but some of the neat things that they do include providing a textbook to 7-9 grade students that includes messages about conservation, sustainable practices, and the uniqueness of the Colombia habitat, particularly related to the cotton top. School children rarely have textbooks in this area, so this book is particularly treasured. Students who show a strong interest and leadership skills are then encouraged to be in a “Titi group”. These groups organize for various projects and some of the students go on to purse further advanced training in conservation biology, and come back to work for the group or support their aims. Also over the years, the group has organized a drive to exchange sling shots (used to hunt and capture animals for the pet trade) for a stuffed cotton top tamarin toy, created a National Holiday – August 15, the Day of the Cotton Top Tamarin, created a dance that is shared among the culture called the Cotton Top Tamarin Dance (to raise awareness), created and distributed posters and pamphlets, created a curriculum for high school students that involves teaching sustainable agricultural practices that preserve habitat, and initiated a “Waters of the World” conference that was designed to share international knowledge regarding water quality. There is a more complicated story involving that last one, and you can read more here about that and many of those efforts if you  are interested. 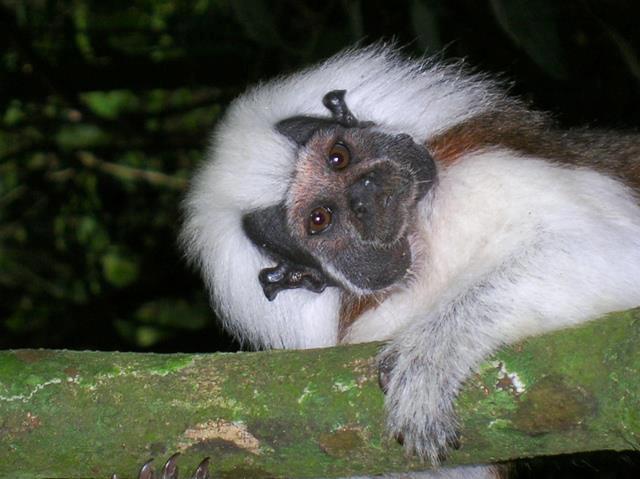 I was really excited to hear this story, about how a group who was interested in saving one really neat kind of primate ended up changing communities for the better, empowering women, and inspiring children  to take better care of the earth around them to allow it to continue to thrive for generations to come. Plus, I am happy that because of the efforts of Proyecto Titi, the fascinating cotton top tamarins will have a place to call home not just now, but in the future to come.