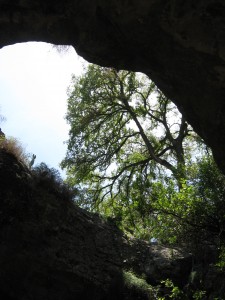 One does not simply walk into Longhorn Caverns.

There is a locked gate.
In order to get in, you have your choice to pay the $12 or so per adult for the general tour, or pay upwards of $45-70 for the Wild Cave Tour, which is about twice as long and involves going through the small passages that most people might not be interested in slogging through. They also offer a Geology Tour.
We decided on the standard tour, and were greeted by a tour guide named Ashton, or something like that, and joined a pack of about twenty people. It was late in the afternoon, and we were a little too exhausted to deal with the bumping of bodies all around us, so we kept trying to stay to the front of the pack for the tour. The guide was somewhat entertaining, full of corny jokes that he had probably told a gazillion times.
The history of the place is what I found to be the most interesting. First, the caves were used by Comanches, who prob ably discovered the caves about 400 years before anyone else. The Comanches were not necessarily the most easy going of the Native American tribes. When the settlers moved into the area, the Comanches started stealing women away and then holding them for hostage here in the cave. Sometimes, if the ransom was paid, the girl was actually released to the family, but sometimes not. One story that our guide relayed that I found very compelling was that of a 18 year old girl held hostage, who was the daughter of a wealthy land owner. Her father called in the Texas Rangers to rescue her. While about three hundred Comanches waited with the girl in what is known as the “Indian Council Room”, thinking they were going to get either a ransom, or in a scrap with equal numbers of Rangers, three brave Texas Rangers slid down ropes in another entrance, sneaked into the room, got the girl, and got her out, before the Comanches realized it. One of those Rangers later ended up marrying this young girl, who was about half his age, and they ended up settling in Burnet. 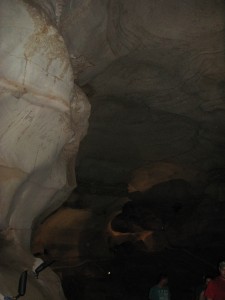 The caves were also used as a hideout for outlaw Sam Bass and his crew of bandits.
Later, the caves were privately owned by one D.G Sherrard, who ran a speakeasy in the cave during the prohibition era. Patrons could come and have a nice meal in the Council room. There was a bandstand not far from the main room where people could dance. Our tour guide pointed out where the bathroom was for the Speakeasy, and also an area where patrons would sit up on the rock formations inside the cave to have their pictures taken.
During the Great Depression, Sherrard sold the cave and surrounding land to the state of Texas. Soon after, during the New Deal era, Franklin Roosevelt’s Civilian Conservation Corps spent seven years getting the caves ready for visitors and turning it into a park. There were some areas of the cave that have calcite crystals that sparkle, and apparently the CCC boys thought when they first discovered this that they were looking at diamonds. Imagine their disappointment when they found out they wouldn’t be rich after all.
This cave is one of only two caves in the United States that was formed by river water, and not by geological processes. As a result, it does not have the typical 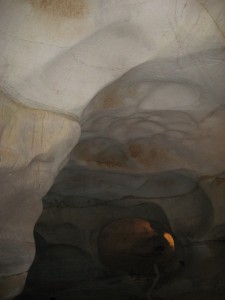 stalactite and stalagmite formations of most caves, but has sort of a smooth, rippled appearance. It was very beautiful in many spots inside the cave. The lighting that was installed in 2012, which replaced the lighting installed by the CCC, was designed to display some of these striking features. The cave has great acoustics, and lately the park has been capitalizing on that by having concerts in there. The cave is also available for private events, and some weddings have taken place inside the cave. Also, supposedly the cave is haunted, and there is a society that gives Ghost Tours of the caverns late at night.
Our tour ended up running a little longer than the hour and twenty minutes that were originally scheduled. There were some slow people in our group that held us up. There were also some annoying people. J and I got to the point where we could not WAIT to get out of the cave, because the people were driving us nuts. Lack of body sense, too many children with little supervision, loud talkers, camera-stoppers and entire pathway-walkers. Good grief.
Inside the cave, there is an answer for an earthcache. Along the trail system outside the cave, there are a few more caches. We found one, which was a fun ammo can, but at four pm, it was too hot to contemplate doing more. So, we made our way back to the Willow Point Resort, figured out how to go to the lake for a swim in the slowly-disappearing Lake Buchanan (the drought has not been kind to this lake), grilled some killer steak fajitas, and relaxed in wait for our next adventure.

One thought on “Hill Country Highways: Burn it, Durn it! Episode 3, in which we visit the caves”