It was one of those moments that is so typical of us, and yet so frustrating.  He was on his tiptoes, and I was leaning over from a picnic bench, trying to make sure I didn’t fall down.  We were peering into the windows of an empty cabin.  A curtain fluttered from the breeze of the fan, a breeze that could have come from our sighs.  These were sighs of regret over the choices not taken. 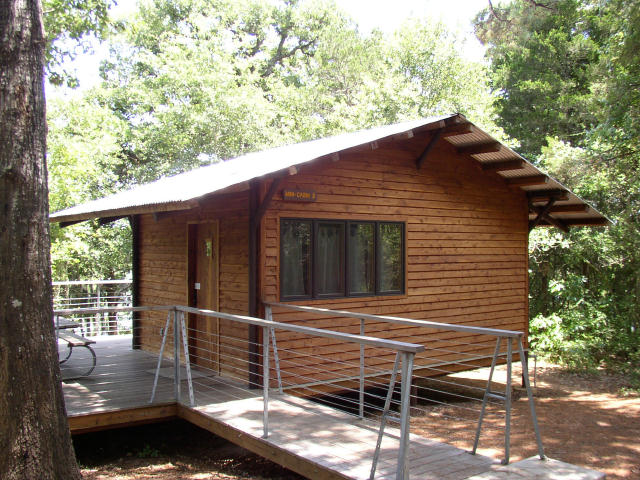 We made our reservations for Buescher State Park back in December.  I should have called it in, but I was confused about the difference between the cabins and premium screened shelters, and how each one is reserved in the system.  We had known since two years ago, when we came up here to hike one day, that we wanted to come back and reserve Cabin #3, but instead I had reserved us a premium screened shelter, which looks like this below: 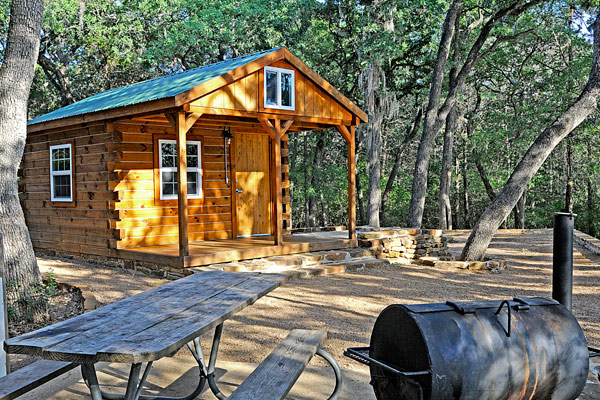 This weekend, the weekend of the Texas Challenge in Bastrop, we came up to the park, claimed our campsite, got our keys, and then never came back, until this minute, the minute of regret, as we were leaving town two days later.  We had coughed up our $62 (after coupons) that we ended up spending on the reservation as a “donation” to the state parks.  We had also managed to spend another $225 we didn’t intend to on two nights at a hotel.

Why, you ask?  Because, this is what we do.  Most of the time, we are really great for each other, but sometimes we do these things; I overplan, he procrastinates, we forget to communicate, we let timelines slide, we go with the flow so much that we end up missing out on things we meant to do.  We ended up doing so many things this weekend that we never did the things we meant to do, like set up our campsite, relax in nature, look at the birds, drop a line in the lake, take a hike on the trail. We would have loved to take a bike ride from Fishermans to Ferry Park in downtown Bastrop.  All weekend we drove back and forth in front of The Roadhouse cafe near Bastrop State Park, and never once did we sit down in there and have some hot sandwiches, fried pickles, and iced tea.  I would have liked to get some pictures of those gorgeous wildflowers blooming all along HIghway 71, maybe stick the kids in there and be like a real Texan.

What we did instead is spend an ungodly amount of hours sitting at MayFair Park in Bastrop, in between going to geocaching event after geocaching event.  Four events in twenty four hours.  We spent hours planning, scheming and texting our team.  We talked to lots of friends and teammates, exchanged travel bugs, spent too much money at Buccees, too much time at La Hacienda.  We (or rather he) gave a water-bottle bath in the parking lot to one dirty little boy, who spent most of an afternoon rolling around in a dirtpile.  We drove around to seven different locations to grab codes off doors to log the Lab Caches specifically put out for this event.  We bought some more rocks for son and I’s rock collection, spent too much money again buying pecan treats and gifts at the Berdoll Pecan Company, checked out some bronze statues at a foundry, took a tour of a facility that bottles rain water and turns it into drinking water (and then tasted it – quite good!).  We spit off a bridge and got a certificate for being an official SOB (member of the Society of Bridge Spitters).  He taught the boys how to play shuffleboard.  We bought a couple more bottles of mead and one bottle of a sweet table wine being offered as a sample at Cripple Creek wines.

Through all of this, we were just too tired each night to set up camp in the dark.  If we had the cabin, it would have been all right – we could have just thrown our sleeping bags over the bunk bed style cots that are already set up in there.

We had no idea what the screened shelter we had rented even looked like until Sunday afternoon, when we stopped by to return the keys to it.  The rangers had already called us, wondering what the heck ever happened.  We peeked inside it, then inside the cabins.  It turns out the floor was so neat and spotless that we probably could have just thrown the sleeping bags down on it and been all right, saved ourselves a few hundred bucks.  It would only have taken us mere minutes to set up, yet we were too busy to ever even stop to look.

It reminded me of other times, like when we arrived midday at the campsite we had rented for the night before and never claimed in the Redwood Forest, only to discover it was the best campsite ever, and really not that much farther down the road than the place we ended up sleeping at.  So much for all my planning and dreaming.

For now, all we can do is sigh, shrug, and commit ourselves to coming back another day; another day to do all the things we didn’t do.

I am going to make it April, before those wildflowers have all hidden their heads for the summer.  This time, I am calling the reservation line, and nailing down that Cabin #3.  I hope you are reading a completely different blog entry this time next month.

3 thoughts on “All The Things We Didn’t Do”