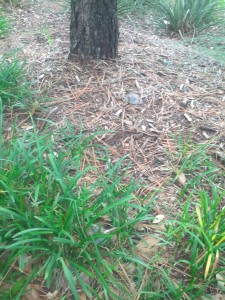 It was another day on the Cinco Ranch Nature Trail, trying to get some exercise for myself and the dogs.  My mission for the day was to check on a geocache I had hidden out there on one of my recent forays, since the last seeker was unable to find it.

After checking on it, I was only a few feet down the trail when I noticed these little babies (there are two in the picture).  Their mom was above me in the trees, squawking in panic, probably thinking I was gonna let the dogs eat her babies.  Amazingly, the dogs weren’t even curious about these vulnerable little fledglings.

My head was telling me what to do in this situation – leave the birds alone, and mom will take care of them.  However, it was hard!  Now I know how it happens, how people end up taking the baby birds home and trying to “rescue” them.  I have been following this Facebook page about birds, and it seems like every other day lately someone is being lambasted for trying to save the baby birds.  Even though I also get annoyed about those posts (shouldn’t those people know better?), I watched the baby birds struggling and my heart was telling me to do the same thing.

What I should do, if I want to help baby birds, is keep my cat inside.  This is a simple thing that has huge ramifications, but none of us can seem to resist her meowing and reaching at the door to get out.  It is theorized right now that cats kill about one to 4 billion birds per year. The birds are most vulnerable around this time, when the babies are learning to fly but haven’t quite gotten it.  It makes me sad to think about all that work the birds did for their young, only to see them get gobbled by a domestic pet, or ran over or snatched up by perhaps some well-meaning animal lover.

I think I amgoing to at least get a bell for my cat, so at least when she does go outside, she will be a little less lethal. 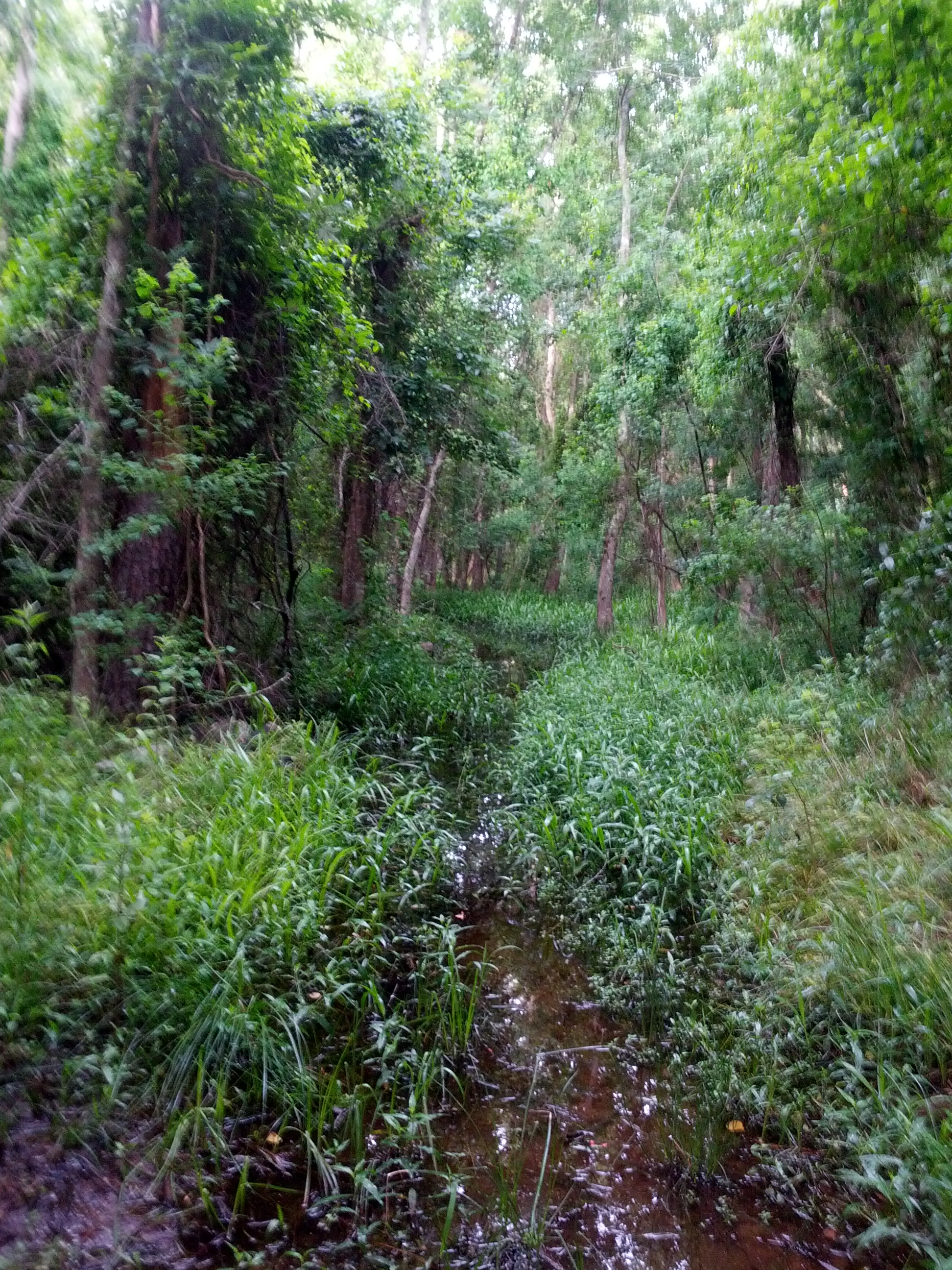 So, there were some things we didn’t think about when we planned our activities for National Get Outdoors Day.  Like, the recent rains…and the consequences of that.  I dressed for biking, but I wasn’t so much dressed for hiking, especially in THAT.  That, above, is the trail we were going to take into the forest at Spring Creek Nature Center to go on a nice little jaunt to look for birds.  Standing water on the trails equals mosquitos, and not just your normal flying around a little by your face tiny little mosquitos, but the kind that are like big enough to carry off a small animal, and who hunt in packs, and who don’t just go away when you brush at them, but rather find that little bit of exposed skin, regardless of how much DEET you put on it, and go to town.

We all had great hoardes of mosquitos lingering around us;  the two of us, our guide Matt, and the three summer interns from the Nature Center who had decided to join in the fun (and who were much more appropriately dressed than me).  The interns wore big rain galoshes, long sleeve shirts, lightweight hiking pants, and wide brimmed hats.  I had on shorts, tennis shoes, and a v-necked summer shirt that exposed my shoulders.  I would have been very comfortable on my bike, for the record!

The thing is, we never made it to the biking.  What we did instead is meet up with Matt for the bird walk that they typically schedule here at this Nature Center for the second Saturday of the month, and then proceed to spend an hour in a swampy forest getting eaten alive and trying to find the best way out of all the waterlogged trails.  We saw very little birds – a cardinal here and there, and I think that was it.  We DID however HEAR a lot of birds.  For that, I think it was worth it to get out there (athough J might disagree – he was pretty miserable). 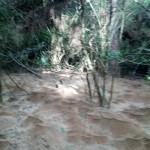 Matt is extremely knowledgeable about the forest and what it is composed of, both flora and fauna.  He pointed out different plants, insects, and butterflies as we went by.  We talked a little bit about the leaf cutter ants that build these huge colonies out there. (left pic).  He pointed out the bird songs that we were hearing as we went – Carolina chickadees, Carolina wrens, and the Northern Cardinal.  We heard a White-Eyed Vireo as we made our way back to the Center (finally!).  I picked his brain about where to learn bird calls and which birds we might be likely to see on our upcoming road trip.  I felt like I learned a lot in that amount of time, despite the fact that we were pretty eager to GTFO of there as soon as we arrived back at the Center. 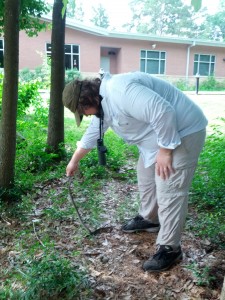 When we were walking past the area by the center where they have the nature game set up (some Scout’s Eagle Project in the past), Matt found a rat snake and caught it to show it to everyone.  I was impressed, but I mostly was interested in getting inside and wiping off my legs that were not real appreciative of the fact that I made them tromp through calf-high wet grass.  I had red welts on my legs, either from bugs or a reaction to some plant.  However, I was still game for that bike ride!  J was just sort of humoring me as we drove from the Center to nearby Dennis Johnston Park.  We checked out the road that goes between the first parking area and the second, observing the big Lodge in the back and the entrance to the hike and bike trail that extends fifteen miles all the way to Jesse Jones Park.  We went to get out, but we talked it over and J was really so over the outdoors.  My legs did not look good, and I admitted that it would be nice to just get some cream for them, get out of these wet tennis shoes and socks, and sit in the air conditioner somewhere.

We were kind of locked in to some plans later on, so we decided to see a movie instead, and I bought some cream and emergency sandals at Walgreens.  We found a couple of park and grab geocaches as a consolation prize for all those caches we were going to find on the hike and bike trail.

Dennis Johnston Park, we will be back.  We will bike those trails and get those caches.  We will probably even host a geocaching event there to do that with a group.  We will also go back for a bird walk at the Nature Center again, although some conditions apply; never again in the summer, and also preferably during a season where migrant birds are around and easier to see, like April or possibly November. And, never again following a recent rainy cycle, ha! 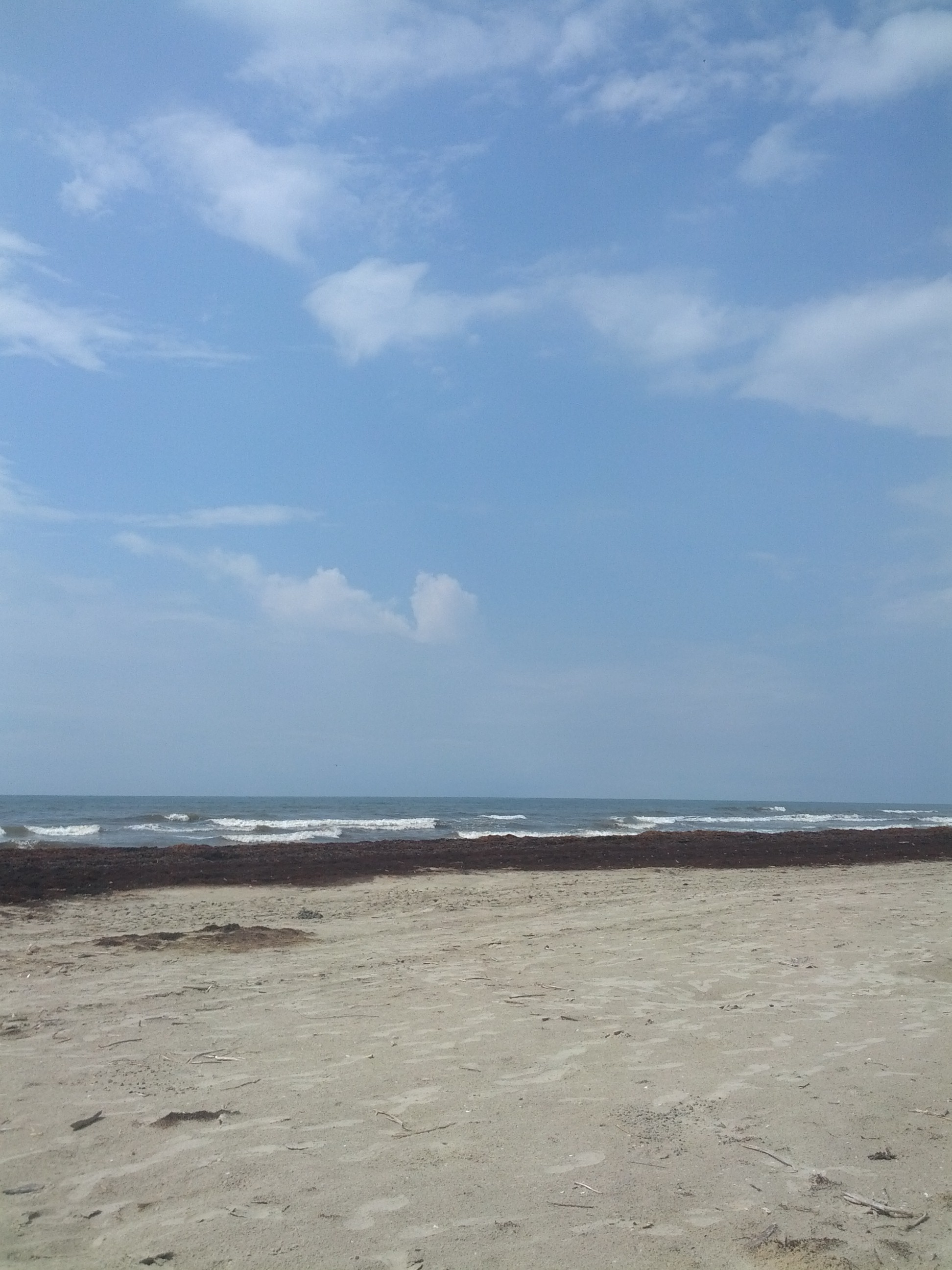 For the second year in a row, we went down to Galveston to celebrate my youngest’s birthday at the end of May.  Yes, the seaweed was still bad.  This year, cold weather in early spring led to a bombardment of Sargassum seaweed on Galveston’s shores (as well as several other coastal towns).  This seaweed comes from the Sargasso Sea, where an intersection of four currents creates a gyre.  I guess this year the currents just took it all towards the Gulf of Mexico.

The kids didn’t let that slow them down.  They were still in the water, having fun as if it wasn’t even there.  I went in with them some, and it was a little irritating at times, but we lived with it.  The worst part was having to step through it to get back to the beach area.  There was one small spot that was cleared for foot traffic but sometimes it was not convenient to get to.

There were folks meeting us out here, and so we spent quite a few hours at the shore.  We always get tired of it before the kids do, though.  We had to get out of the sun in the late afternoon, though, so we headed into the state park headquarters/gift shop to find the geocache in there and let the birthday boy pick out some treasures.  After this, we went to the part of the state park on the other side of the road.  I thought I wanted to find some geocaches there, too, until we got swarmed by mosquitos.  We did finally find one and see some birds, too: Brown Pelican, Laughing Gull, Black Skimmer, Clapper Rail, and Willet (#90-94).

There was some irony in the fact that I wanted to have the party at Stewart Beach, to be closer to the hotel, but my mom was concerned it would be too packed due to its proximity to the Sandcastle Building Contest.  Well, the contest ended up being a wash (literally), as a storm came in and turned it all into a mud pit down in the East Beach parking lot, while we had nothing but sunny skies over there on the West End.  We did go to Stewart Beach the next morning, and us adults (who were all sun and beached out) sat under the shady umbrellas while the kids played in the seaweed water again.

We’ll try it again next year, I think, but maybe we’ll think about whether to have it at the same time as the Sandcastle contest, or maybe just stay on the West End closer to the state park.