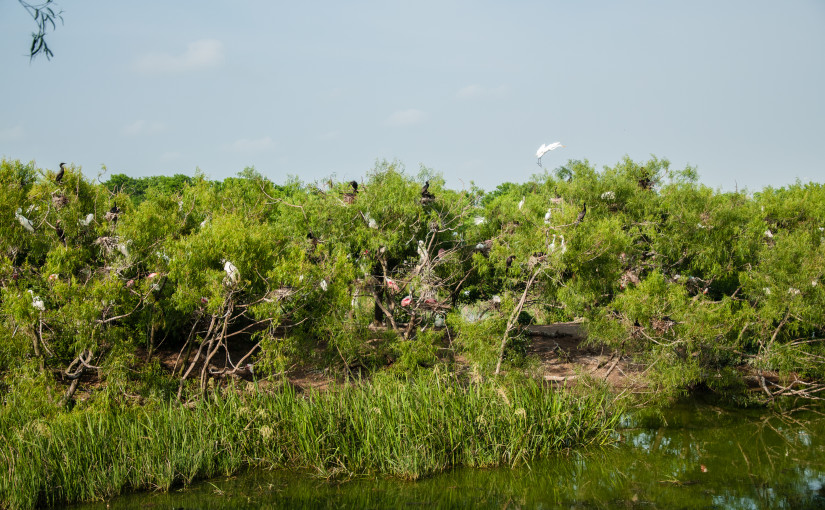 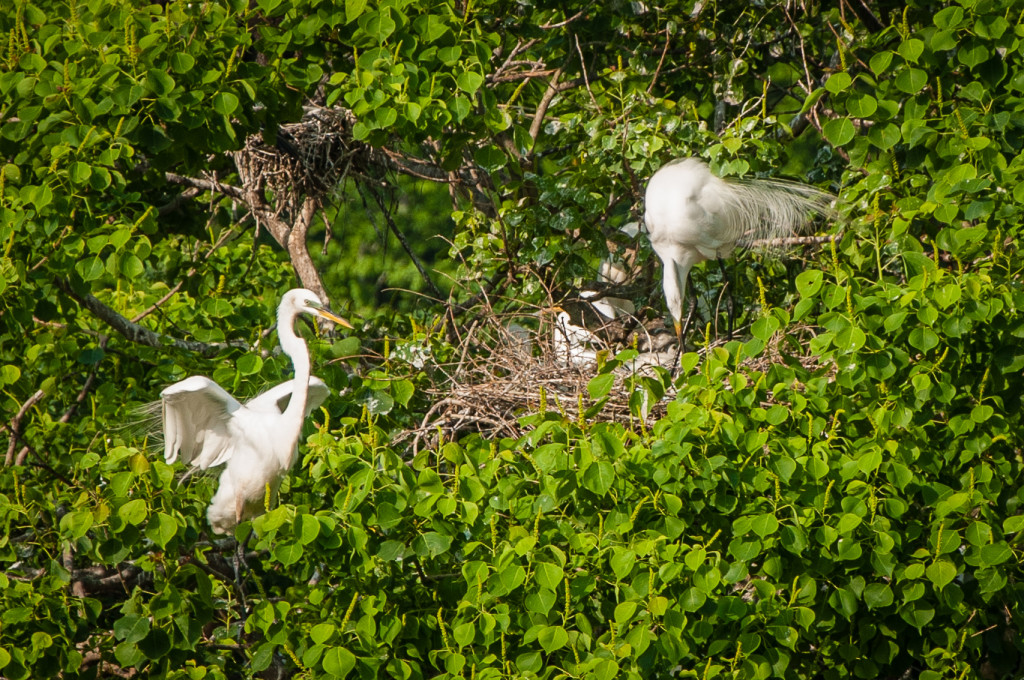 Over the weekend, my family and I went out to visit the Houston Audubon’s sanctuaries in High Island, a town at the far eastern end of the Bolivar Peninsula.  In the spring, migratory birds traveling from Central and South America who are crossing the Gulf of Mexico in search of their spring breeding grounds sometimes end up stopping here on their journey, hungry and tired after their six hundred mile jaunt over the Gulf, to the delight of birders.  In cases of “fallout”, in which strong northern winds and rain slow the birds down, there may be a higher number of migrants that end up in these sanctuaries in the spring months, as they need to stop here to gain strength before flying further inland. 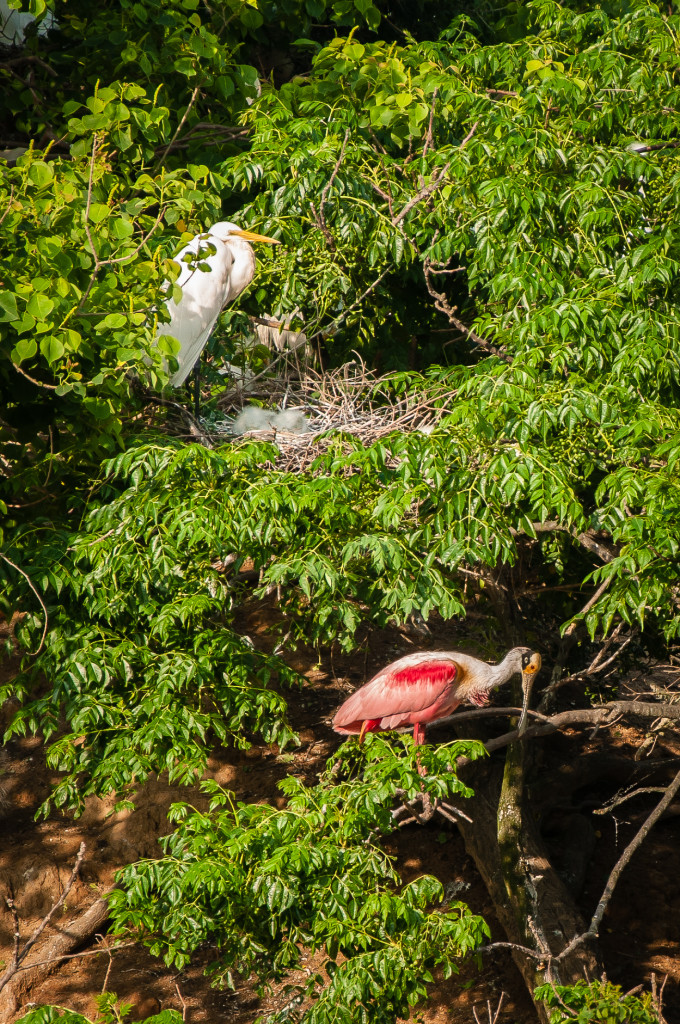 In addition to these neotropic migrants in the spring that attract birders to the area in the months of March-May, there is another attraction: the Rookery at Smith Oaks.  Back in the mid-nineties, land was donated to the Houston Audubon by Exxon, including an area where a pond had been dug out to supply water to High Island residents.  There is a u-shaped island in this pond that attracted waterfowl to build their nests, and remained even more enticing to them after hunting was outlawed in the area in 1994.  By 1995, there were 50 heron nests observed on the island, 332 observed in 1997, and by 2003, 1083 nests were observed.   In the hour before sunset, more birds appear as they flock to the island to have a safe place to spend the night.  Although there are alligators near the pond who sometimes prey on the birds, the general lack of predators (including human) means that the birds can raise their young in general peace. 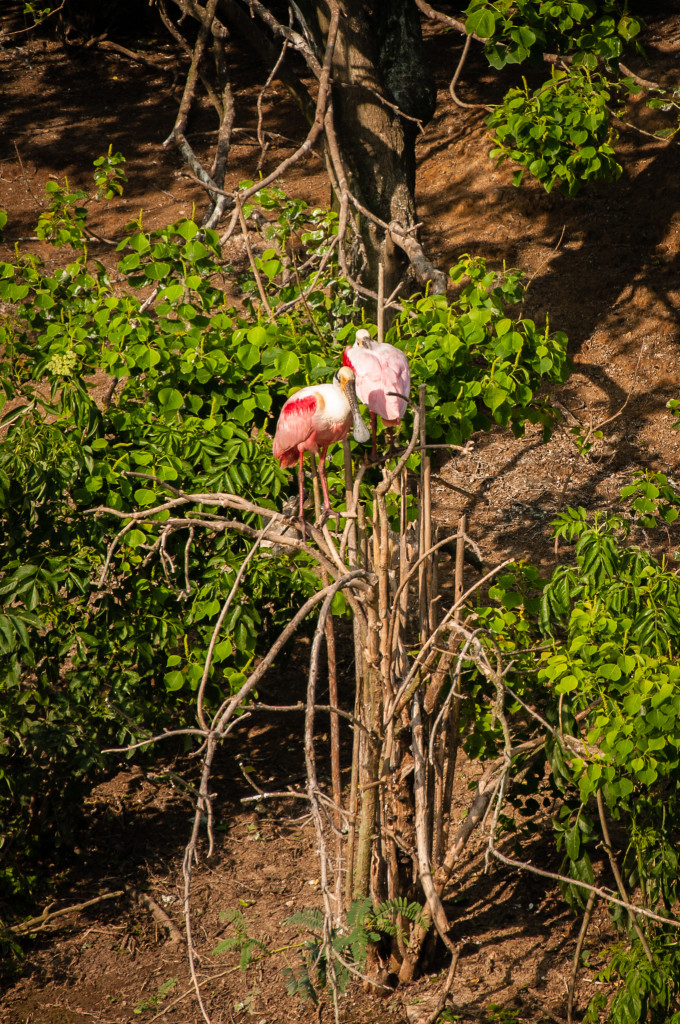 I had been wanting to visit the Rookery over the past year or two, since learning about it, because my favorite bird (the Roseate Spoonbill) nests there.  Seeing all the pictures on birding pages on Facebook was giving me the itch to check it out, an itch that was so strong that I even had to forgo spending time with my best friend during this weekend when she really wanted to get out of town and escape reality for a little bit.  I had floated the idea past her of going to this in addition to the plans she was making, but it seemed like she was not that interested, and my husband wanted to go with me when I went, and we couldn’t figure out how to make that work.  Ultimately, I needed him to come with me because he is the one with the camera, a power that he is not quite willing to hand over yet.  He is the one who took all the photos in this post (although if he had rented a more powerful lens, like we talked about ahead of time but then he forgot about), we would have even more close-up photos of the action. 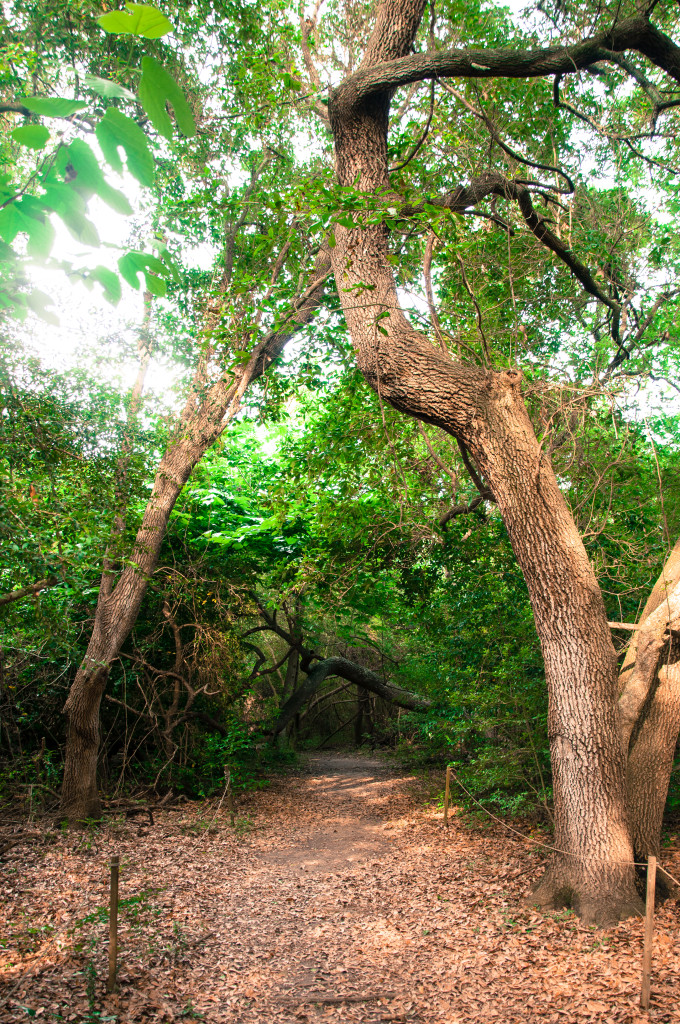 In my mind, we were going to spend a peaceful hour strolling slowly through the Boy Scout Woods section, taking pictures of multiple species of warblers, and then spend an hour watching the action at the Rookery and getting pictures of Spoonbills caring for their young.  I was thinking about the mosquitoes, we were prepared with several types of bug repellent, but I somehow was not thinking about how the rains of last week would have brought out killer swarms of these noxious pests.  Birding reports from High Island last weekend reported that the mossies were not that bad, but we’ve had some time for them to grow since.  Instead of an hour at Boy Scout Woods, we spent maybe thirty minutes, and most of that was a little frustrating for me because I asked Jason to lead, and he decided to take us on a venture that lead us deeper into the buggy parts because he wanted to explore the park boundaries, instead of taking us to the more birdy areas of the boardwalk.  At the Rookery, we spent a little closer to the time I wanted to spend, and maybe had less mosquitoes to deal with, but I still felt rushed to get through it and missed out on birding opportunities that I wanted to have.  For instance, there was a moment where I had stopped with some other birders to focus in on the fluttering in the forest, and we identified an American Redstart together, but then there were two other birds, one of which they identified as a Red-Eyed Vireo, a bird I don’t already have checked off my list this year, but my family was way up ahead of me on the trail, wanting me to hurry up to them so that they could get to the parking lot faster. 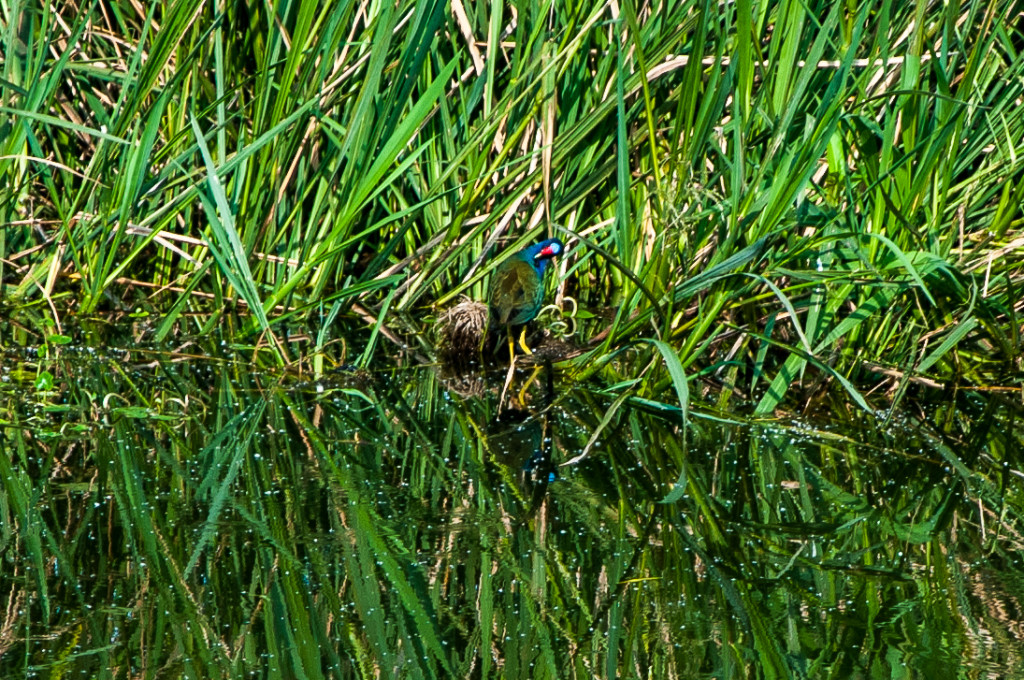 This was pretty much the story of our trip to High Island this year: my wanting to stop and identify all these amazing birds I was seeing, and Jason and the two younger boys being ahead of me on the trail going “mom, come on, bugs are biting, hurry up, let’s go”.  In the end, I feel like maybe I would have been better off borrowing a camera and going with a friend, and maybe next time, that is what I will do.  I am wrestling with how I feel about this, though.  In a way, I have a hard time dealing with the guilt if I leave Jason and the kids behind to go have an experience without them, especially one of this time length (it’s a two hour drive there, so at least four hours of driving alone, plus I easily could spend hours here).  On the other hand, I am now dealing with the guilt of having exposed my children to bugs, as I can see that there are easily a handful of mosquito bites on my baby, despite us covering him with baby-safe bug lotion, and I know my middle son got quite a few bites as well. 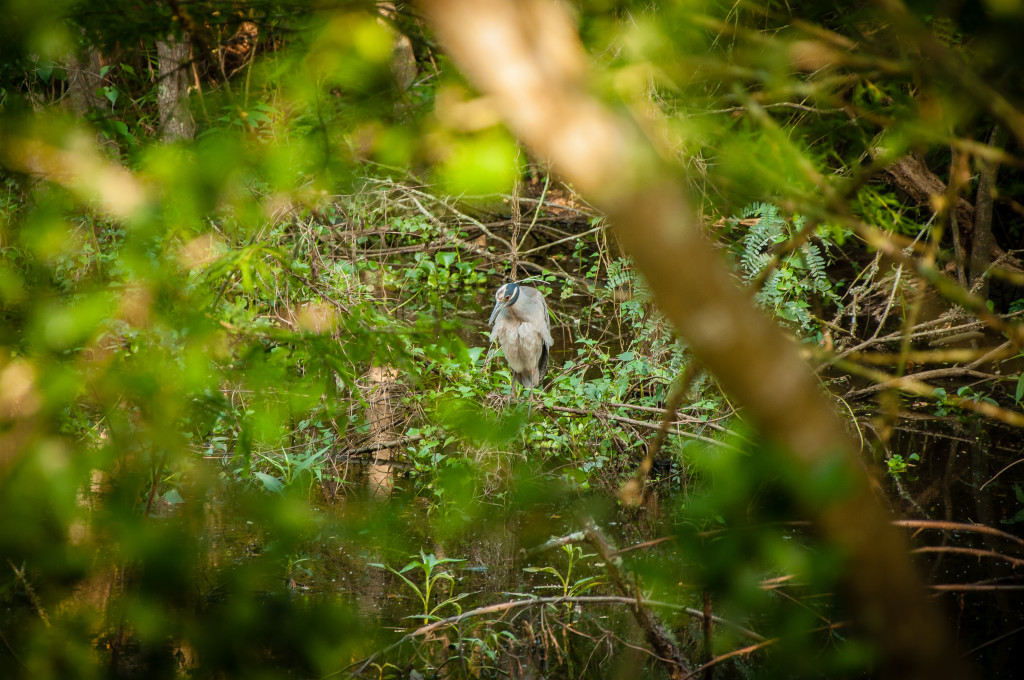 On the other hand, my kids did get exposed to a really cool experience.  It is possible that my middle son does not appreciate it now, and I am not sure of the youngest really absorbed it either, but it was sublimely enriching to be standing there on the observation deck listening to all those shorebirds amassing on the island at the Rookery.  The sound was intense: hundreds if not over a thousand cormorants, snowy and great egrets, spoonbills, and a few herons all talking in their various tones to each other and to their young.  There were moments of peace in nature: walking across a bridge in a shady section of forest, watching warblers above us, marveling at mushrooms, looking through the ponds to see if we could see alligators.

Sometimes the experiences we were having led to conflicting emotions.  At Purkey’s Pond in the Boy Scout Woods, watching the various birds who were coming to gather at the water, I had sat next to an older lady who was delighting 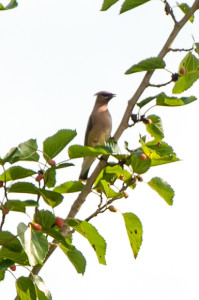 at the sight of a Cedar Waxwing who was joining the Gray Catbirds and a lone Lincoln Sparrow.  I had directed my middle son to sit on the bench lower down and to the right, because he didn’t have binoculars and wasn’t looking at birds, and I didn’t want him to disturb that lady.  He kept coming back up to me, though, and asking “but why can’t I sit there?”, gesturing next to the lady, despite my having already explained this to him.  This is typical behavior from him and is so frustrating, because it ended up being more disturbing to the lady that actually allowing him to sit next to her.  This is an example of his social issues we still haven’t worked out that lead to much frustration on everyone’s part. 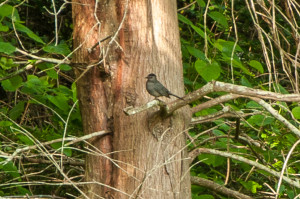 I want to BE that lady when I am older, but I am not sure I am going to make it that long.  I have had this feeling for some years that I am going to get sick and pass away before my children are grown, and I can’t tell if that is just some crazy pessimism, fear, paranoia or a premonition.  It drives me, though, to still commit to having the experiences I want to have, and having them now instead of waiting.  I would rather die saying to myself “well, at least we did get to High Island” instead of wishing we had gotten there, even if it ended up not being everything I wanted it to be. I wanted to see a hundred types of birds and I only saw about twenty, but you know, if you look at e-bird reports from other birders there, the species lists range from 2-63, with most reports being between 15-25, so I think I did all right. 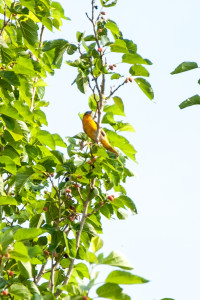 In the end, maybe it was just enough, because as we drove away, heading through Anahuac Wildlife Refuge and stopping at Smith Point, my overwhelming feeling was happiness.  We climbed to the top of the observation tower at this spot that is famous for being a good place to watch raptors in the fall, and I felt such peace up there, watching the wind blow and the waves slowly make it to shore, and I feel like this will be an image I carry with me, like my husband says he has carried with him for years since hiding and maintaining a geocache out here.  I will never forget the way the shorebirds called to each other at the Rookery, and how exciting it felt to see some of those more exotic birds that I did find, like the Baltimore Oriole and Summer Tanager.  We had a great time exploring, even finding a fun new restaurant on the way home, and overall, it was a very positive experience that I hope we can draw from and experience again another year. 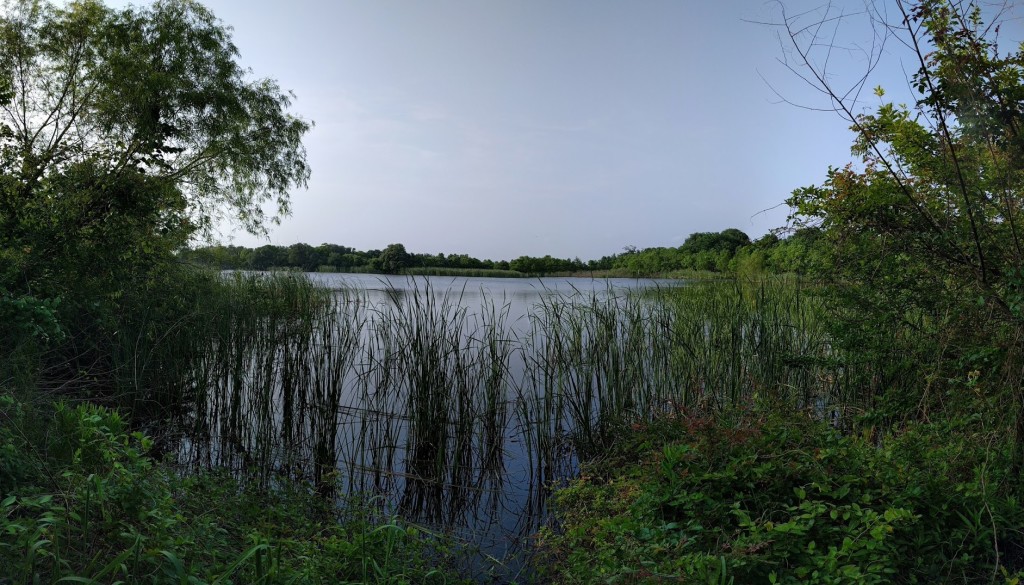