It’s Jason’s fortieth birthday, so I let him choose our weekend activity. He chose to take us hiking along Mason Creek, where the paved hike and bike ends at a trail that enters George Bush Park.  This is what is great about us – we share the same interests.  I would have chosen to go hiking today, too!

We were rewarded as soon as we got on to the trail with a sighting of something rare for the area.  A juvenile Brown Pelican was hanging out in the creek.  I remembered something about this, and checked my birding forums later to see if this is where I heard about this bird.  Five days ago, a birder on my forums had noted this guy around the same place.  Several folks riding bikes and walking dogs along the Hike and Bike stopped to take a good look at this interesting fellow.  At one point, he flew off low along the creek, and I marveled at his wingspan. 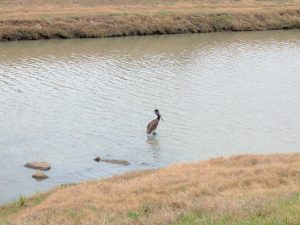 Jason wanted to share with me a nice section of the forest, just past the locked pipe fence and the water treatment plant, where he had enjoyed a nice walk the other day.  He thought it seemed rather birdy, but today (later in the day),  it was a little less so.  I did see some of the common birds of the area during our walk: herons, egrets, robins, cormorants, starlings, hawks, some house sparrows and an eastern phoebe. 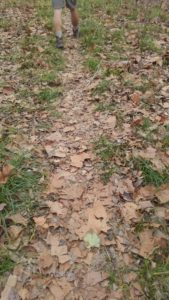 Mostly, though, I was looking at the ground.  There were a lot of fall leaves on the trail, and I realized I was concentrated on feeling the trail under me, to avoid pain to my ankle that I injured so badly back four years ago now.  Last night I took a long walk with the dogs, and as is common when I do that, my ankle was sore this morning and I had a bit of a limp and was trying not to put any strain on it by having to absorb shock of stepping on covered tree roots.  Jason was surprised because he didn’t think this trail was bad at all, and it wasn’t really, but there were a few roots here and there lying under the leaves.  I also really enjoy watching Jason’s legs walking ahead of me on the trail.  His legs are one of his best assets, haha! 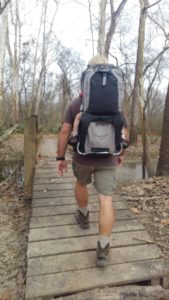 Watching the trail in front of me so intently did make me think about this conversation I had with my kids when we were camping in East Texas recently.  I was asking the boys what they think about when we are hiking.  I think it is interesting to consider what is going on in other people’s mind space, particularly since there is sometimes times where we are all just quietly walking along.  My middle son says that he either thinks about the video games that he plays or he is looking around at the scenery.  I asked him what drew his eyes when he looked around, but he didn’t want to elaborate on that.  My older son said he doesn’t think about anything – that his mind is blank during hikes.  Then he shared with me some insight on the “Nothing Box” that men have in their heads.  I can’t imagine this but I know men are different than women in this regard.  A Nothing Box? 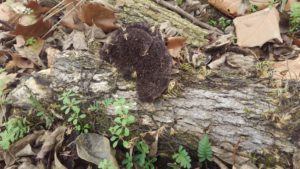 I had shared with my boys what I think about.  In some ways, maybe my mind is doing what both of theirs are kind of doing, because when I hike, mostly I am looking around at the forest and just enjoying being present in the moment.  My eyes seek out unusual shapes and colors, though, and I feel a joy in discovering neat little places.  As in this picture above, my eye is most pleased by finding neat little fungi and tiny little plant life up against wood or stone piles.  I also keep my eyes out for heart shaped or colorful leaves, little mosses, neat little stones, things like that.  I mostly spend my time focusing on the three little feet in front of me, making sure I am not going to fall down or trip on something.  I wonder often as I hike about how I would feel about doing this daily for months, like on a long distance hike.  Would I spend the entire hike focusing on those three feet in front of me?  Would I get tired of looking for fun little aspects of nature to marvel over? 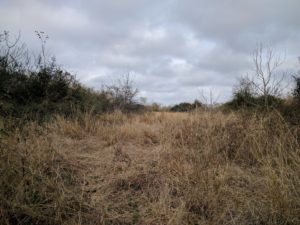 I also look around for signs of wildlife.  In this case, today, I smelled feral hog at one point along the trail, saw prints of hog and deer, and then we saw this flattened down sections of dead grass that looked like the hogs had been there as well.  This section was on a part that was called the Hill Trail on our screens on our phone, but did not appear to be a trail anymore, or at least a trail we wanted to try going down today with a baby on the back and shorts on.  We heard some birds, mostly robins, but also hawks going at it above the trees across the creek.  We saw a turtle sitting on a rock in the creek, and heard a fish jump in a smaller branch of the creek as we walked past.  There was a man who had biked over, basket on his bike, and who was now fishing from the creek, and there was another man with two dogs, and those are the only people we encountered once we got into the forest section. 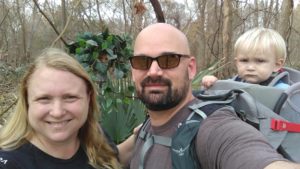 We also found this fun geocache, behind us in the picture.  Under the face is a cap that you open to get the log out to sign.  We found another one on the bridge on the Hike and Bike near where we entered the path, behind the elementary school where we parked that has a great playground for little ones and a nice little track.  All in all, we walked close to three miles this day.  I think I would like to come back to that area often.  It is a nice little refuge from the world that is not far from our house.