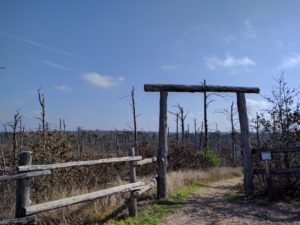 It’s a crisp February morning at Bastrop State Park, and our family is clustered around a park host named Ann with a dozen other explorers, listening to the story of the park’s recovery from the devastating fire of 2011.  It is Ann’s first day in the role of interpreting this story, and so she has assistance from the former park hosts, Joann and her husband.  She also has assistance from her children, an eleven year old named Charles and his younger sister.  She checks her handwritten notes a few times to make sure she is getting this story right, but seems to have it down. 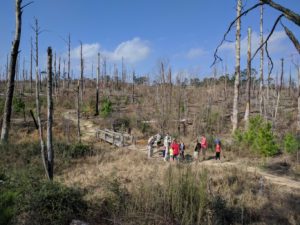 The story starts at the park’s playground, with a display of images from the fire and explanations of how it started.  The rangers managed to save all the CCC structures except two scenic overlooks in the park, and two people lost their lives in a fire that ranged over a total of 34,356 acres.  During the walk, Ann explained to us the difference between primary and secondary succession, and why this was an example of secondary succession (not all of the soil was lost). 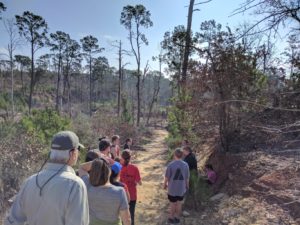 She pointed out lichen, and told us a clever little story to illustrate to us the symbiotic relationship between the two, something about algae being a great cook and fungus having an empty house and no one to cook for him, and together they built a beautiful relationship that grew a foundation, and that they were “lichen” each other.  Basically, what we learned is that lichen is important to the recovery of a forest, because over time, it breaks rock down which helps to form soil.  The lichen was a good sign that the ecosystem was returning, as was the appearance of insects, who were followed by birds as the first rungs of the ecosystem moving back into the burned forest. 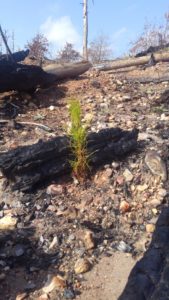 We also saw the little saplings that were planted as part of the effort to replace the burned forest.  The goal was to plant two million trees, and by the end of this year, the park service will have reached the goal.  There have been hundreds of volunteer hours logged to reach that goal.  An interesting fact that I heard Ann talking about was that the Lost Pines were actually a particular type of Loblolly Pine, and that all the seeds, held inside the pine cones, were destroyed in the fire.  However, luckily, Texas A&M University had been studying the difference between the Lost Pines Loblolly Pine compared to those from the Northeast, and just happened to have some seeds that they were able to grow in a nursery and contribute to the replacement efforts for this forest. 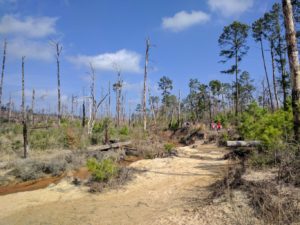 Along the way, my sons talked to Ann and her son Charles, as well as some of the other hikers.  Charles seemed to really like my sons, and we were curious about their story, as we learned that Ann and her family were a full time RV family and home-schooled the kids.  They moved around every 4-6 months to different state parks and the parents volunteered at the park in exchange for reduced or free site rental.  They also had an RV repair business and sometimes her husband got part time jobs in the little nearby towns for supplemental income.  This was interesting to us because Jason’s dream is to live a life on the road, to be full time RVers. 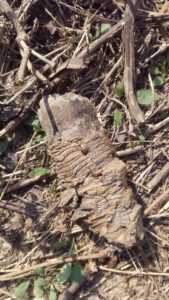 At the end of the hike, we stopped to talk about a competing relationship between a pine and an oak tree, and then the leaders opened it up to questions.  I really wanted to know more about what the full time RV life was like.  Jason and I enjoy traveling together, but my dream was always to have a big ranch and lots of animals, and our dreams seem to compete with each other’s (although we aren’t any closer to either of them).  Joanne said you basically have to be best friends with your spouse, because you are sharing a very small area of space and often end up working with or near each other during park host volunteer jobs.  Ann talked a little bit more about what some of the volunteer jobs were like that were available, and how she and her husband needed to be best friends as they lived and worked in small spaces together. 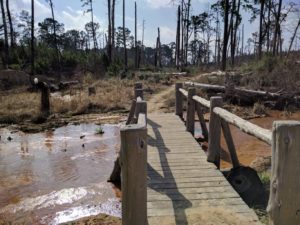 I thought about this during and after our hike, what that would be like.  Jason and I had just come from a morning of sniping at each other, and truthfully we had been working more like that oak and pine than the algae and fungi.  I told him that really we were too busy being in competition for who was the biggest martyr in the relationship that we had forgotten that we needed to, or used to, or should have a more symbiotic type of relationship.  After all, we were the same two people who moved in together because he had an empty house and no one to cook for him.  Three kids and seven years, and we have to work a lot harder at happiness than we used to when it was new.  That is probably true for most everyone, though.  Nothing stays in the honeymoon stage.  So the question I pondered is, would less or more space make us better or worse together? 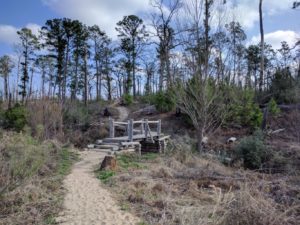 On the way home, we took a detour through La Grange to stop at Monument Hill State Historic Site, and we enjoyed winding our way through the neighborhood leading to and from.  The houses seemed to have so much space in the neighborhood, but yet still retained the community aspect.  Both of us were separately dreaming the same pipe dream- that maybe I could work at the primate facility in Bastrop, and we could live here.  We shared this thought, and both of us nodded at this mutual little dream we cooked up.  We had bright little dreams like this when we first got together while geocaching together and finding a nice little piece of property, and seeing us still dreaming them, I think maybe…maybe we still kinda lichen each other after all. 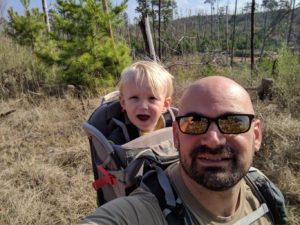 One thought on “Bastrop State Park: Lichen What We See”