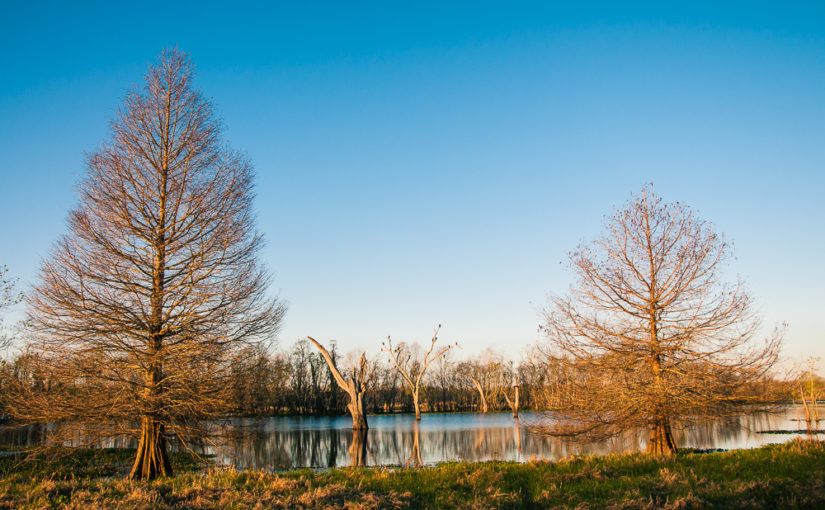 This day, the destination was Elm Lake.  Jason decided to come along (and bring his camera), which meant we were a little later than expected, but also that we could capture a little bit more of what we were seeing.  Janey was already counting birds when we got there, and I joined her at the wildlife viewing platform while Jason got Sebastian situated.  We all set out to look for the Vermillion Flycatcher, who did not show himself this morning, before turning to start around the lake on the eastern edge. 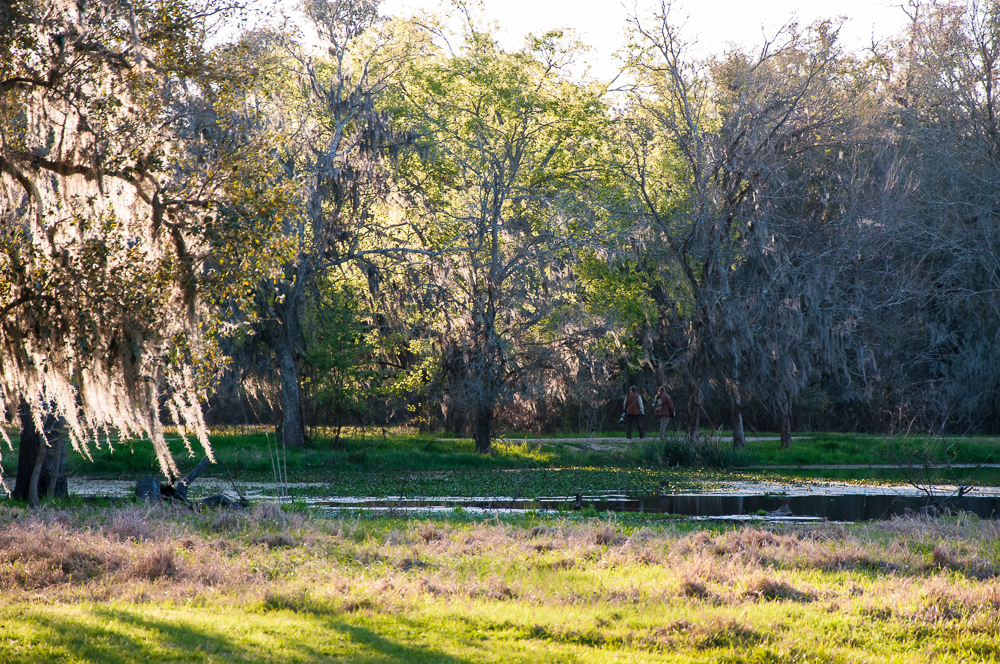 It ended up being a short and cold morning of birding halfway around the lake before Janey needed to leave.  It seemed like it was going to be a nice day, but a chilling wind picked up as we walked.  Mostly, the birds that we counted this morning were the usual suspects: cormorants, ibis, whistling ducks, herons, a pair and a trio of blue winged teal, egrets, coots, moorhens, grebes.  A fun find was an immature Little Blue Heron, who was actually white in its adolescent plumage.  New for my yearly list this morning were the tree swallows, a dozen or more of which were flying in slow circles around the lake. I also had not found a Tri-Colored Heron yet this year, so I was able to check that one off the list.

After Janey left and it was just the three of us, Sebastian was unusually sleepy and wanted to be held.  Jason carried him in his arms while I carried our packs.  For quite a time, we sat on a bench in the sun at the Pilant Lake trail intersection, just watching and listening to nature.  A gator floated to the top of the water and then submerged again.  I took some pictures of a coot that was hanging about, and Jason taught me about how to use the histogram to determine color correction.

I had wanted to go for a longer hike this morning, but since we had to carry a sleeping toddler, we decided to just head back to the car.  On the way around this western side of the lake, I started to see a little bit more birds.  I recognized a little call of a woodpecker, and looked around to find a Yellow Bellied Sapsucker feeding in the trees on the left side of the trail.

Sometimes there are some good waterfowl to be found in New Horseshoe Lake where the Elm Lake Trail starts to curve back to the parking lot, but this day there were only three ibis in there.  As we walked back, I saw quite a bit of bird action in the trees along the path.  Almost everything I set my sights on turned out to be a Yellow Rumped Warbler, the bain of all local birders it seems, but I did catch a sight of something that looked different, and took a picture (since I now was the holder of the camera, since Jason’s arms were full of kid).  Looking at the picture when we got home, I thought maybe it was a kingbird, but Janey thought it was actually the female Vermilion Flycatcher.  This was close to where the male has been hanging out, so I guess that would make sense. 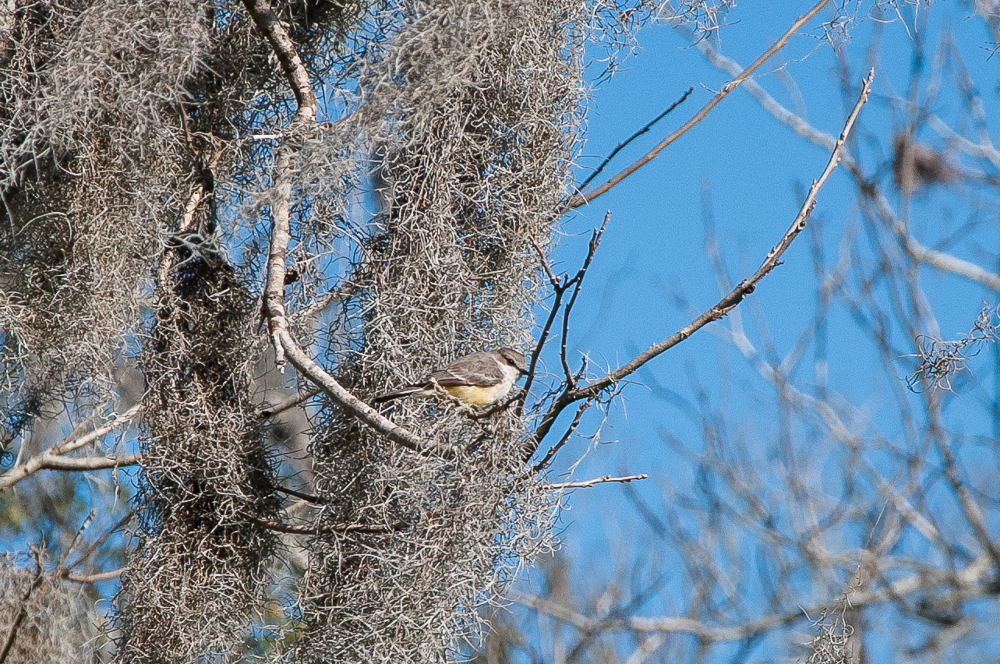 As we were loading up the car, I saw a big flash of grey feathers, and went over to investigate.  I was excited to catch sight of a big raptor in the trees, and slowly approached the tree to try to get a good shot.  This is the best shot I could get before it flew off, but it was enough to identify this as a Cooper’s Hawk (good sized one, in my opinion). 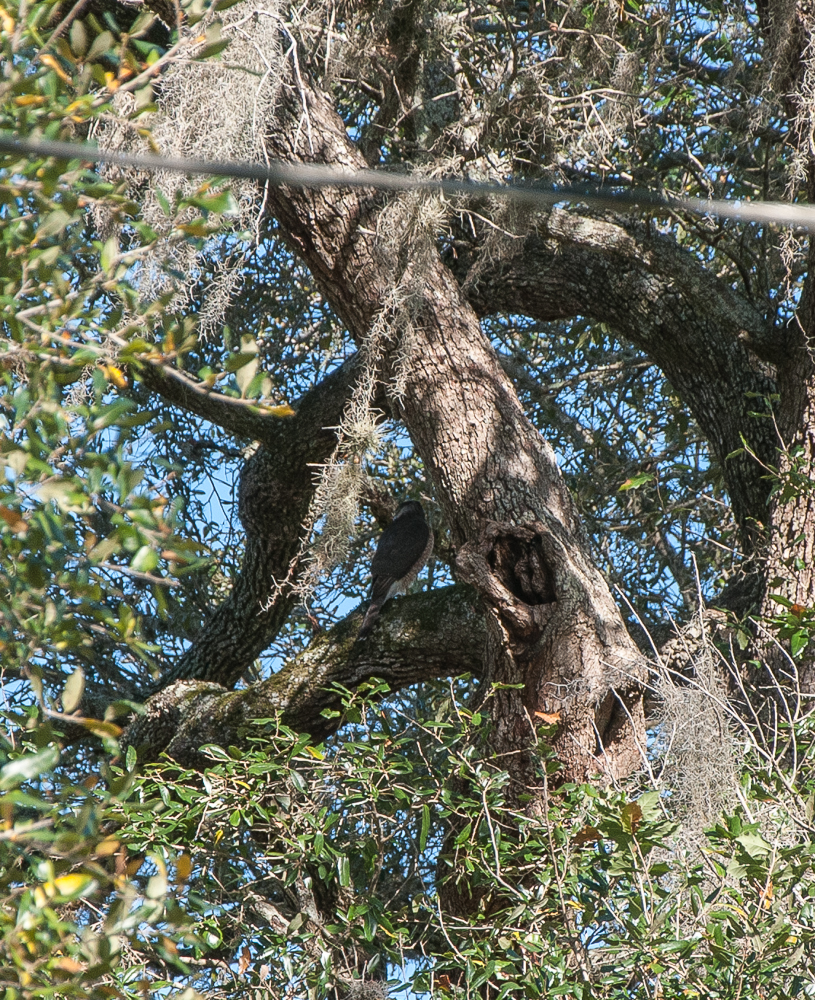 After this, Sebastian was now awake and wanted to play.  He asked us to take him to a playground, but the one at the park is not great, so we compromised on going to the Nature Center instead on the promise that he could see a baby alligator.  Lucky for us, there was a volunteer with a baby alligator already out for touching.  Sebastian was timid at first, but eventually touched the baby alligator, along with a great many other items in the nature center. 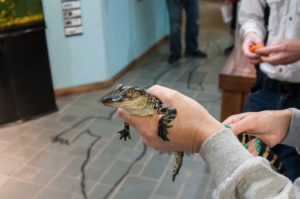 We explored bones, teeth, feathers, shells, nests, honeycombs, and marveled over pictures and specimens of wildlife and insects.  He went through the nature center about five times.  His favorite activity of the day was pressing the red button next to the carving of the owl, which played owl calls, and then turning to us and saying “doggy!”  Apparently some of the owl sounds are similar to dog barks to Sebastian.  We tried to get him to go on the volunteer-led Creekfield Nature Walk, but he was interested for all of about five minutes and then ran off back to the nature center.  After several attempts, we finally got him on to a trail to look for more birds.  I did manage to see a blue-headed vireo, a bird many folks on the bird walk in Kleb Woods that I went on Wednesday were seeing but I didn’t actually sight myself so therefore did not count.

We decided to leave the park because Jason was getting hungry and Sebastian’s antics were becoming intolerable to me.  I thought Jason was taking the less direct route home, and his agenda became slightly more clear to me when he explained he had a craving for a bbq baked potato, but he told me where he was going, he mispronounced it so that led to some confusion and then some debate on how to pronounce “Schulze’s”.  Turns out I was right, and I am putting that down on record because he hates to admit that and it doesn’t happen very often.  Best BBQ in Rosenberg, and on that, there is no debate between us.