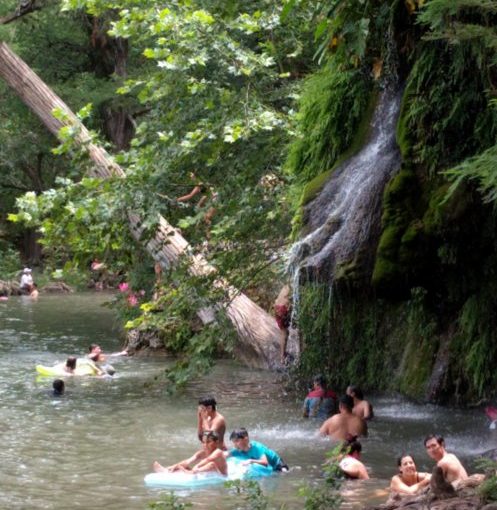 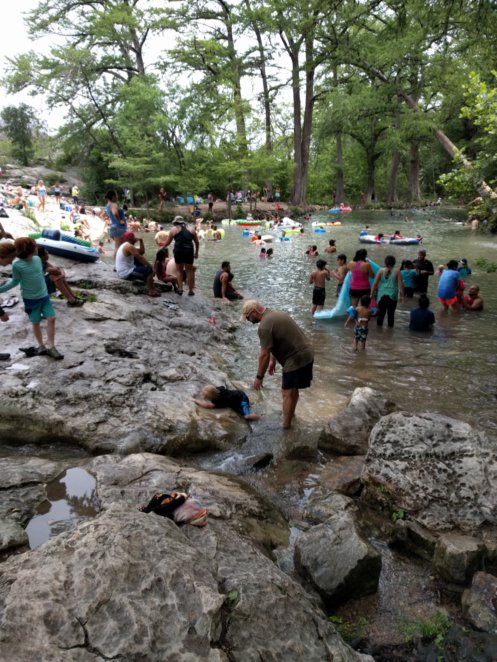 There are slick spots.  There are sharp spots.  There are shallow parts and there are deep parts.  In order to get to some of the good spots, one might have to walk carefully over algae covered rocks, delicately walk across a balance beam-style concrete ledge, walk across fine little pebbles that cut into your feet, and dance around cypress tree roots.  You might have to lay down on your belly and climb up along rock faces, scramble a bit for good footing, which is what is going on in the picture above (no toddlers were injured in the making of this picture, although it seemed likely at some points). 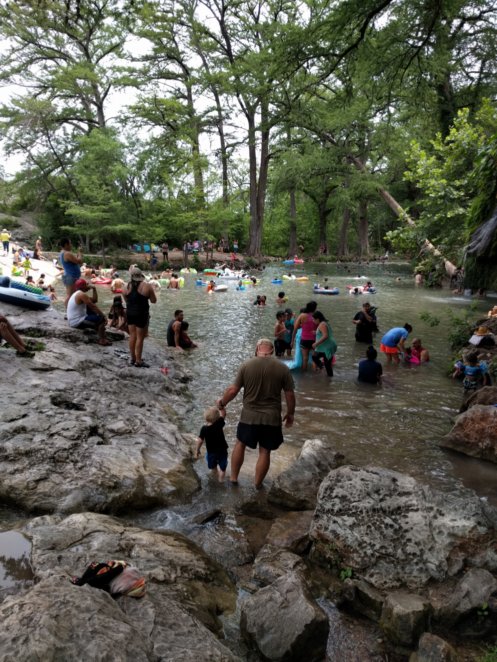 In order to get in the water, you might have to carefully feel your water across the roots, and perhaps suddenly slide into spongy vegetation on the river bottom.  Or perhaps you might be standing on a rock ledge, then take a step further and sink into an abyss of unknown depth.  Perhaps, if you are very brave, you might get into the water by swinging off a rope from the top of the ridge, after having to climb your way up there along rocks and stand in a long line of others trying to prove their mettle.  If you are interested in a further challenge, you might enter the cold river by throwing your body off the ridge, slightly higher up.  The fact that we didn’t see anyone get injured this way is a testament to how deep the water is in certain parts.

For those in the 5-35 age range (with no physical handicaps), this place is great fun.  The kids in our group had a great time.  The two of us who were parenting a toddler were experiencing some stress trying to keep him safe. 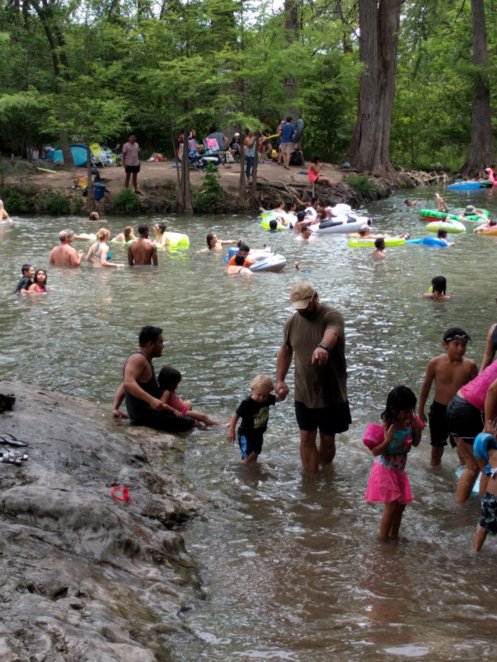 Initially, I took him down to the river access area on my own, while my friend and her husband where with the older kids and my husband was still getting dressed.  I went for the obvious choice on where to enter the water – the first area you come to as you come down the steps on the far left, which looked fairly shallow.  I even asked some folks how deep it was and they said it was shallow there.  I got in first, and then stepped back a foot to allow the toddler room to follow me.  Only, it turns out I had been standing on a ledge that only extended about that first foot, and suddenly I was flailing a bit as I sunk into questionably deep waters.  My toddler, showing some good sense here, stepped back and said “No like river!” and then refused to come in, even when I got back in control and on the ledge.

After this, we tried the swimming pool area.  The pool is fed by the natural springs, and is very cold!  It has a gradually increasing depth, being about 2″ deep on one side and possibly 6-8″ deep on the other side.  On the deep side, kids lined up along the rocks forming the back ledge and jumped into the water, sometimes one at a time and sometimes in a group.  There are two ladders into the pool, and other than that, the whole surface is straight concrete and rock base.   We tried to cajole the toddler into the pool, but he dipped his feet in, felt the temperature, and said, “I no like pool!”. 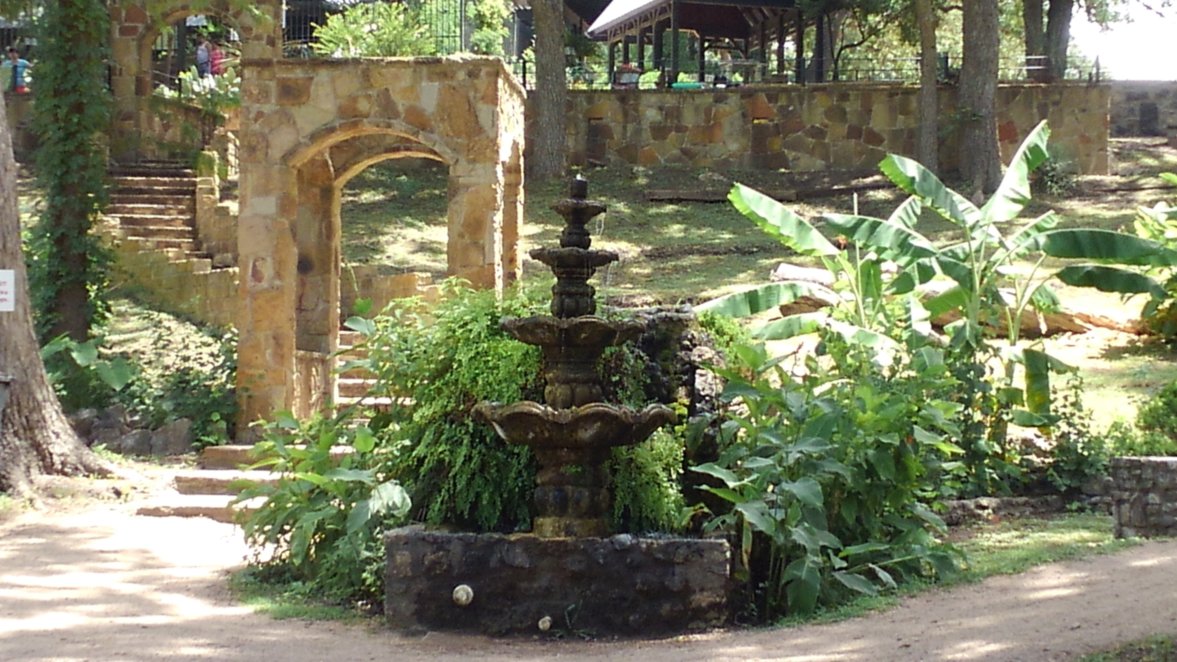 We eventually got him in both places, but only for short times. A nice picnic was had by all parties. Some resting might have occurred by various parties while I was chasing the toddler around the grounds. He made friends with a three year old girl in the gazebo, although he might need a little work on his game (she had a scratch on her face, and his only lines he could come with were “Hi” and “You have owie on face. Are you okay?”). We admired the interesting features on the stone benches and planters (squirrels harvesting acorns and lion’s faces carved into them). We experienced all the grounds, including the incredible butterfly garden at the entry way when we arrived.

It was a very pretty place, although quite crowded on a summer Saturday.It was a good place to experience, a place we would go again, but probably not until several years from now, when little Sebastian is not so little and the place seems a little less fraught with danger. 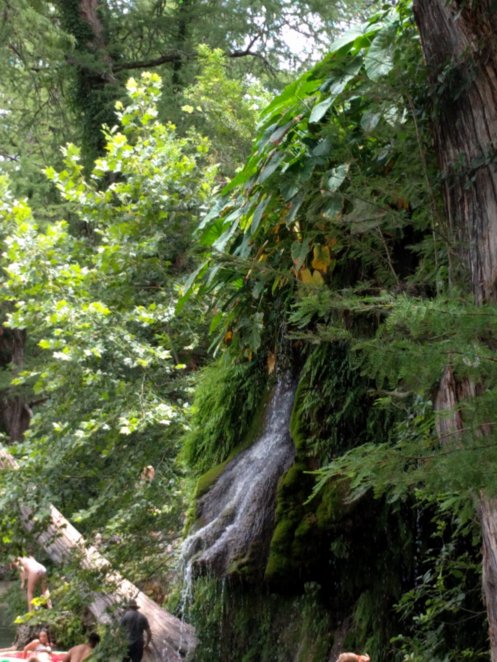 One thought on “Krause Springs”