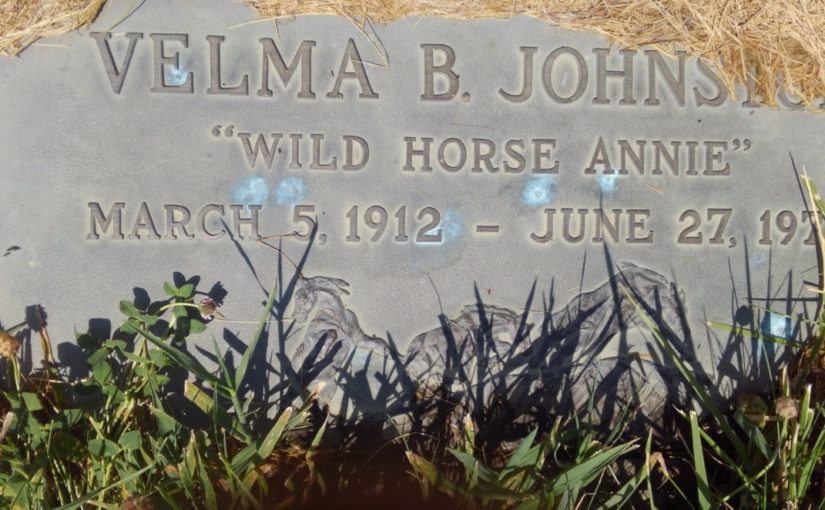 It was a crisp July morning, and I was counting steps in the Mountain View Cemetery in Reno, Nevada.  Or rather, I was counting plots.  Forty six plots down from the end of the row, and about five plots back from the road.  This is what the guy at the office told me, when he went over the cemetery map with me.  He had highlighted the road and the closest tree to use as a landmark, and in the blank space at the top of the page for the person’s name to be visited, he wrote “Wild Horse Annie” instead of Velma Johnston.

“Everyone knows who that is,” he said.  Everyone around here, probably.

It was a little harder to count the plots than what I anticipated.  In this cemetery, there were no headstones.  It was just plot markers, some covered over so that I had to use my shoe to clear the weeds to be able to read them.  There were some kind of animal feces everywhere, was literally over almost every step or near every plot, which surprised me.  It looked like a small dog had free run of this place for years without pickup, or perhaps it is some kind of wild animal with dog-looking scat.  It took me some time to finally find it, the grave of my idol.

I sat on the grass beside the plot, paying my respects.  I pulled out the poem I had written for her twenty years ago, after reading a newspaper article about the Bureau of Land Management turning a blind eye to their own people doing the very thing that was prohibited in the legislation Velma helped to pass: adoption of mustangs in order to sell them to slaughterhouses.  I want to say that the article at that time stating that some BLM employees were adopting up to 100 mustangs a year to turn around and sell for meat on the hoof. 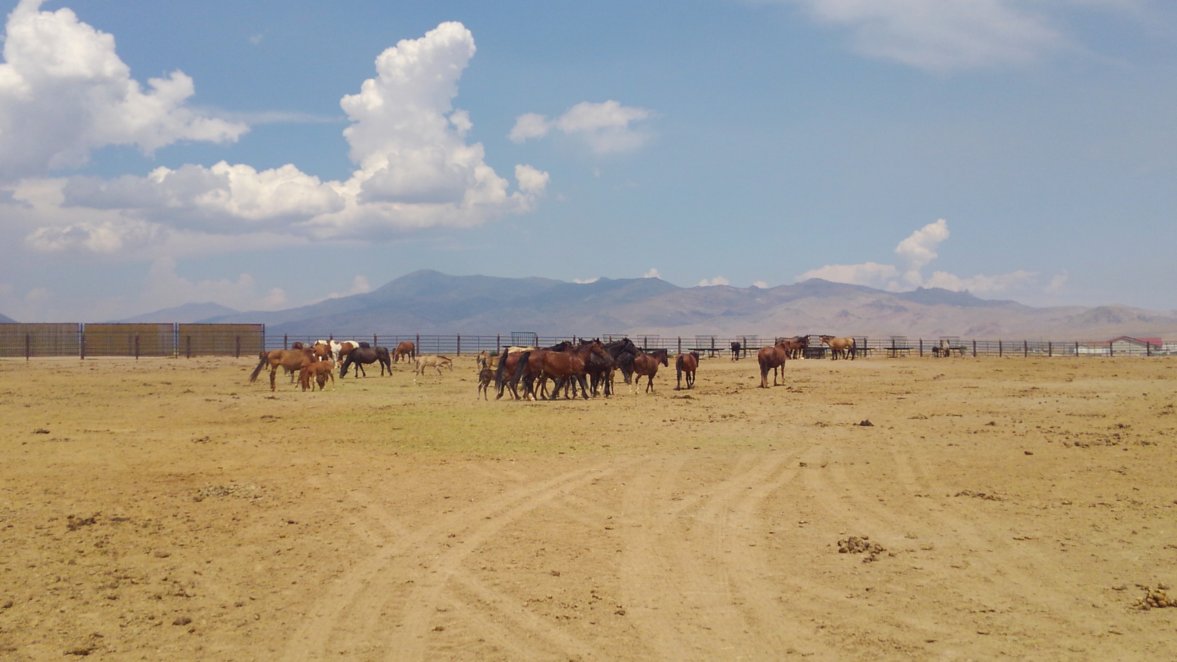 Now there is a different kind of battle being waged over the mustangs, and as I read the poem to Velma’s grave, I realized I should have made some kind of nod to that in this poem as well.  Honestly, I thought I would be overwhelmed with emotion reading the poem to her, but when I was done, it felt pointless.  I did not feel her spirit here.  I was just reading a poem to a flat plot stone on a hillside cemetery. 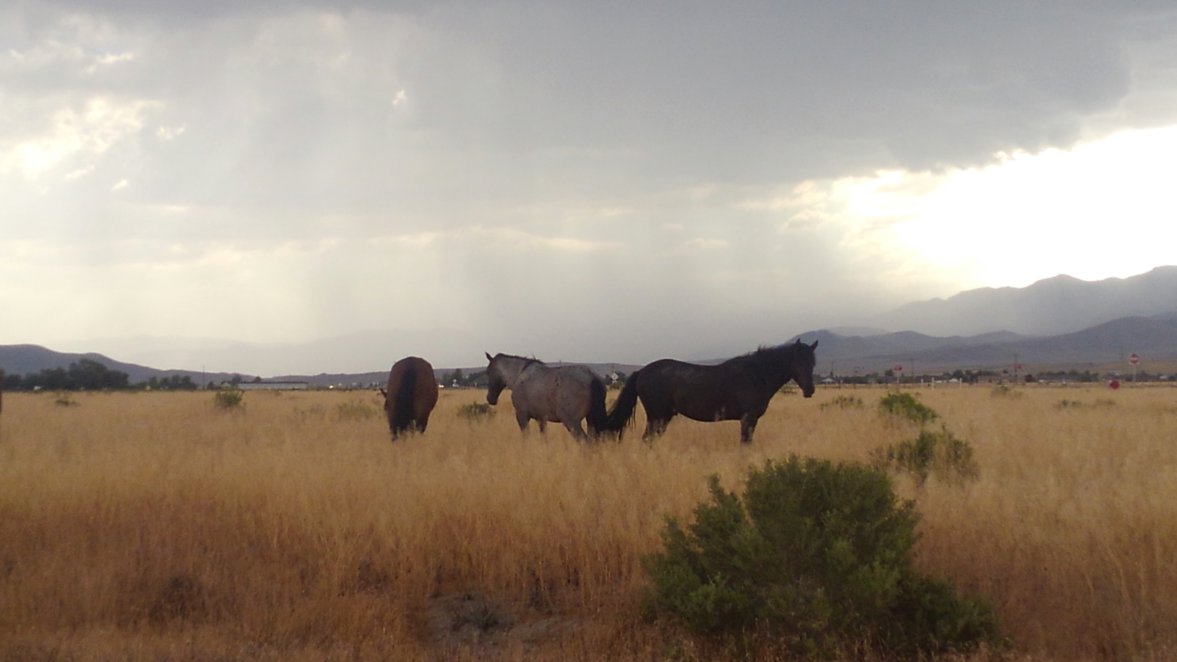 After this, I got in my rental car and took the Pyramid Valley exit off of Highway 80, heading towards the Palomino Valley National Wild Horse and Burro Center. The landscape along the way seemed very familiar to me.  Perhaps it used to be the way home when I lived near here. 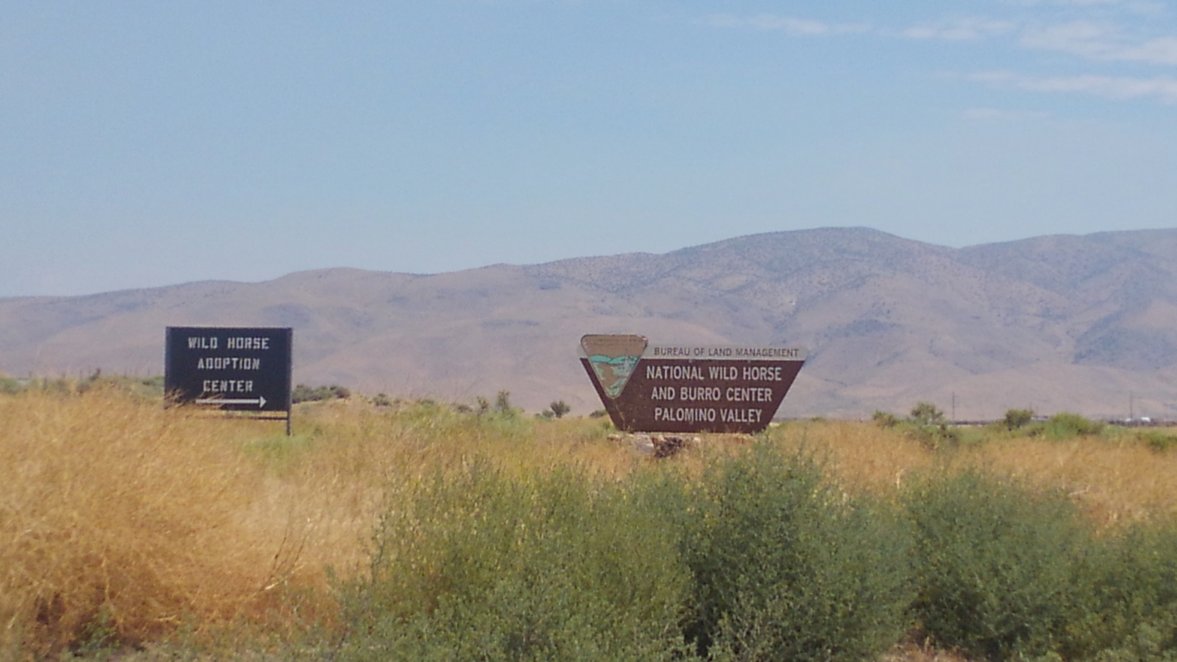 I think I was expecting something fancier when I pulled up to the holding facility.  There was an area at the front entrance that had three information boards posted.  A big building containing hay and some equipment was right inside the fence, and there was a sign on the entrance gate that said “Check in at office”.  I went inside the brown office building to the right of the entrance gate.  There were a handful of offices, but just one person appeared to be there, a long rangy cowboy type of guy.  He got up from his desk in a back office when I came in, and I told him I was here to check in.  “You’re checked in”, he said, and waved me off.  “Can I drive around, then, and look at the horses?” He said no, I had to walk from here (although I saw two other cars that had driven down to the paddocks), and that they just ask that people be careful of the equipment and watch where they were going. 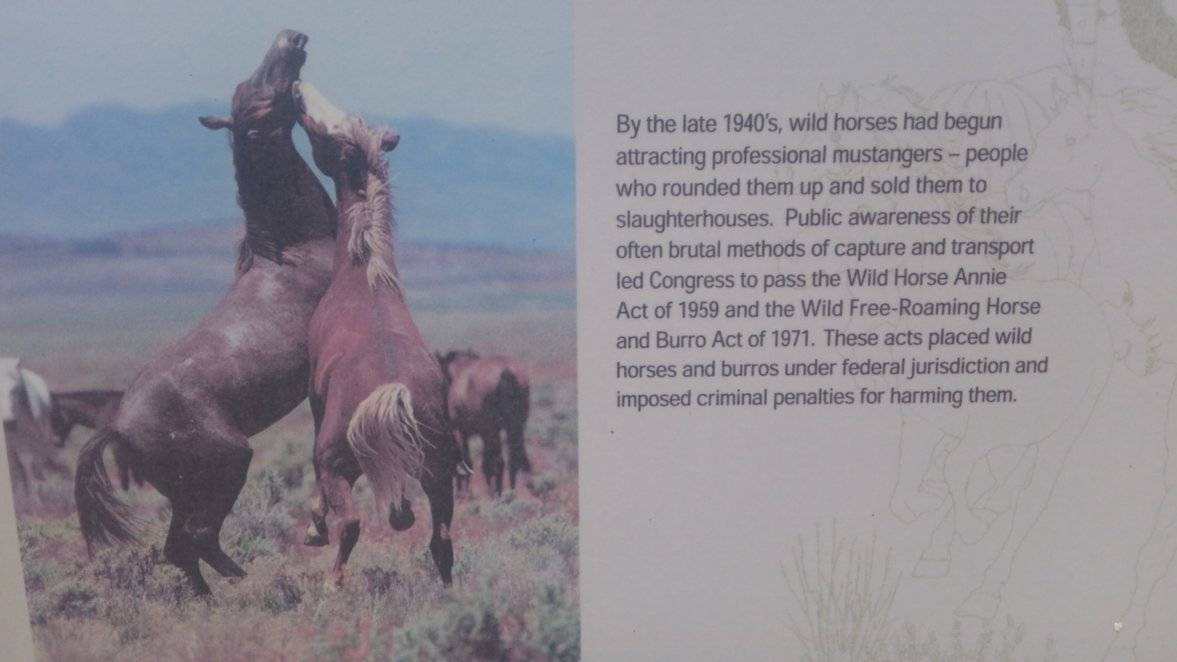 So I took a walk.  It was the middle of the day and a bit hot.  It was dry heat, and the dust from the paddocks added to my feeling of being dehydrated.  I forgot all about creature comforts, though, once I got my first look at the beautiful horses in the pens.  Pen #10 was the first one I came to, and it had mares and foals of every color.  I counted about 100 head in that pen alone.  There was another pen of mares and foals around the corner, maybe another 50, and then there were smaller pens of what appeared to be two year old mares, yearlings, one dun male (maybe a young stud) by himself.  Altogether, I saw over two hundred horses out here, but there were more paddocks further off, although they appeared to have smaller numbers.  In my estimation, there were probably close to three hundred head. 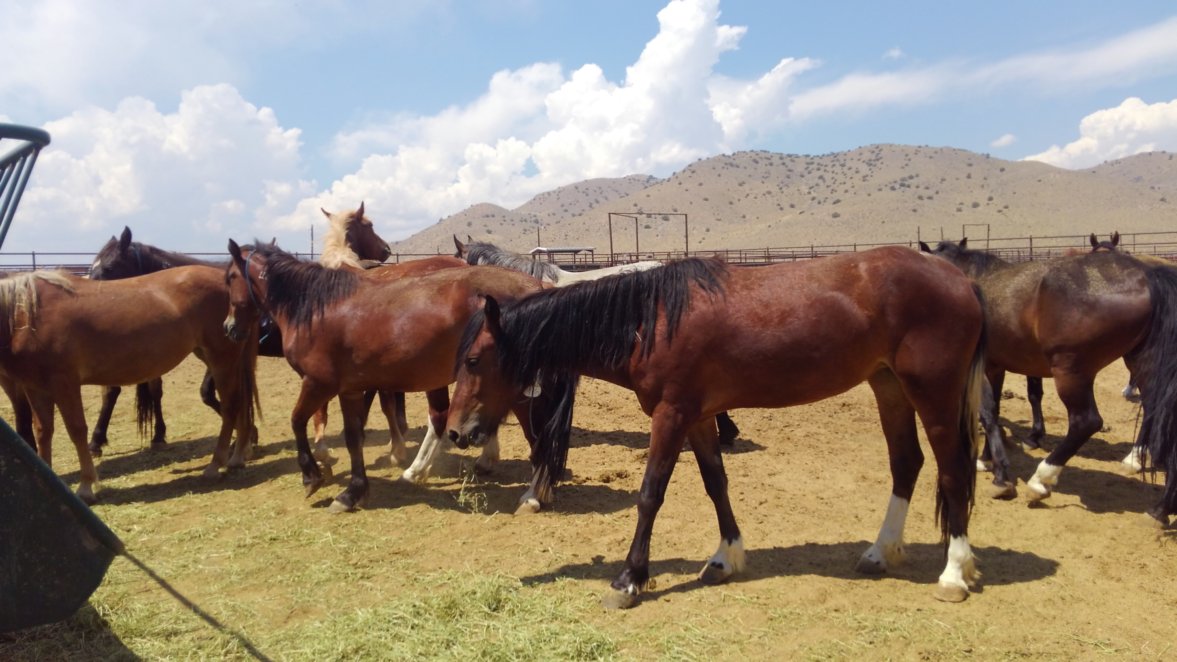 I wanted to judge for myself the body condition of these animals, to determine if the horses really were starving up there on the range.  All the animals had plenty of hay to eat here, though, good alfalfa, and I have no idea how long they had been at the holding facility.  A few animals seemed thin, but a few animals seemed fat, and for the most part, they were in normal body condition. 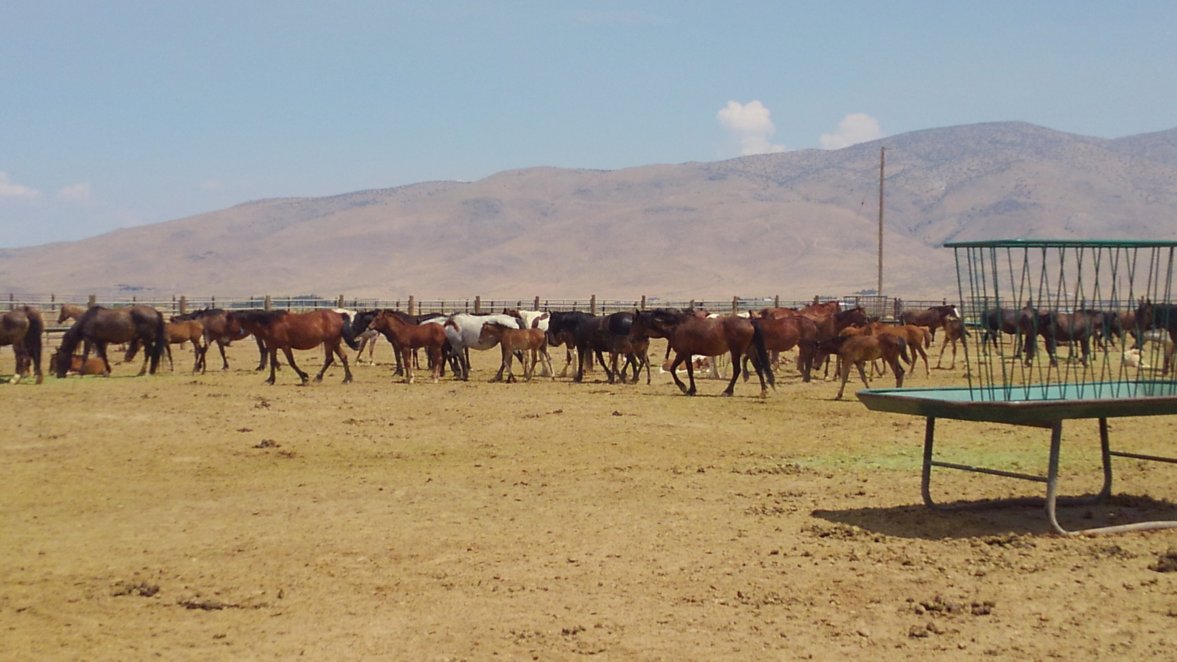 One thing that struck me about these horses was a reminder that they really are wild.  Think about how close you can walk to a domestic horse, even a mare with a foal or a yearling.  What is the normal flight distance for a domestic horse with little human experience?  These horses kept surprising me with how great their flight distance was.  For some of the mares, it was one hundred feet, and for the more brave, it might have been six, but on the average, it was about twenty feet.  If I was closer than twenty feet, like when I started to approach the fence to take a picture, they would run off to the other side of the paddock.  When I stepped past their hay manger and they caught a sudden sight of me,  I spooked the whole pen of young mares.  I sneezed once, and heard hooves fleeing the general area. 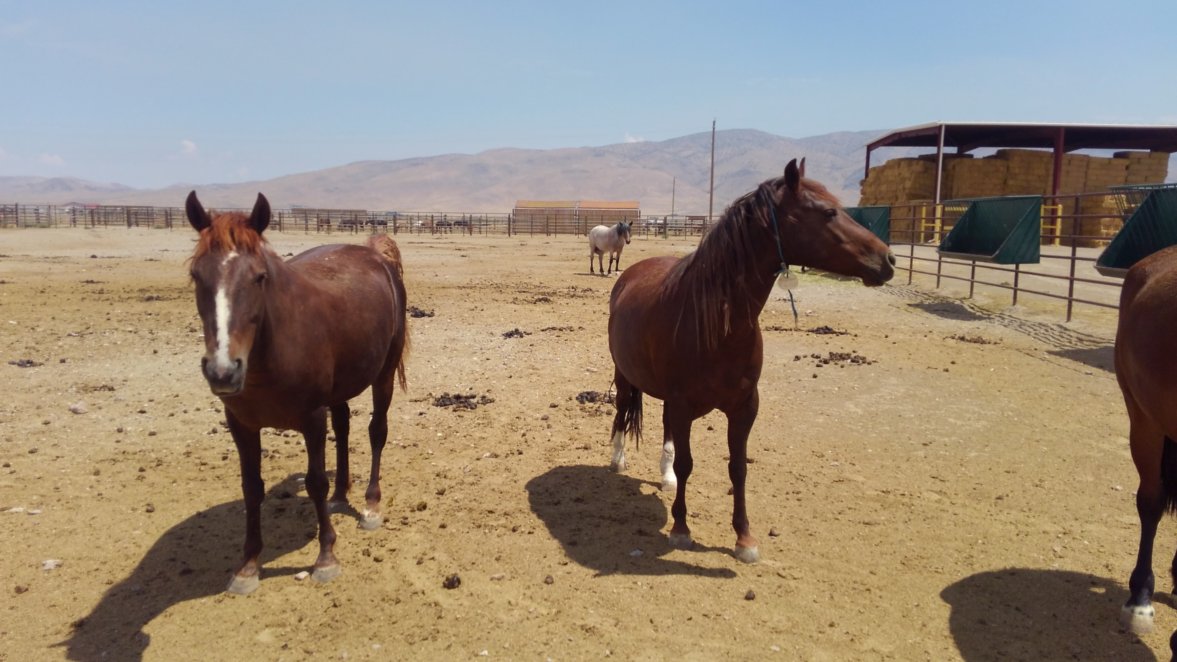 However, there were a few that really wanted my attention.  In one of the paddocks, two sorrel mares caught my eye, and then started walking briskly towards the fence line towards me, even sticking their faces out of the poles and trying to sniff me.  I did allow them to smell me, even though there were signs saying “Keep away from fences”.  I thought about how it would feel to give them a good curry, to put a saddle on their back, how they might be to ride.  They were on the small side, maybe 14 hands.  Most of the horses out there were not very tall.  One of the yearling fillies, a grey, was taller than the rest of her cohorts.  She was also very curious and she really wanted my attention.  She kept putting her face outside the fence and I really wanted to pet her, but I was a little concerned she might bite. 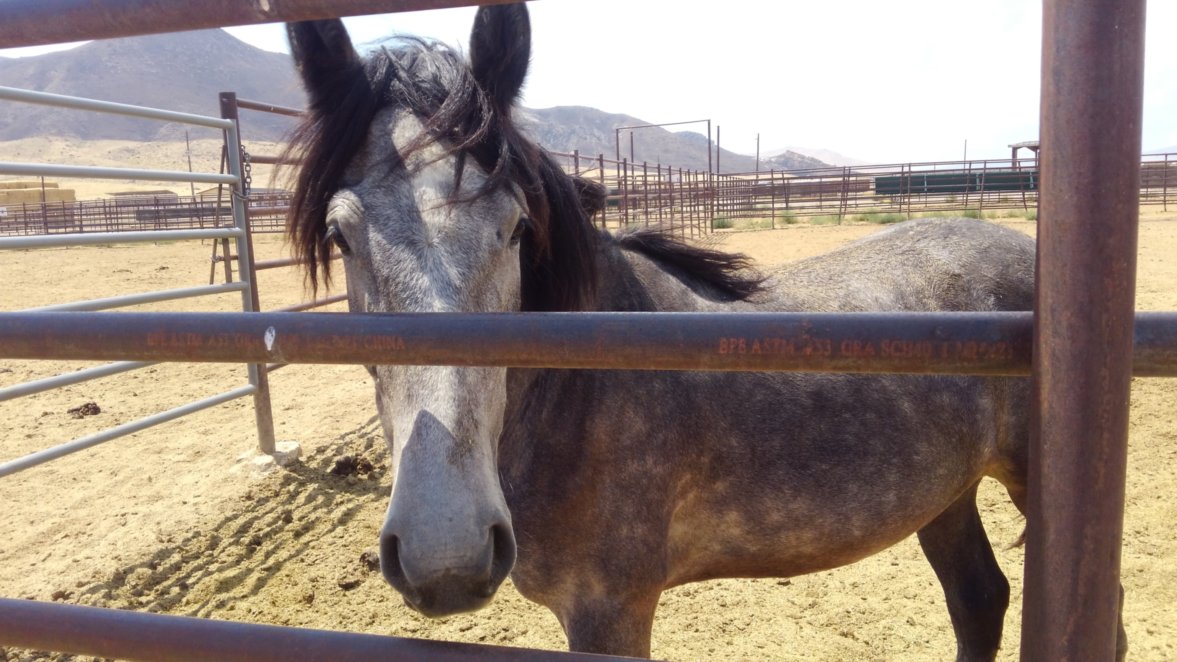 On the way out, I stopped to see the two pens of burros.  There was this baby burro that was the cutest thing I had ever seen.  It was the size of a dog, and it had this little tuft of a forelock that was blowing in the breeze.  My heart just melted, and I walked closer to get a better look.  As I approached, I heard a sound in the air, something that sounded a bit like Native American flutes and a twinkling.  For a minute, I felt like something magical was happening, but then I realized it was the wind whipping through the pipes of the corral gate.  Or, maybe this was Wild Horse Annie’s spirit.  It would make more sense for her spirit to be watching over these descendants of the Virginia Range herd that she committed to protecting, rather than that turd-covered graveyard, right? 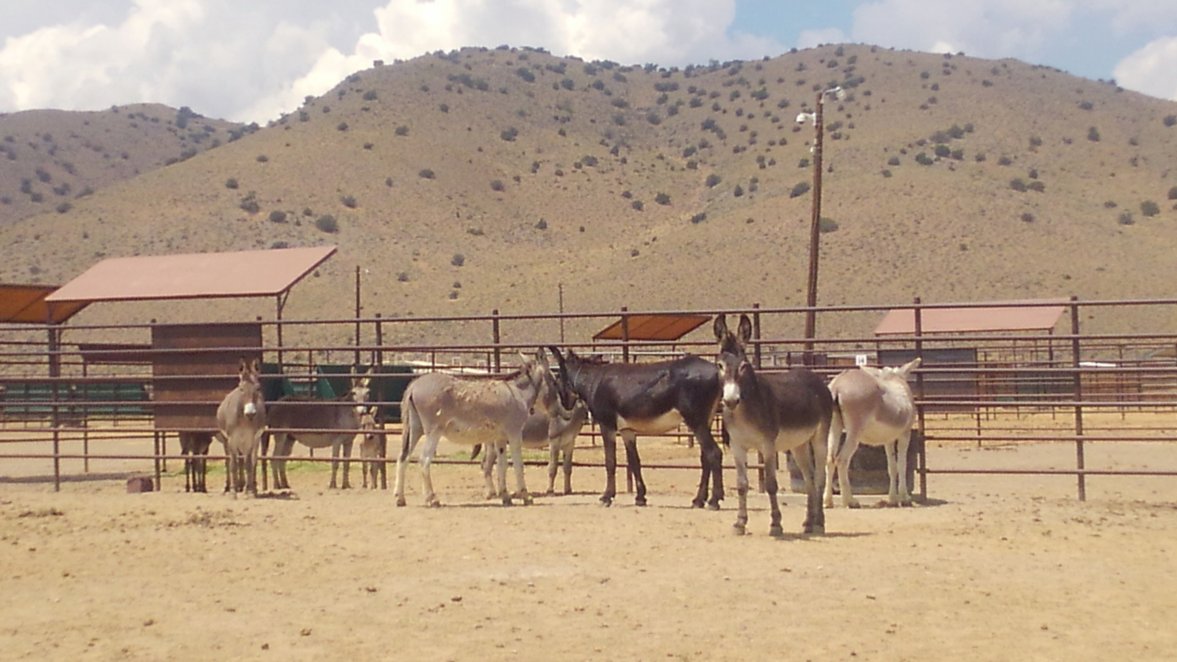 I watched the baby burro and his mom for a bit, then I walked to my car, the pipe music still in my ears and tears running down my cheeks.  I was overwhelmed with emotion, then, thinking about the House Appropriations Committee’s vote last week (July 18) to allow these surplus animals to be euthanized.  Up to 92,000 mustangs will be in danger of dying, including animals like these ones I saw today, if the Senate makes the same decision after their August recess.  I imagined that grey filly with a needle in her neck, injecting her with Euthasol.  I thought of that baby burro, dying for no reason other than there are too many wild horses and burros, and not enough range, not enough adopters.  Memories of euthanizing horses while working for vet clinics filled my mind.  Even though it could be worse – the government could be allowing them to go to slaughterhouses – it still sucks that so many can die.  I cried for that baby burro and all those beautiful horses all the way back to Reno. 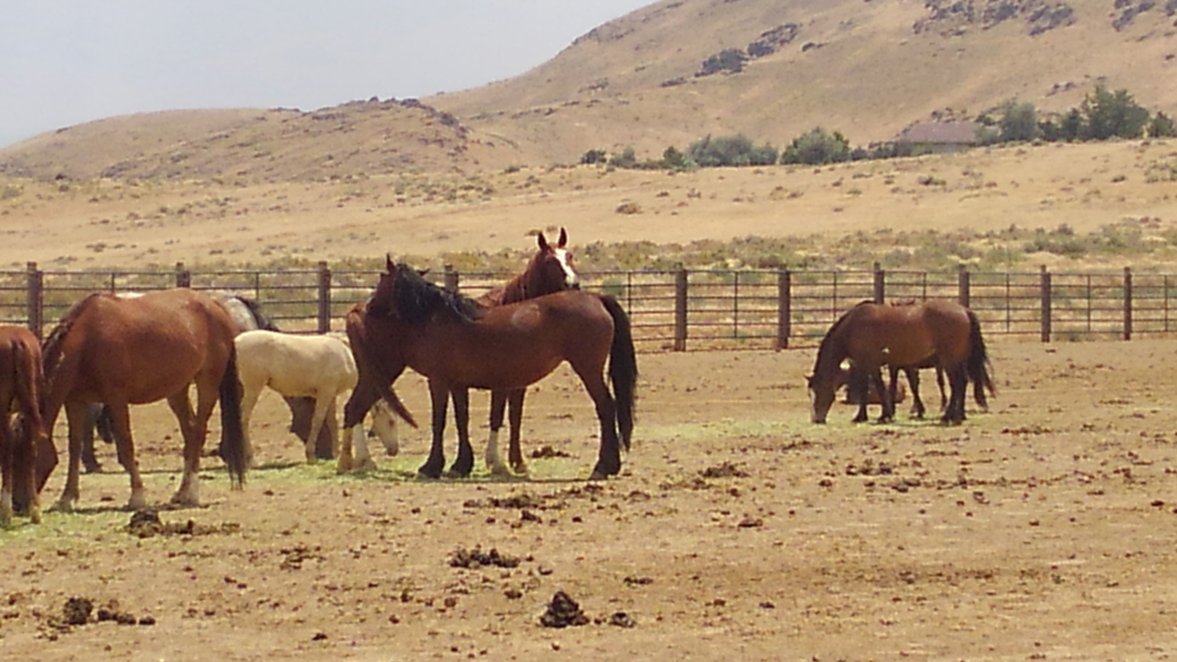 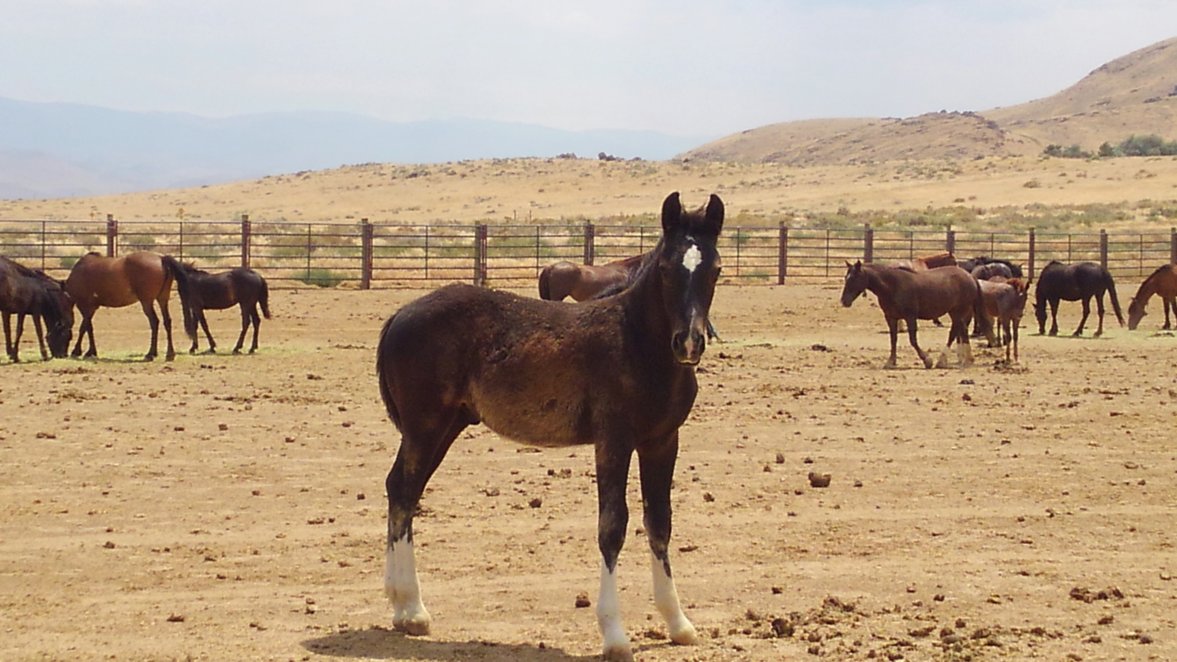 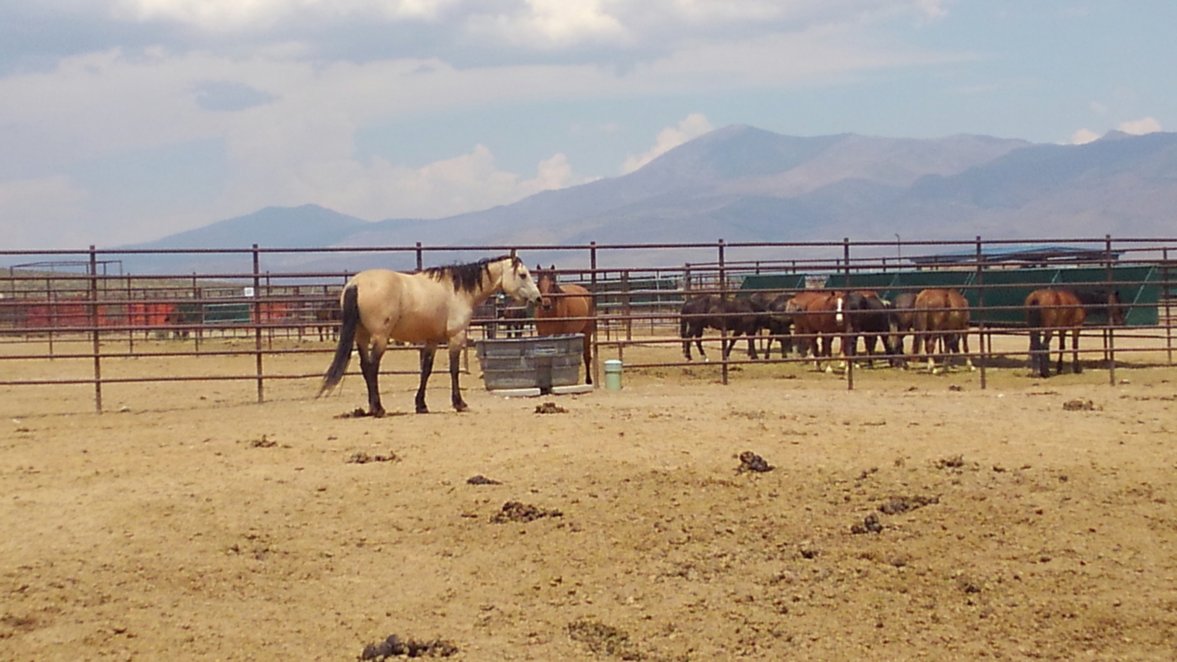 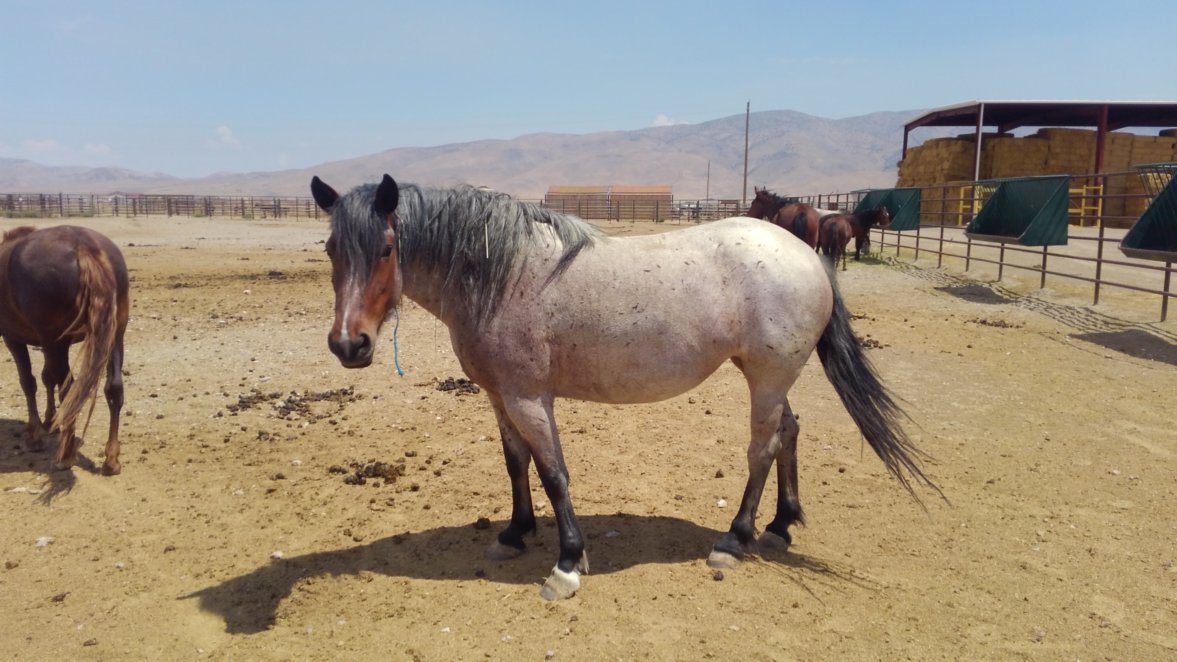 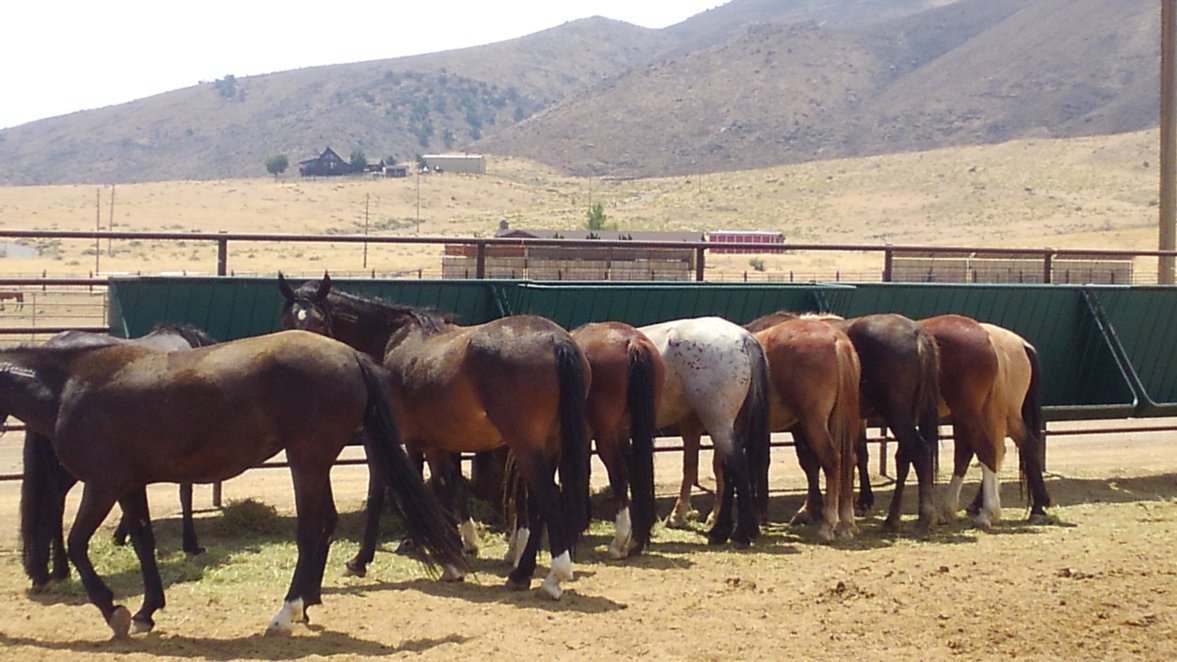 Later that afternoon, I took a drive down south to see the range and try to find some horses in the wild.  I saw about five bands of horses, a total of probably fifty animals, but I also saw a lot of range not occupied.  Sometimes we think it is the greed of the ranchers that is causing this to happen, that it is because they want grazing rights instead of allowing the mustangs to have the land.  I did not see any cattle, and the only sheep I saw were contained on their own property.  The range land that I saw was rough.  There was little grass, but a lot of rocks and sagebrush and small mountains to climb up and down from.  I realized that is probably why they needed helicopters to round them up.  The mustangs were probably surefooted out there and were used to it, but regular horses might have a hard time on that landscape.

I talked to a local when I stopped to buy my kids some candy.  She said that sometimes they were shipping off small bands of the wild horses to places like Montana and Wyoming, where there was more grass and predators to control the population.  She wished that they could dart the stallions and make them sterile.  The basic problem is that the horses keep breeding and there is not enough predators to keep the population down, nor grass to keep them alive.

I don’t know what the solution is for the wild horse.  I know the ideas we have come up with are not working.  I know that I don’t want them to die, and I still want them to range free, somehow.  It makes me very sad, and I wish I could save all of them.  I feel Wild Horse Annie’s passion tugging at me to take action, but I am not sure how yet.  The only thing I can think is to put pressure on the Senate not to accept the mass execution of the surplus horses.  But what, then? 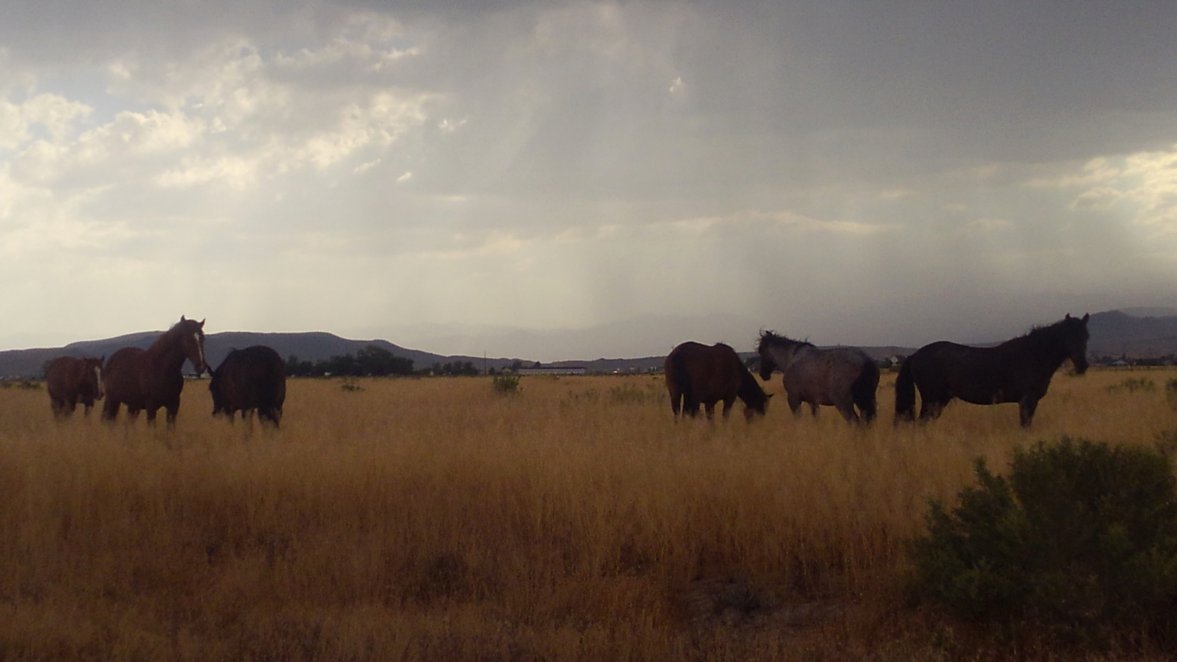 One thought on “Nevada’s Wild Horses”