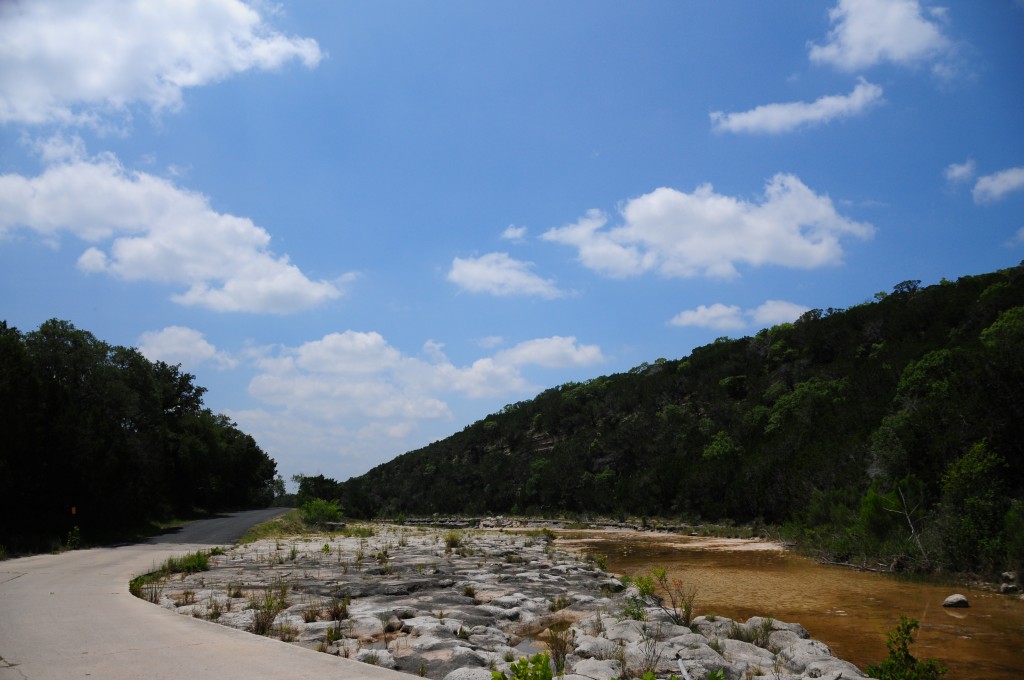 We had a single purpose when we went to Burnet, a single purpose that had morphed into other diversions but was our sole motivation for our journey. So here it was, Sunday morning, and it was time for the main event.
Only, things weren’t going well right from the start. There was an incident with the screen door at the place we were renting. There was an incident involving the wine that almost cost us the entire bottle. We had no breakfast with us, because what I brought for Saturday was not enough, and so we had eaten Sundays ration as well. There were some other personal issues. J said we should have just gone back to bed and started the day over. Plus, we were a little behind schedule if we wanted to find a place to have breakfast along the way.
Turns out there is NO breakfast along the way to where we were going, just thirty minutes of road and farm houses along the dried out banks of Lake Buchanan. Several properties for sale. We finally decided to bite the bullet and dine at the overly-priced but very good buffet at the Canyon of the Eagles Resort. This resort was just a couple miles up the road from our main destination, the Vanishing Texas River Boat Cruise.
On occasional Sundays, this boat line offers a special trip for bird lovers called the “Freedom Flight”. A San Antonio raptor rehabilitation service comes out with birds they have nursed back to health that are ready to be returned to the wild. For each bird, a person on the cruise is picked to be the one to hold the bird before it takes its farewell flight.  We were very excited about this, being fans of the birds of prey.
I should have known something was up when I observed there were so few cars in the parking lot at check in time. When we went inside, there was some tension going on, and the employee behind the counter was frantically on the phone trying to figure out how to resolve the issue. A few ladies inside gave me the run down: basically, there was some kind of “emergency out of town trip” by the cruise line operator, and so the Freedom Flight had been rescheduled for NEXT Sunday. Turns out there was an email sent out July 22 that served as notification. J and I searched my email to find it, and he saw what I saw when I had gotten the email – it appeared to be a confirmation of the cruise I already knew I had reserved. It wasn’t unless you clicked on the link in the email to view your tickets that one could see that the original date was crossed out, and the new date subbed in.
Man, we were disappointed. We had spent a considerable amount of time and money to get to this point, only for this big let-down. We weren’t going to be able to afford to spend those same resources the following weekend. So, we did the only thing we could to get our minds off this: geocache all the way home. 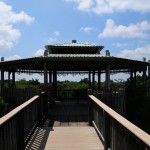 We picked a scenic route home that took us through the Balcones Canyonlands National Wildlife Refuge. I didn’t even know about this place, but I am glad I do now. This gazebo was the site of a virtual geocache, and while we were there, I read this sign that shared some interesting information about the preservation work going on at this NWR.
There are two birds that depend on this ecosystem for survival, the golden-cheeked warbler and the black-capped vireo. There is this other bird, the brown-headed cowbird, who is a nest parasite. The cowbirds will take over the nests of the vireos, puncturing their eggs and knocking them out of the nest, replacing the vireo’s eggs with eggs of their own. The eggs will hatch, much to the surprise of the vireo, who is now taking care of babies that look suspiciously unlike her. At the refuge, the rangers try to manage this by building traps for the cowbirds – a big aviary, much bigger than even the feral hog traps that you see at parks in Texas. There is some information here on the different trapping methods and how to become certified to trap these birds by the TPWD.
The cowbird has been increasing in prevalence and dramatically altering the number of songbirds that make it to maturity in this day and age. The reason  has to do with agricultural practices of people. The cowbird used to follow the buffalo herds and therefore move through an area, but now with livestock penned up in pastures, the cowbirds stick around. By the 1980s, they were preying on black-capped vireo nests at a rate of 90%. Since the inception of the trapping program, the parasitism was reduced to less than 10% by 1999. I am very fascinated by this example of how humans altered the behavior of a species, and how we have managed to turn that around in a positive direction. 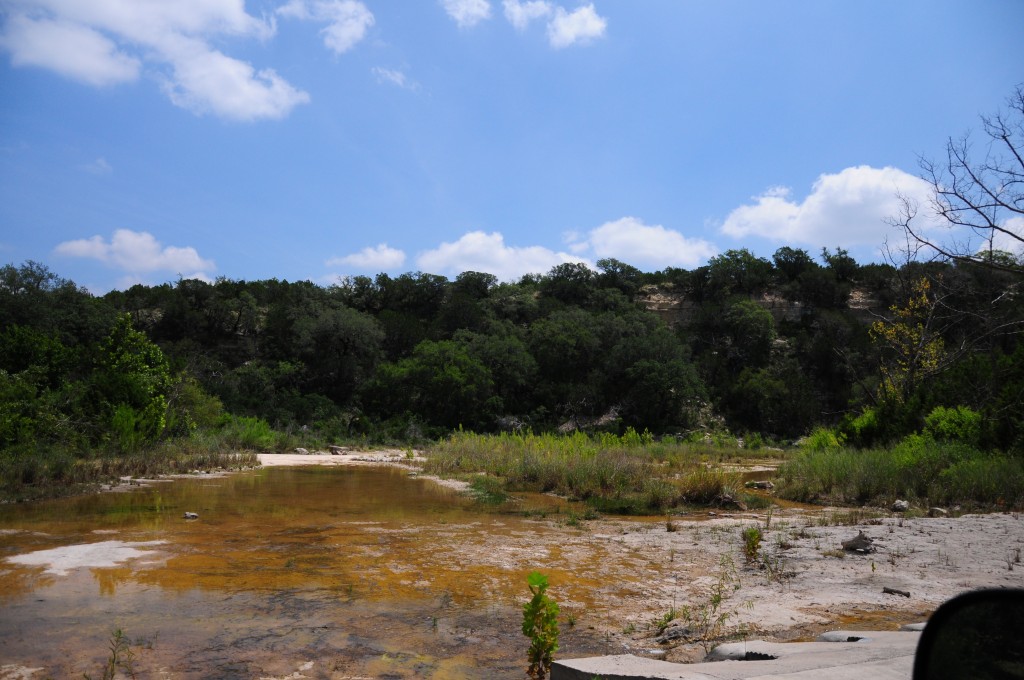 The drive was also quite pleasant. I was able to drink a little of the salvaged (and now frosty) wine. All we were missing were some Willie Nelson CDs (or any CDs – neither of us had any music along with us, and I think we could only get a country station in now and then). We drove south from Bertram to the Highland Lakes area north of Austin via the Cow Creek Road, and saw nary a car or another person along the way. We stopped a few times. We were able to shelve our disappointment and enjoy the trip.

There are four access points for the public to the NWR, and two of those have hiking trails: Doeskin Ranch and Warbler Vista. It was a little hot during midday for a long hike, but we did explore a little. We also hit a small section of a “power trail” of geocaches very close to the Warbler Vista entrance. After a while of this, we were too hot to continue and decided to just come on home.
But, we will be back. We have to at least return to Burnet in the fall – I managed to get our tickets exchanged for a different date later this year. So the trails of the hill country will have to wait until then. It might even be better then, because the bald eagles will be nesting during that time.

So goodbye Burnet, Balcones, birds, and the hill country – we will be back soon!