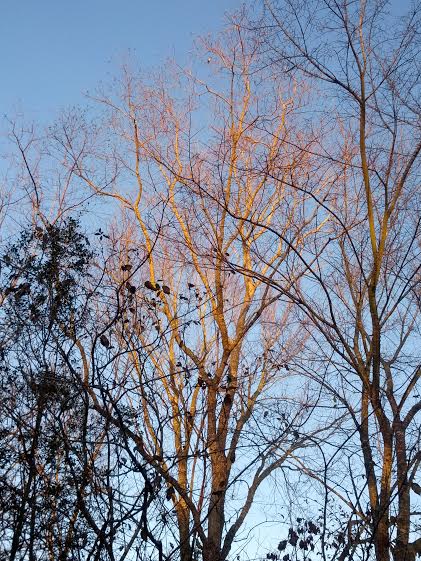 Something I gained a new appreciation for on this morning walk, just as the sun was gaining ground in the sky and light was pushing out the darkness, was the peacefulness that sinks into one’s soul after spending some quiet time in nature.  Sure, I was in an urban environment, but it didn’t seem like it.  Natural elements were still all around us.  I walked the dogs past a little pond near by house that has a colony of Musgovy Ducks in it.  There was a Great Blue Heron that caw-ed a deep, raspy sound when we walked by, annoyed at having to move to the other side of the lake to escape from the dog danger.  Zero fucks were given by the ducks, who continuing to lay in the grass languidly, or moved in slow, gentle movements across the surface of the pond.

We turned a corner and skirted the edges of a creek. I marveled at the amount of bird calls all around me, and lamented not bringing the binoculars (would have been too much to carry and handle the dog leashes/picking up after them). Little birds flitted in and out of the trees and shrubs nearby. I heard a light “swooshing” overhead, and a flock of quiet black birds were crossing the sky.  Some, like this Northern Mockingbird here, just did not care I was passing right by her, even holding still for me to take her picture: 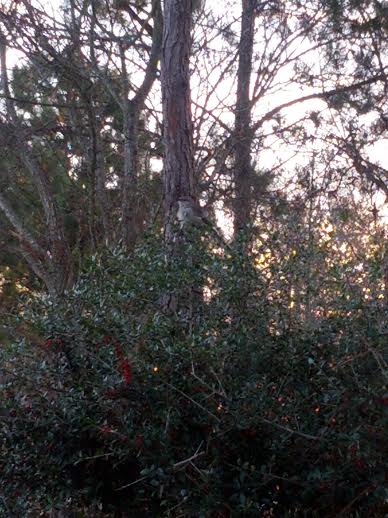 The mockingbird might seem near and dear to us, because of its ubiquitousness and the fact that it is our state bird, but we shouldn’t feel so special about the latter.  It is also the state bird of Arkansas, Tennessee,  Florida, and Mississippi.  It is also interesting to note that the mockingbird is one species that is urban-positive, meaning that it appears in greater numbers in areas that are urban compared to rural/non-urban.  It is not clear to biologists yet if this is a good thing or not; e.i. if this species is falling into an ecological trap or just benefiting from the constructs of man.
Later, I came upon another mockingbird, and took this video. She was singing this song as I came upon her, and kept on even though the dogs and I were directly below.  Possibly it was a male – the males are slightly bigger than females, but that is the only difference.  The males might sing more often and longer to attract mates; the singing repertoire is a means of sexual selection in both males and females.

I realize this video is sideways, can’t seem to edit it on here.  It does not detract from the quality of this Northern Mockingbird’s song, though.  I myself had tended to take the mockingbird for granted, but after pausing to listen to this one’s song for a while and learning some information about them, I gained a new appreciation for them.
Another thing I gained a new appreciation for was both this little oasis in a section of nearby neighborhood, and the benefits to sitting still in nature for a while. I have always like this one little area where the developers decided to put in a little garden with stone steps leading up to a small bubbling fountain and a variety of plants and trees. There used to be a poorly maintained cache there, which has been replaced with a well-camouflaged one.  I sat down on the edge of the fountain, dogs resting their bums on the dampened dirt gravel path, so I could listen to the birds and try to identify some.

A few mourning doves flew off as I approached, but soon the trees around me, like the one in the picture at the top of this entry,  were besieged by smaller birds who were peeping and twittering among themselves.  Their breasts seemed to glow golden in the morning sunlight then fade to a yellowish as they turned to the side, little crowned heads bobbing up and down.  I finally figured out after much watching that they were Cedar Waxwings.  Very cool.  When I got up to leave, my whole body felt so relaxed, free of pain or discomfort.  It was very soothing, and that is a moment I will hold on to during the stress of the work week.  I need to go back there often, both to watch the birds and to get that feeling, a feeling like I had just come from a massage table or drank a few glasses of wine. 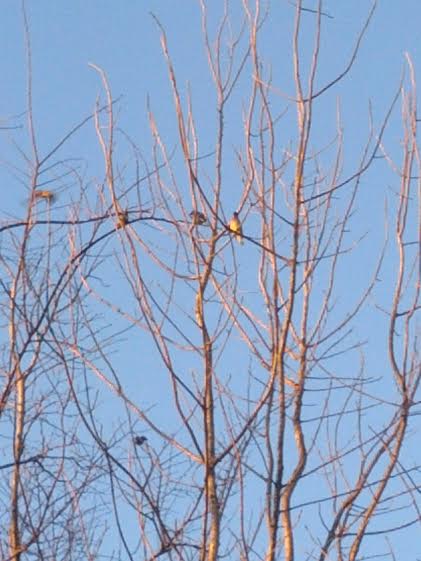 All this activity made me think about a few things.  I thought about Rachel Carson’s book “Silent Spring”, and what it would actually feel like to live in a world absent of birds around us.  I thought about Italy and Albania, where hunters are literally wiping out all the migrating birds, where one can walk for hours and not hear birds at all.  I rationalized my recent obsession with birds by listing the reasons in my head why they were compelling: curiosity about the world around us, the true free nature of birds, the concept that they are a sentinels – a group of animals that can stand as indicators of the health of our environment.  Part of my interest is because of J, because he has taught me to look up instead of down, to be happy instead of miserable, to reach for my dreams instead of wallowing in lost chances, to pay attention to the marvels of the environment around us instead of being stuck in an inner dialogue.  Those are the reasons why I am carrying around a “Birds of Texas” book and recording species observed lately.

This week, I was able to identify at least one of the hawks seen along my commute as a Red Tailed, and also spotted an American Kestrel sitting on a utility pole.   Also, I had some sightings of birds (Blue Jays) out the window during a work meeting,  Earlier in the week, the kids and I were at the museum downtown, and a bird was on the porch peeping and seeking food in the dirt that I am fairly certain was an Eastern Towhee.  So new species recorded for the week include that hawk, kestrel and towhee, the Muscovy Ducks, Northern Mockingbird, Cedar Waxwings, and Mourning Doves.  Species count update: 27.

4 thoughts on “Daybreak in Seven Meadows”